Zaha Hadid Architects has completed Eleftheria Square, a public park that runs alongside the historic Venetian Walls of Nicosia, Cyprus.

The multi-level Eleftheria Square is built within a section of the dry moat that, together with the Venetian Walls, marks the boundary between the oldest part of the city and the new neighbourhoods that surround it.

The architects’ ambition is for the park to be the first stage in creating a “green belt” around the perimeter of the old city.

As the Venetian Walls and moat extend across the Green Line that separates the Greek side of Cyprus from the Turkish occupied side, ZHA believe the project could become part of a reunification of the capital.

“ZHA’s transformation of Eleftheria Square weaves together Nicosia’s rich history with an unwavering optimism for the future,” said the studio.

“[The] design proposes these new public spaces within the moat are extended to follow the ancient city walls and encircle Nicosia, reconnecting communities of this divided capital,” it added.

The landscape incorporates a series of curving concrete bridges and access routes, which help to negotiate the change in level between the base of the dry moat and neighbouring streets.

The irregular geometries of these forms help to define the character of the various spaces, while also creating dynamism between the activities taking place above and below.

Patterned markings divide up different sections of the granite paving and provide the shapes of different elements within the landscape, including benches and planters.

“Transformed into an urban park, the moat’s fluid geometries have been created through the process of triangulating the irregular forms of the ancient fortifications to establish points of intensity that define seating, flowerbeds or water features within the new park,” said ZHA.

“The moat’s granite paving conveys a timeless solidity, while open joints between the granite slabs create a passive rainwater drainage system that allows the new trees planted within the moat to naturally balance groundwater levels and reduce erosion of the medieval walls’ foundations.” 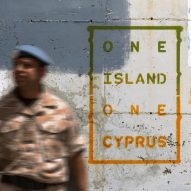 Eleftheria Square incorporates two cafes and also includes underground parking, as a way of freeing up more space above ground for pedestrians.

Now the largest urban plaza in the city, the space will be used to host a variety of festivals and public events.

It is the first project that ZHA has completed in Nicosia, although it is not the first modern design for this part of the city – the plaza is overlooked by the Jean Nouvel-designed Tower 25, which was completed in 2015.

Other recent projects by ZHA include a sweeping bridge for Vilnius railway station in Lithuania, a proposed expansion of the International Exhibition Centre in Beijing and the ME Dubai hotel.

The photography is by Laurian Ghinitoiu, unless otherwise indicated.