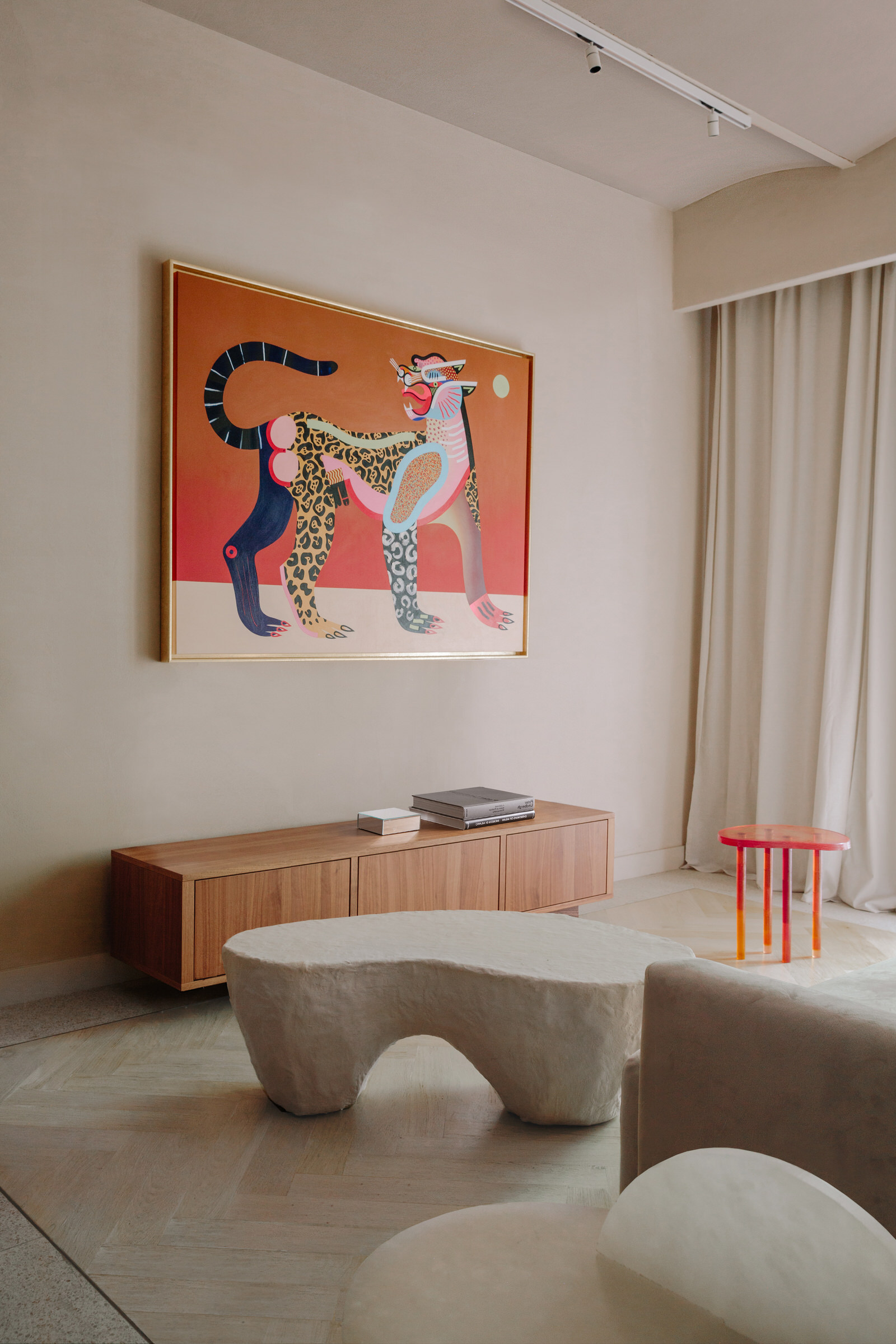 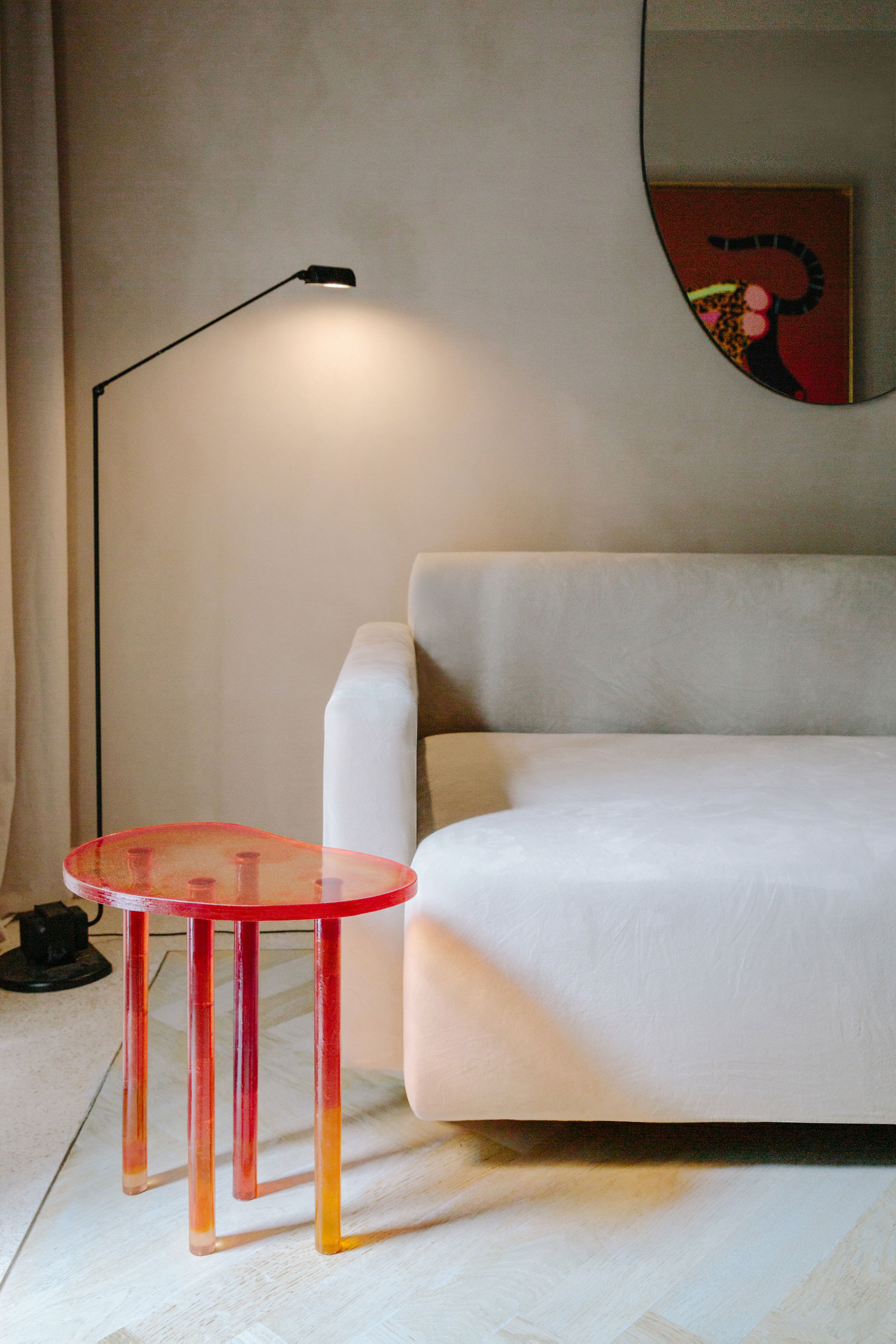 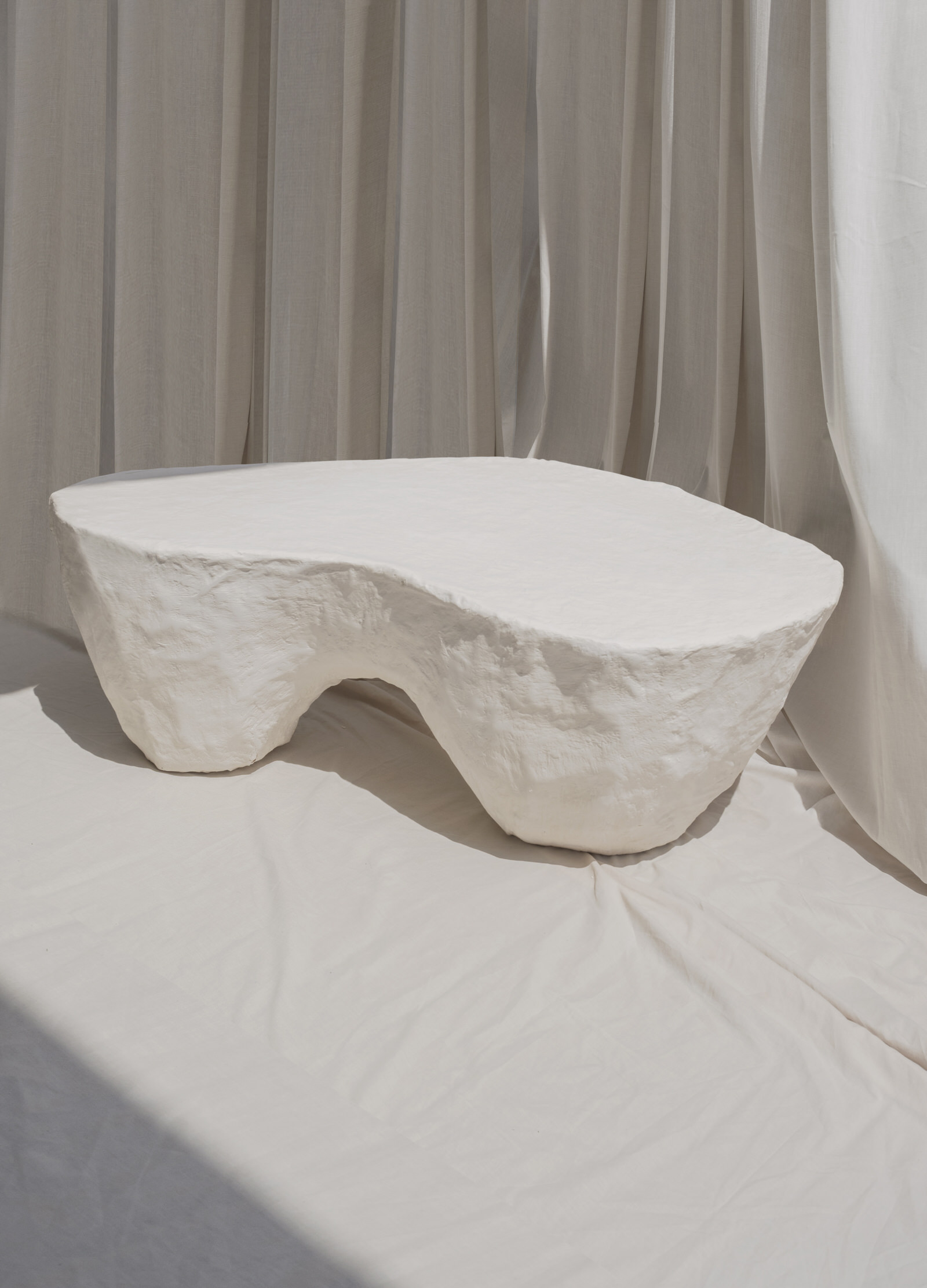 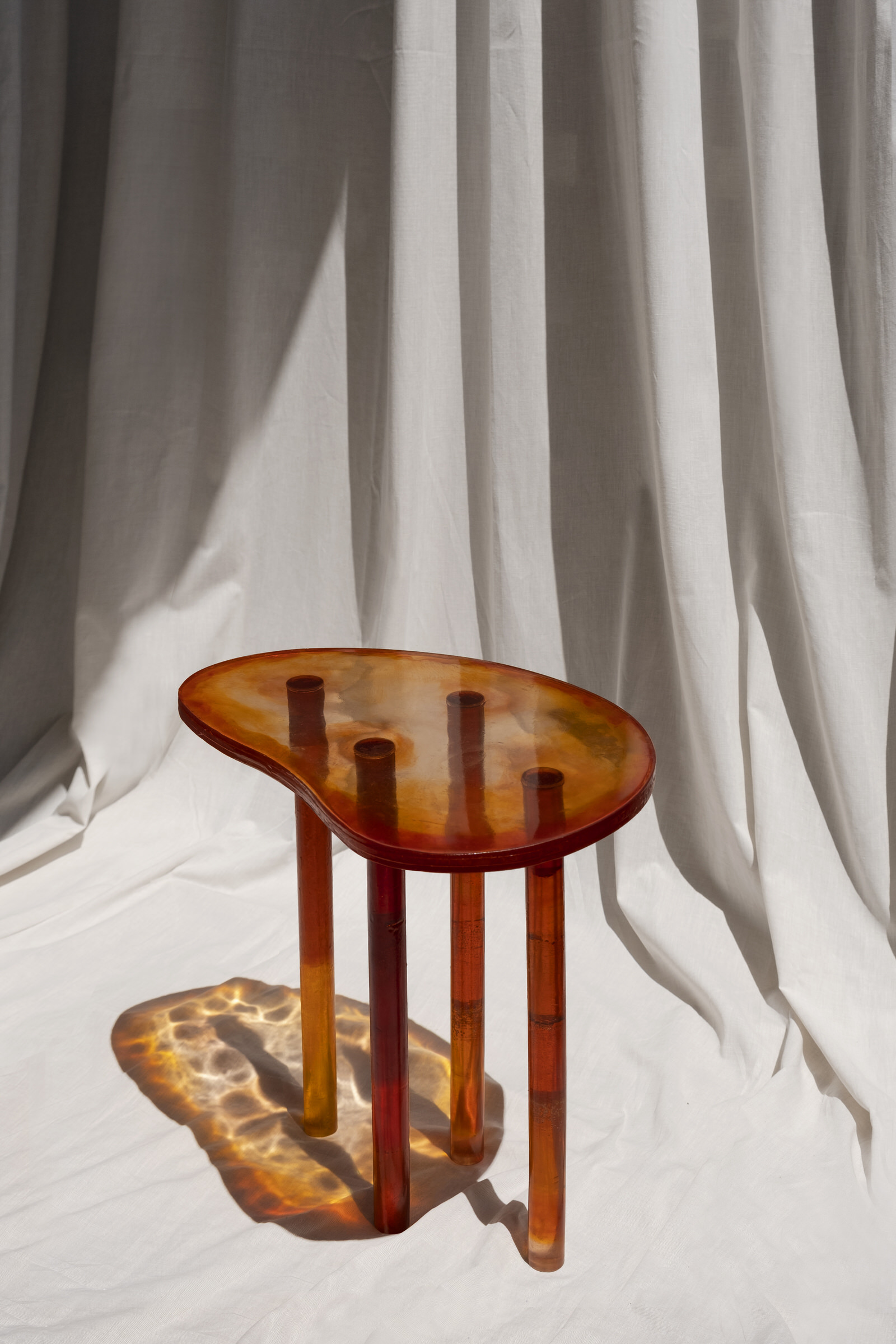 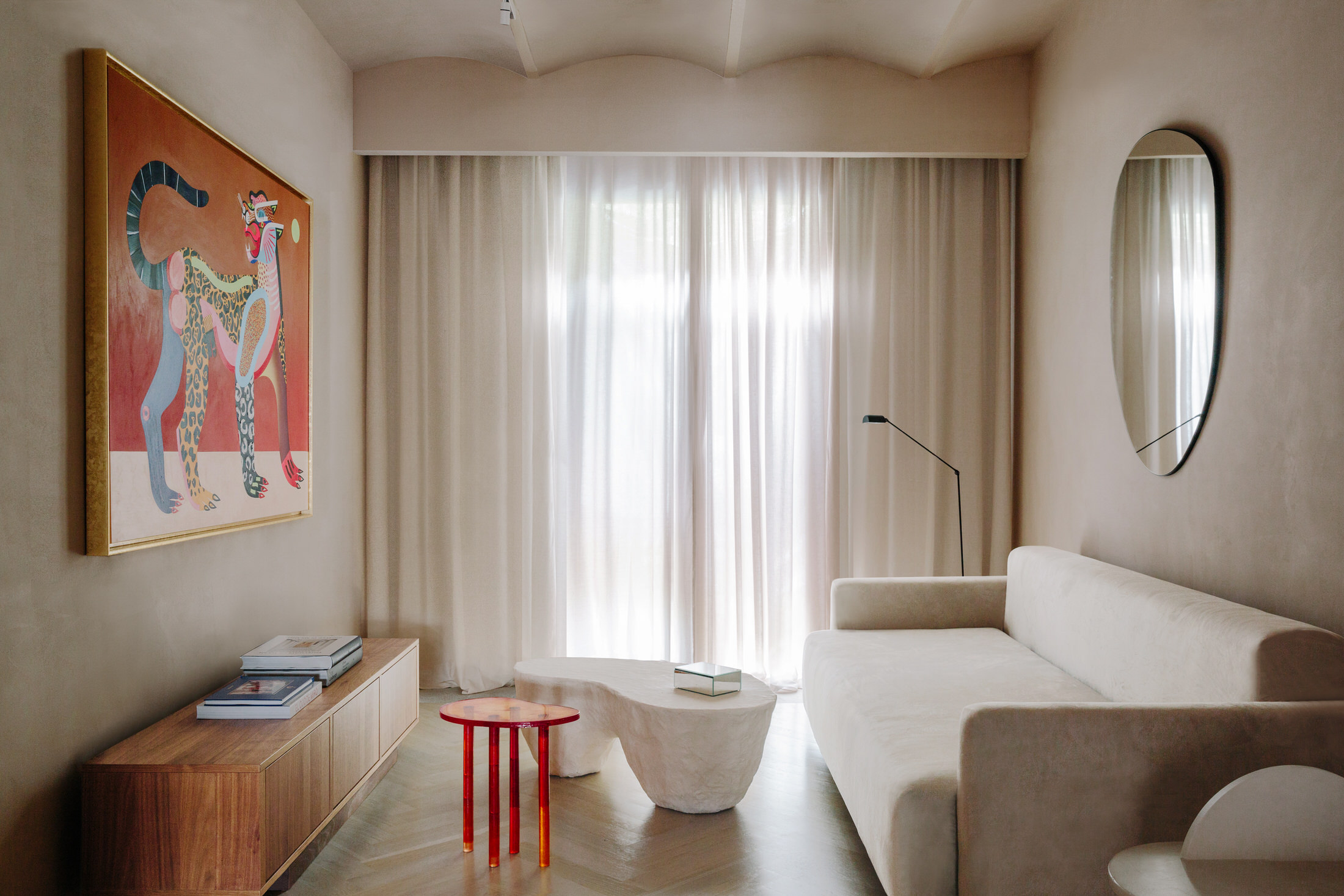 Within this apartment in Barcelona, Szymon Keller has executed a tactile vision of a lost summer on the Mediterranean. A refuge for a foreign couple who have made a home in the city, this intimate space plays out like a hazy dreamscape where Keller applied a figurative design language to the interior.

Located in a historic 19th-century building in the Eixample district, the petite 60 square metre interior was in need of complete resurrection. Sloped floors, crooked walls and deteriorated ceilings were a challenge, made worse by a claustrophobic layout and a lack of natural light.

Following an enfilade configuration, space was demarcated much like that of a hotel suite. An open plan living, dining and kitchen area sit at the front of the home with views overlooking the street while the bedroom is secluded, nestled within the inner facade. These private and shared spaces flow from one another thanks to a transitional bathroom connecting the two. With its sliding doors made of textured glass, natural light filters throughout the whole apartment. Circulation was reduced as the unique volume seems to ripple in all directions. 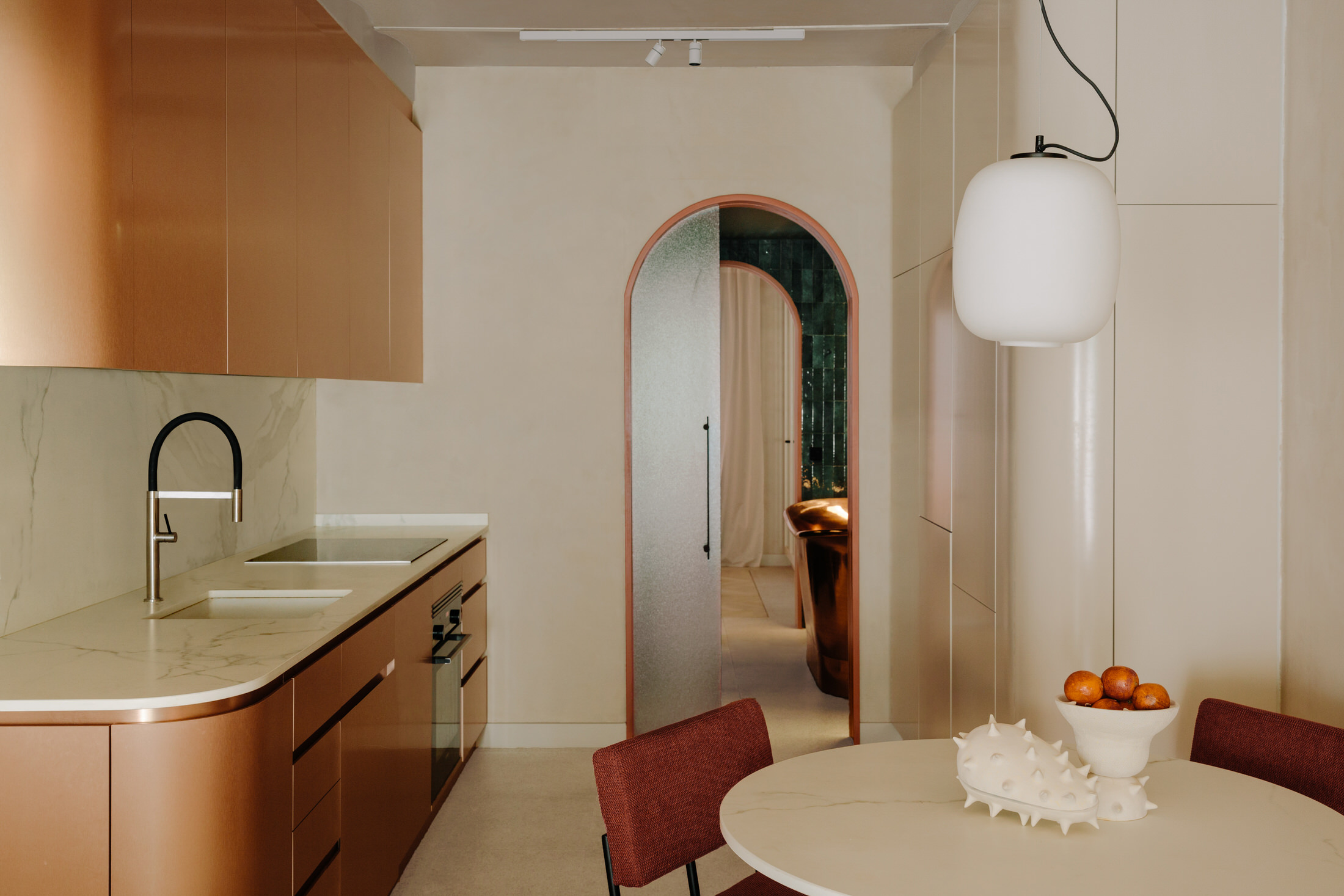 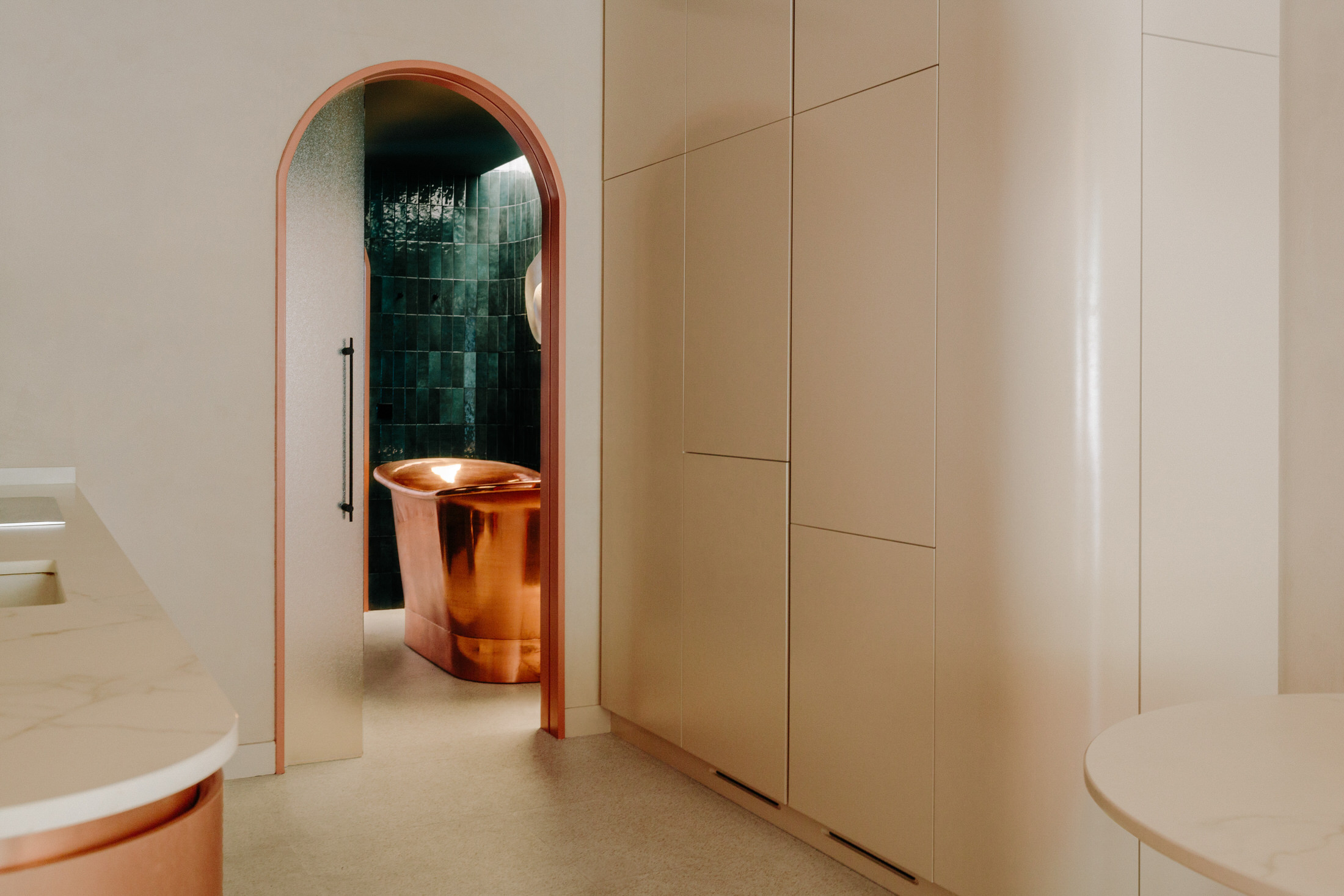 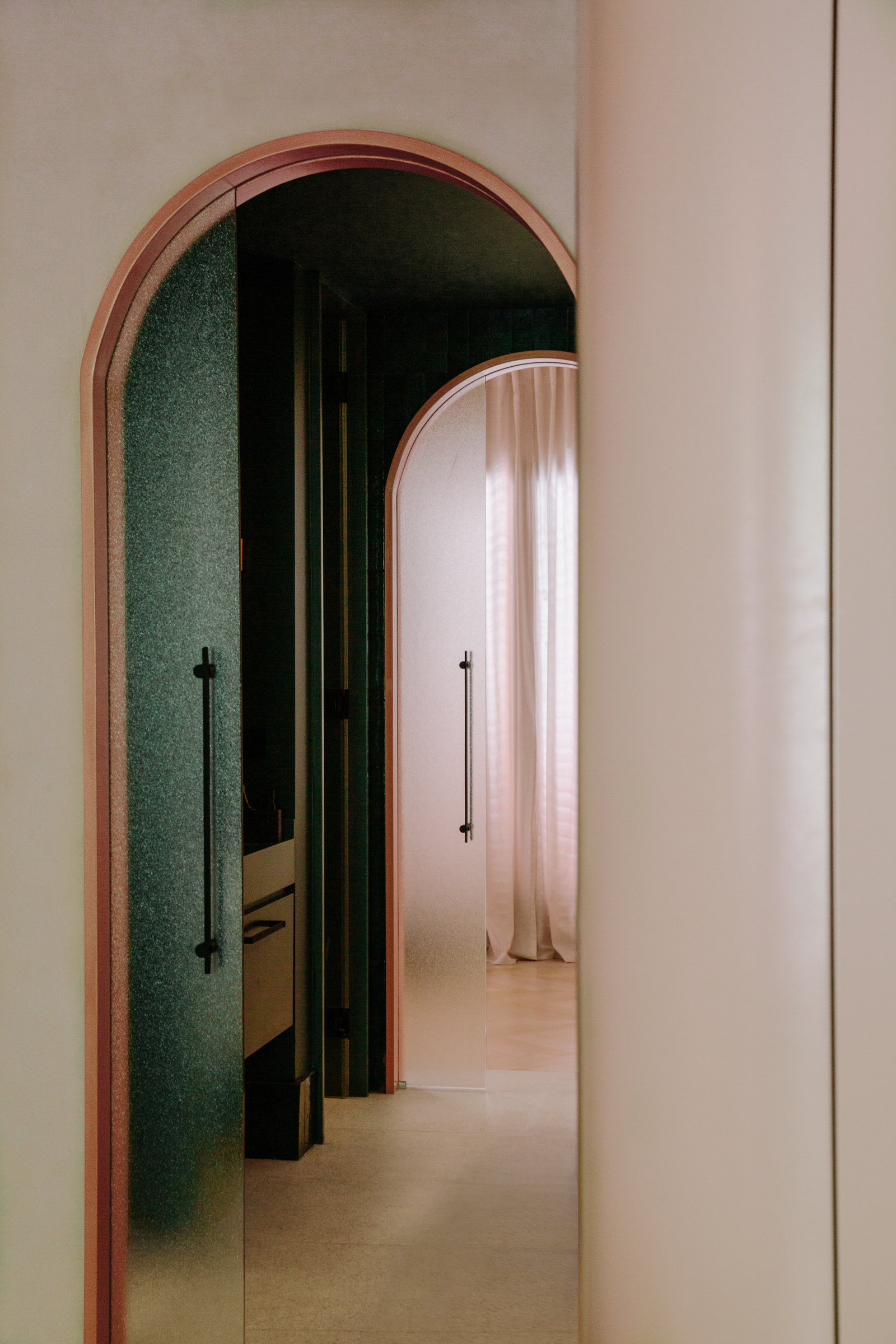 “Do you remember that summer night, at the sea,
under the moon?

I still dream of the rocks, sculpted by the sea.”

Drawing on poetic language, and his background in visual arts, Keller articulated sun-drenched vignette’s through a painterly approach. “This project was born as a dream’s vision, an ephemeral memory transformed into a timeless experience. The portrait-apartment is a concept that represents iconic elements of summer through an elastic conceptual interpretation,” elaborates the designer.

Organic shapes and curved silhouettes are pervasive — from arched doorways, a wavy headboard, curved corners and soft vaulted ceilings leaving an impression of rock formations shaped by the waves. The bathroom is contained between two arches that mark its symmetry, the curved corners embracing the bathtub at its centre, augmenting the sensation of private intimacy. 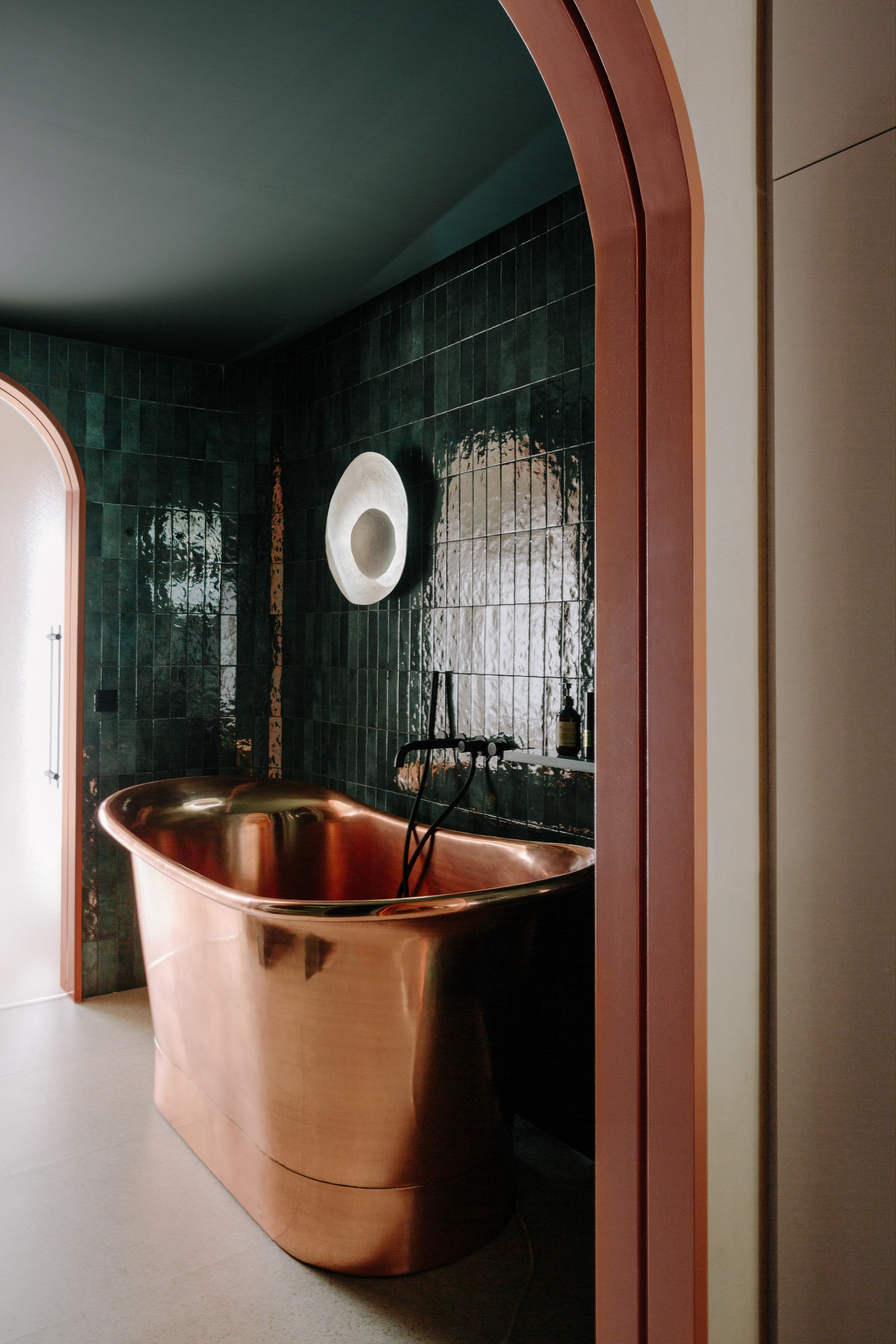 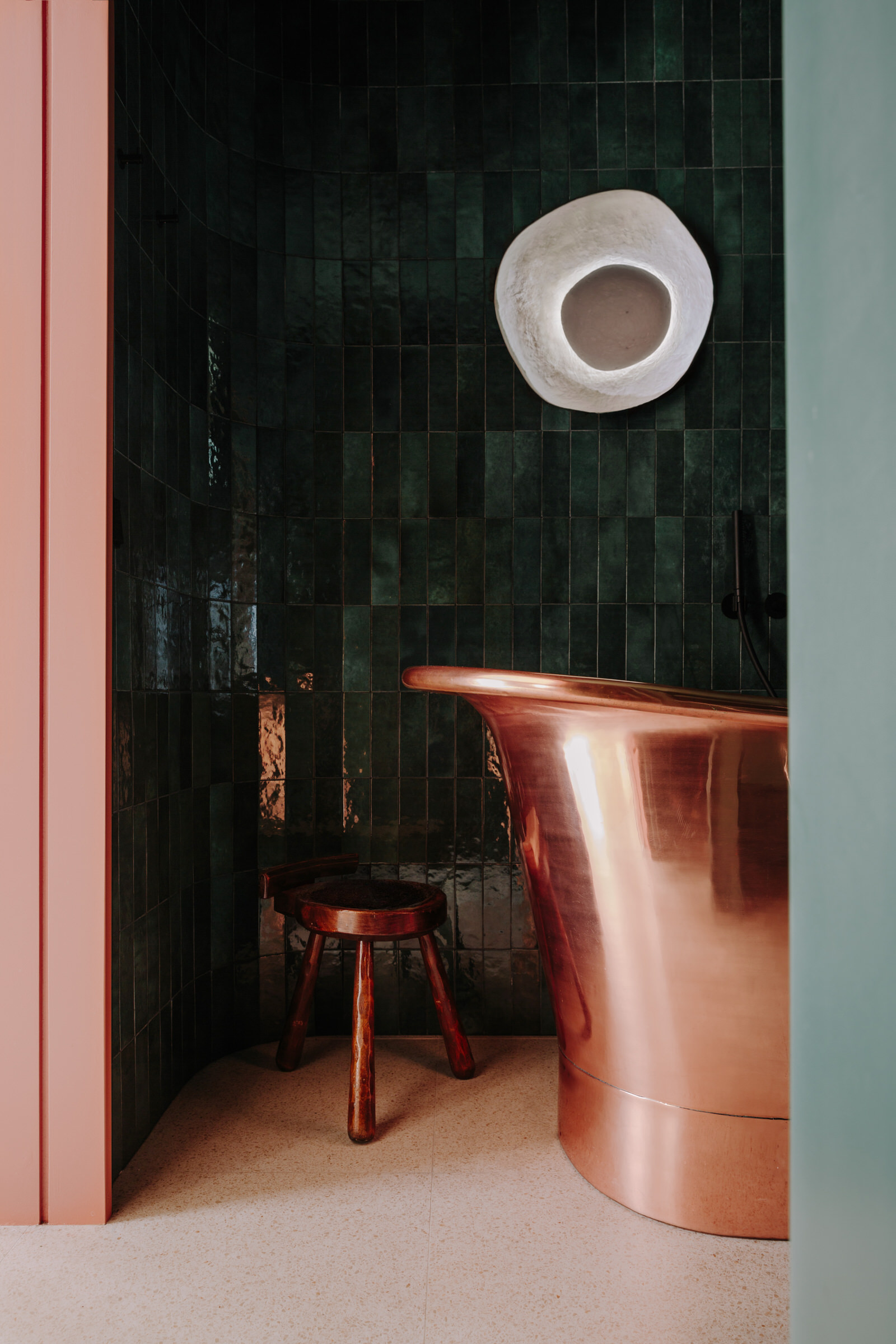 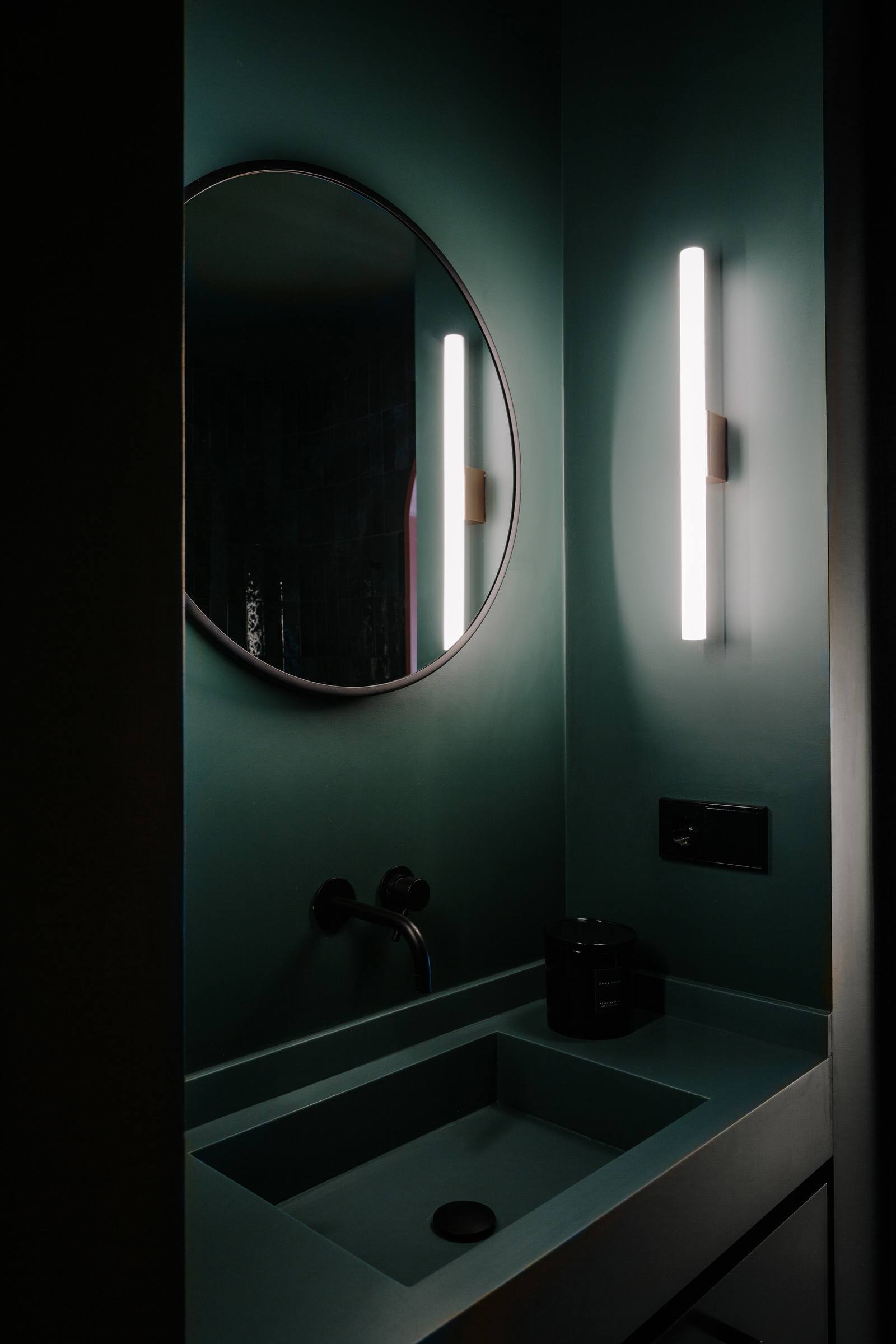 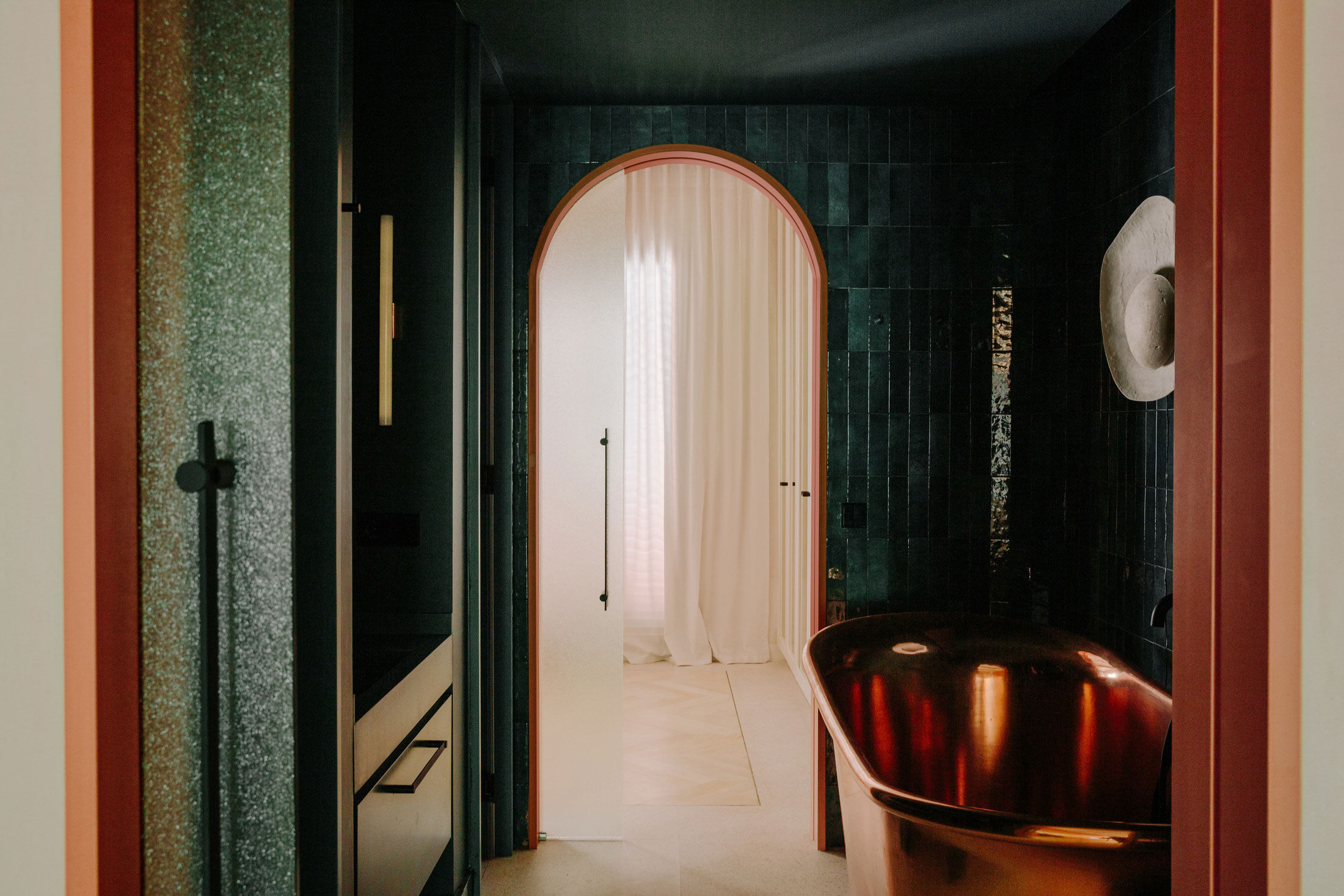 The bathroom takes a different tact inspired by the cool shades of the sea. The walls and ceiling glimmer with a bluish-green ceramic, while a free-standing copper bathtub glows in the mysterious darkness, like a golden fish. Intimately spa-like the dark interior marks a notable transition into the private areas. A wall sconce, designed by Keller in collaboration with Crea-Re Studio and fashioned from papier-mâché, symbolises the prominence of the moon, deformed as it is seen from the depths of the sea. 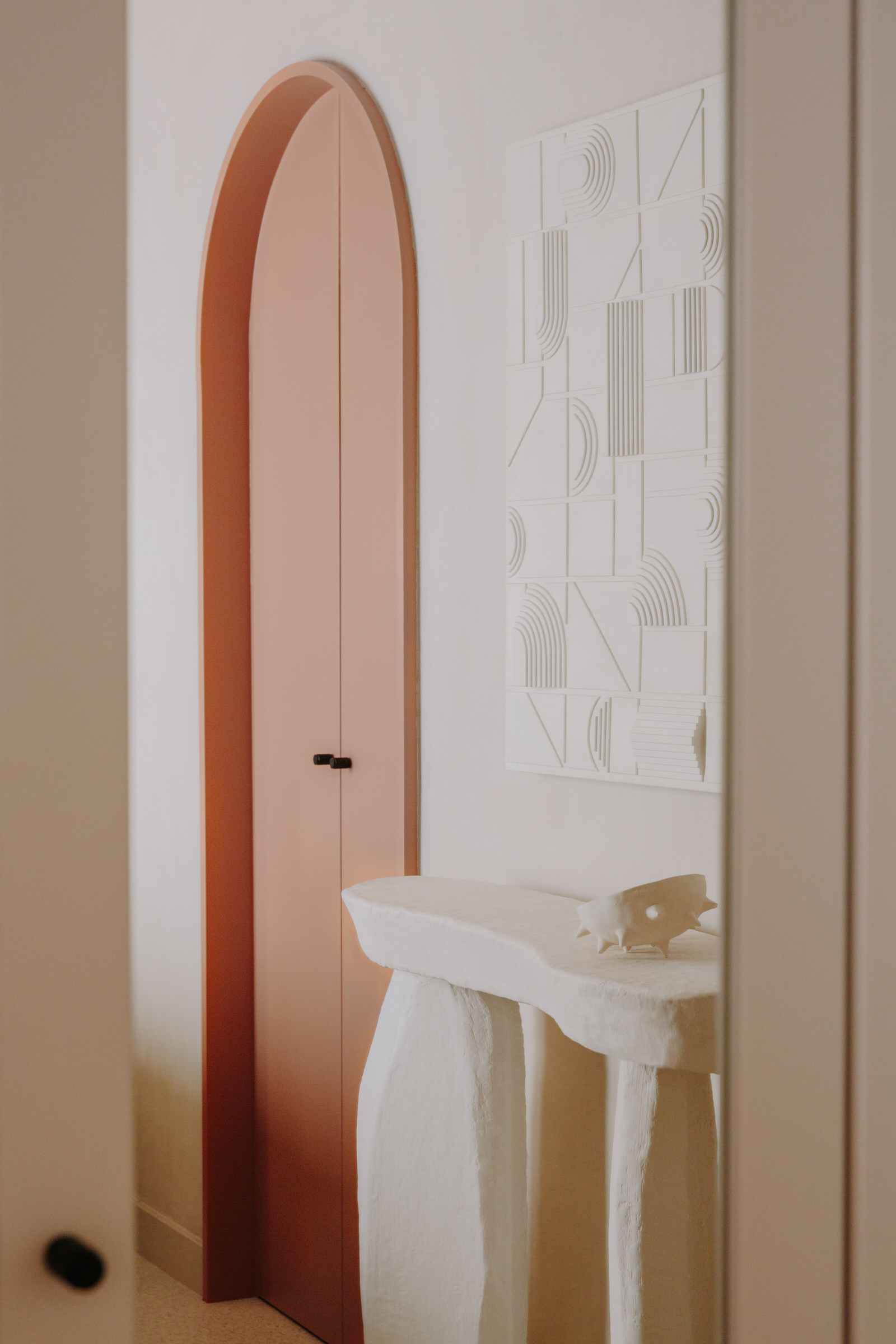 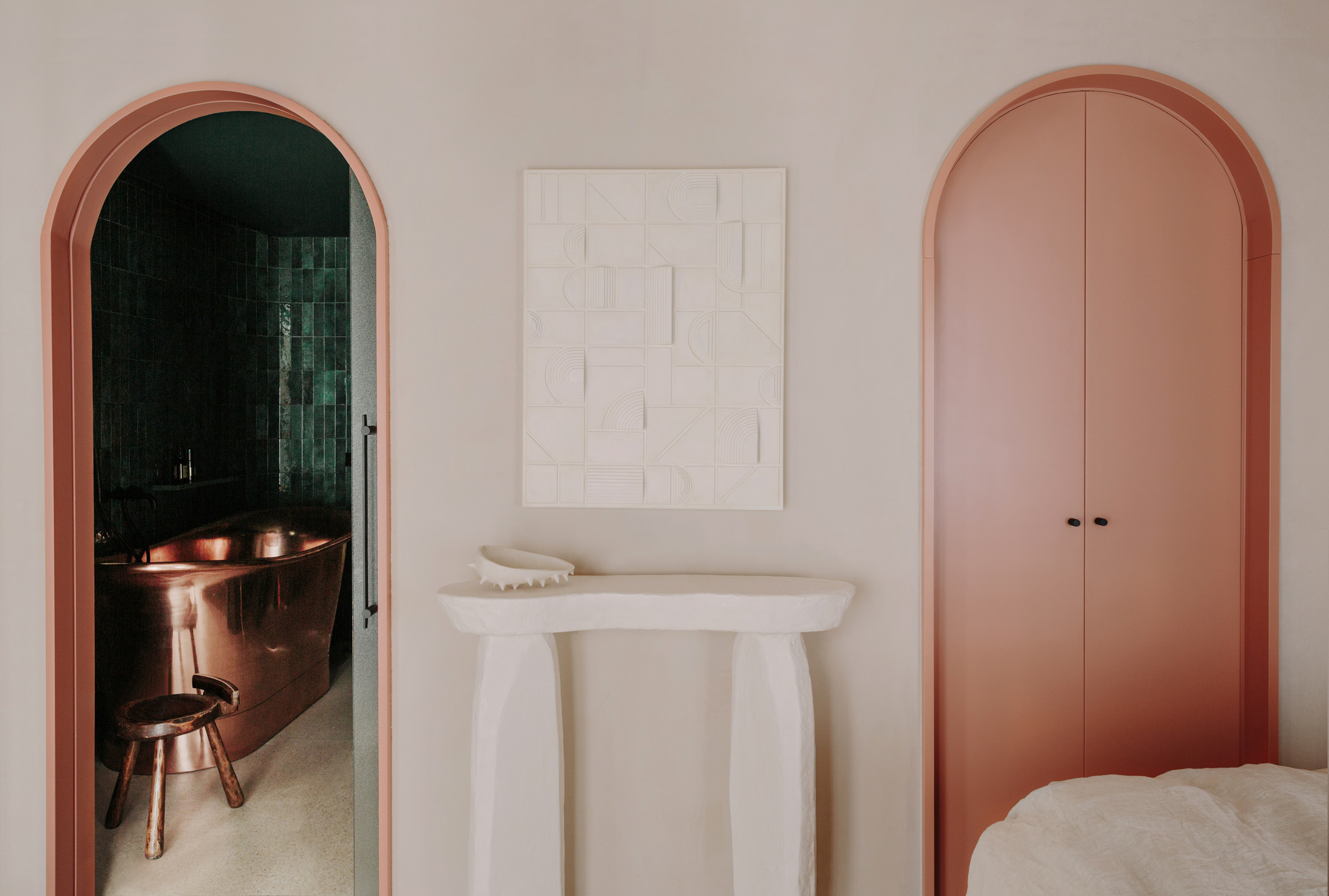 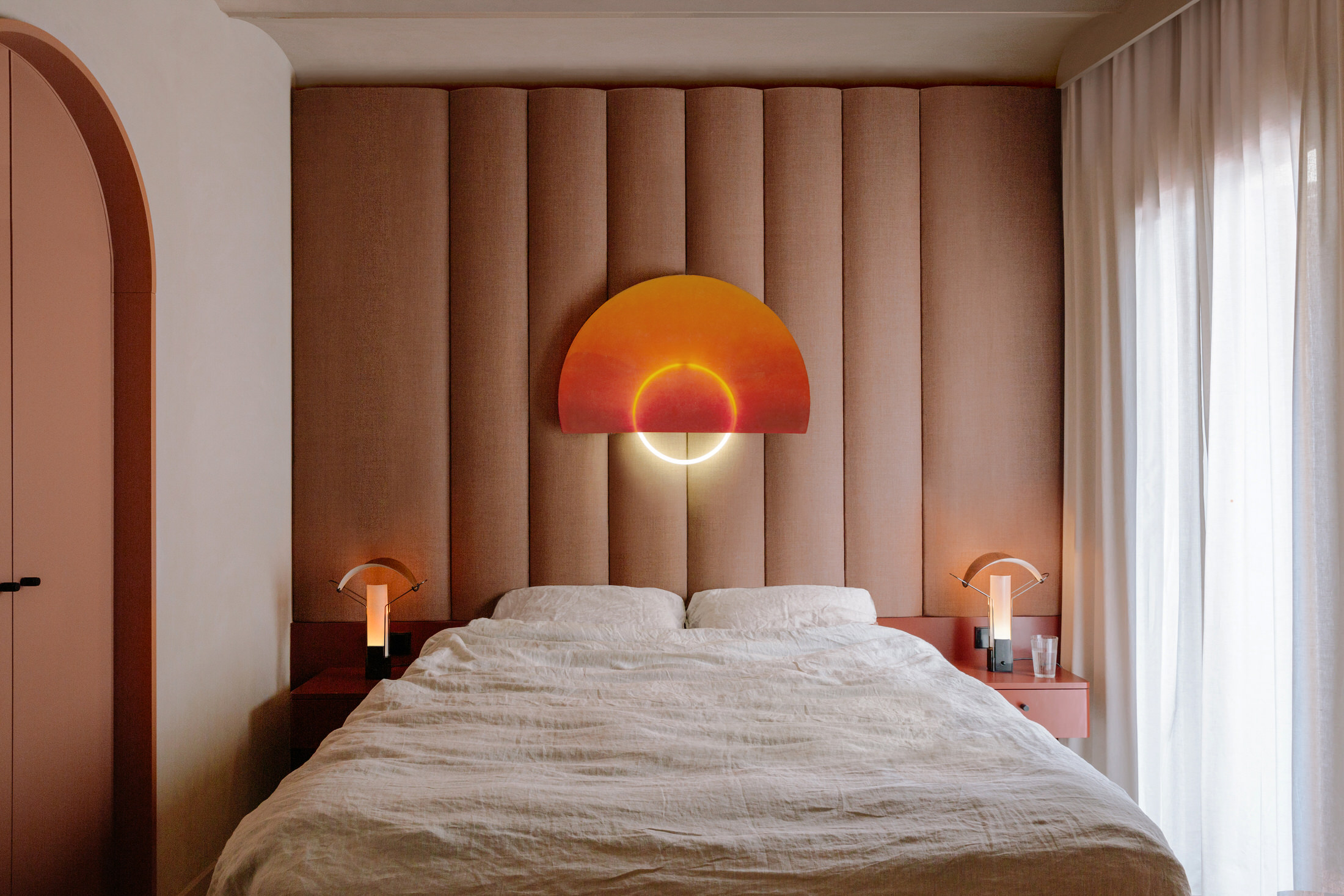 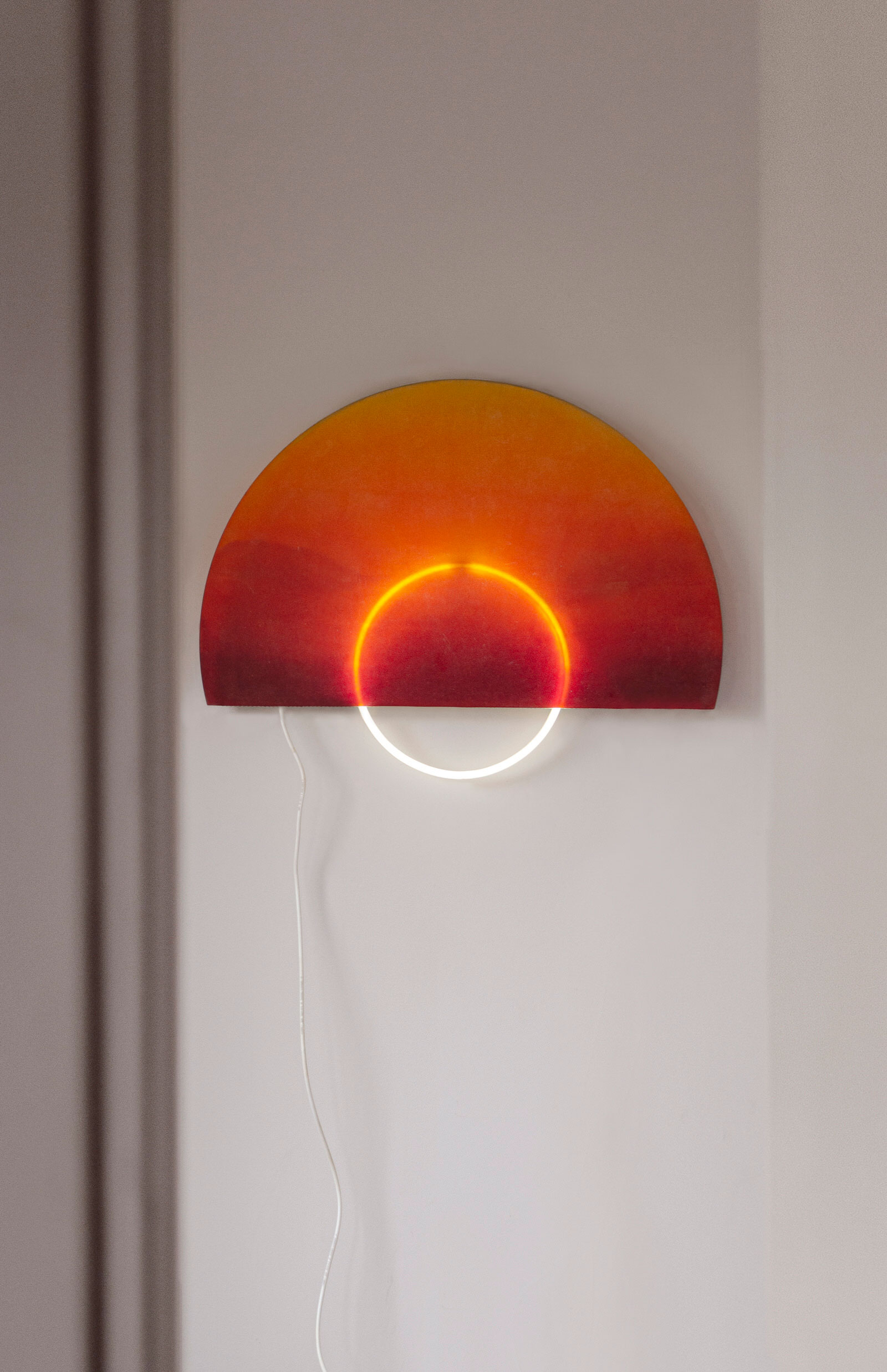 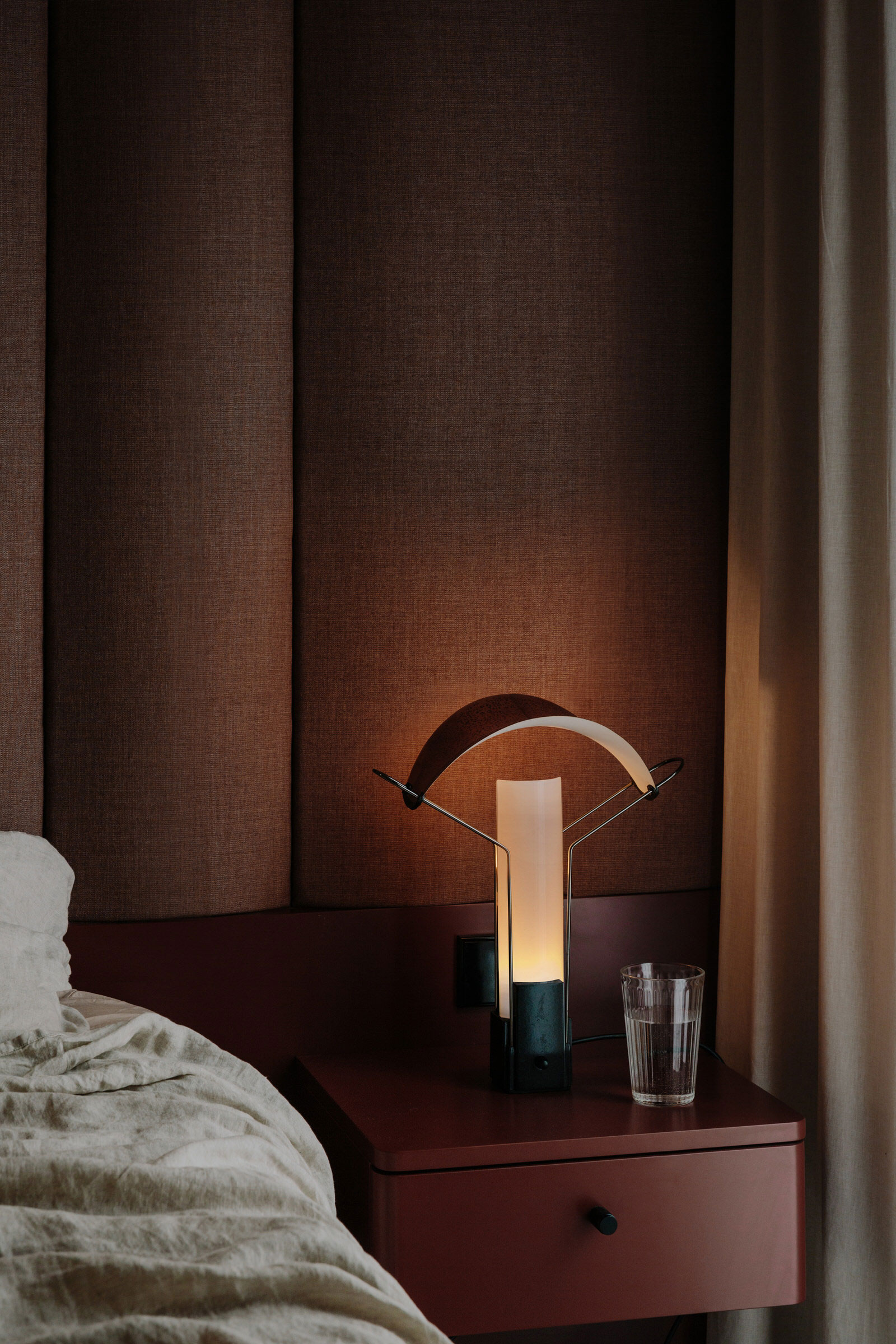 By custom designing many of the apartments unique pieces himself, Keller was able to truly execute his beach-inspired vision. In the bedroom where earth tones contrast with warm stucco tonality a resin and neon lamp called Sunburst completes the room — its reddish tones evoking a sunset. In the living room, Ruins is sculpted in white cement and resin, dripping in the history and decadence of the Mediterranean. While Lung with translucent amber hues made out of resin appears almost as a living being, responding to the existing organic shapes.

Contemporary objects and artworks offset the considered finishes and noble materials. Amongst them, highlights include a bright painting by artist Albert Madaula in the living room, sweetly on theme shell-shaped ceramic pieces by local artist Vito Montolio and a minimalist relief by Paul Bik in the bedroom. Both contrasting and complementing these objects add an element of joy to the polished interior.

Waves house is full of identity and intrigue, layering an intimate portrait of unexpected perspectives. “A home for lovers of summer, the sea and sunsets” the volume has been embedded with the changing tide of summer on the Mediterranean coast.

END_OF_DOCUMENT_TOKEN_TO_BE_REPLACED

| The article Waves House in Barcelona by Szymon Keller. appeared first on Yellowtrace. |