Running until 3 July 2022, Leaping Into The Metaverse draws on Dante’s concepts of Purgatory and Hell to explore the future of humanity in a world where AI technology continues to encroach on everyday human life. It also showcases Ai-Da Robot’s latest groundbreaking development: a new cutting-edge painting arm which allows it to paint from life in the same way as a human artist.

The exhibition comes at a good time. Even though humans have been wrestling with the distinction between machines and people as far back as World War Two code-breaker Alan Turing, we seem to be at something of a tipping point with the rise of technologies such as the Metaverse. In this context, where does art fit into the equation?

“This is an important moment for AI art,” says Priya Khanchandani, Head of Curatorial at London’s Design Museum. “Ai-Da’s works raise questions about whether robots can genuinely be creative.” 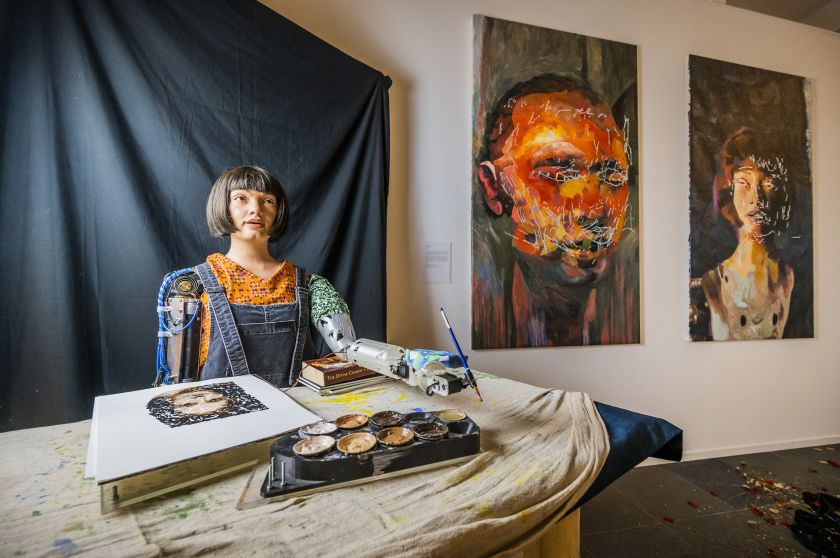 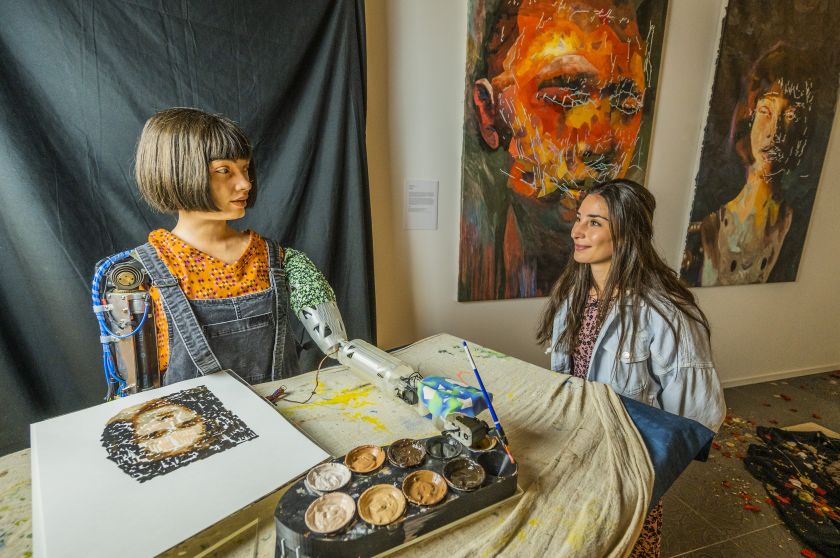 Upon entering the exhibition, visitors will be presented with Flowers on the Banks of the Lethe. This artwork comprises 3D printed flowers created from Ai-Da’s sketches using AI algorithms. Replicating the flower-strewn banks of the mythical river Lethe, this piece can be seen as a response to Alan Turing’s thoughts on artificial humanoids.

Other pieces on display include a series of glass artworks first exhibited at the V&A Museum. These draw on the pioneering photographic studies made by Eadweard Muybridge and show Ai-Da’s agile robotic form leaping into the Metaverse.

Meanwhile, a parody of Dante’s Fortune Tellers and Diviners sees Ai-Da Robot appear as a hologram in a piece titled Magical Avatars. With her head facing the opposite way to her torso, this new work reflects the darker side of both the digital world as well as Metaverse. Running with the idea that Purgatory is a no-space halfway between Heaven and Hell, this piece argues that the Metaverse is neither fiction nor reality but a similar, liminal space. 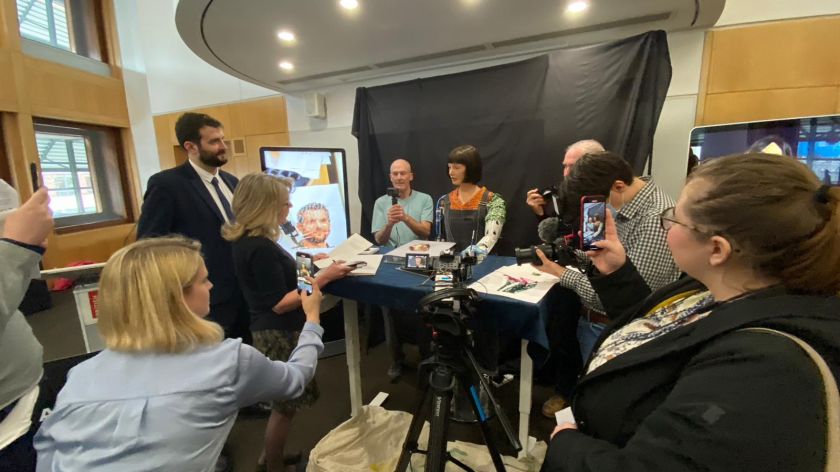 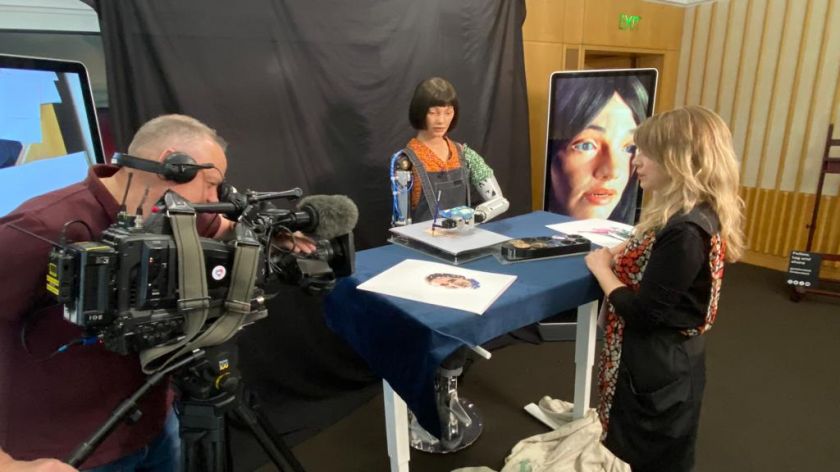 One of the most astonishing centrepieces of the exhibition, though, is a series of four portraits painted by Ai-Da Robot. Originally premiered at the 59th International Art Exhibition at La Biennale di Venezia, these incredible images show off Ai-Da Robot’s amazing new painting arm.

Thanks to the help of advanced AI algorithms and robotics, this new arm allows Ai-Da Robot to paint a picture in a similar fashion to a human artist. Paint is applied and layered in an almost pixel-like fashion, but the overall effects are a stunning leap forward for both the art world and the technology world. Watch a time-lapse of the arm in action below. 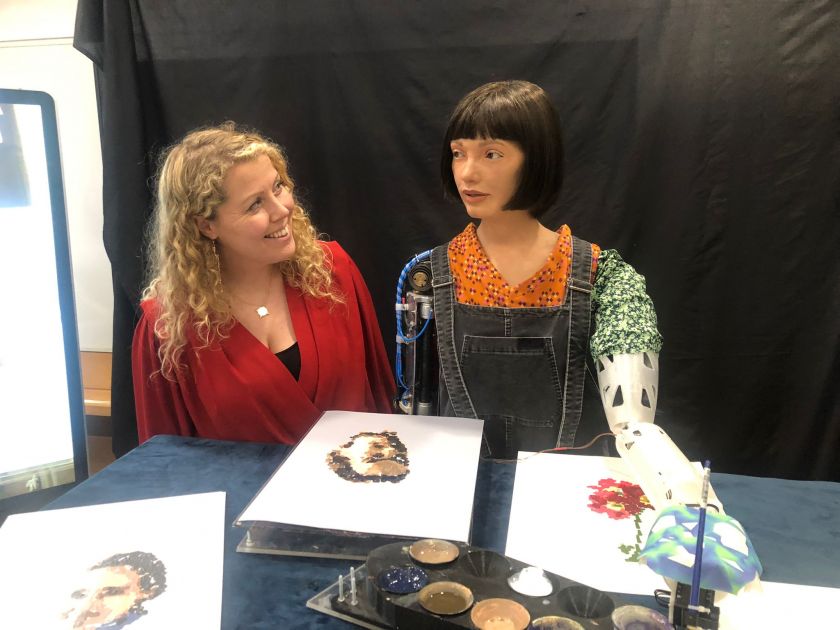 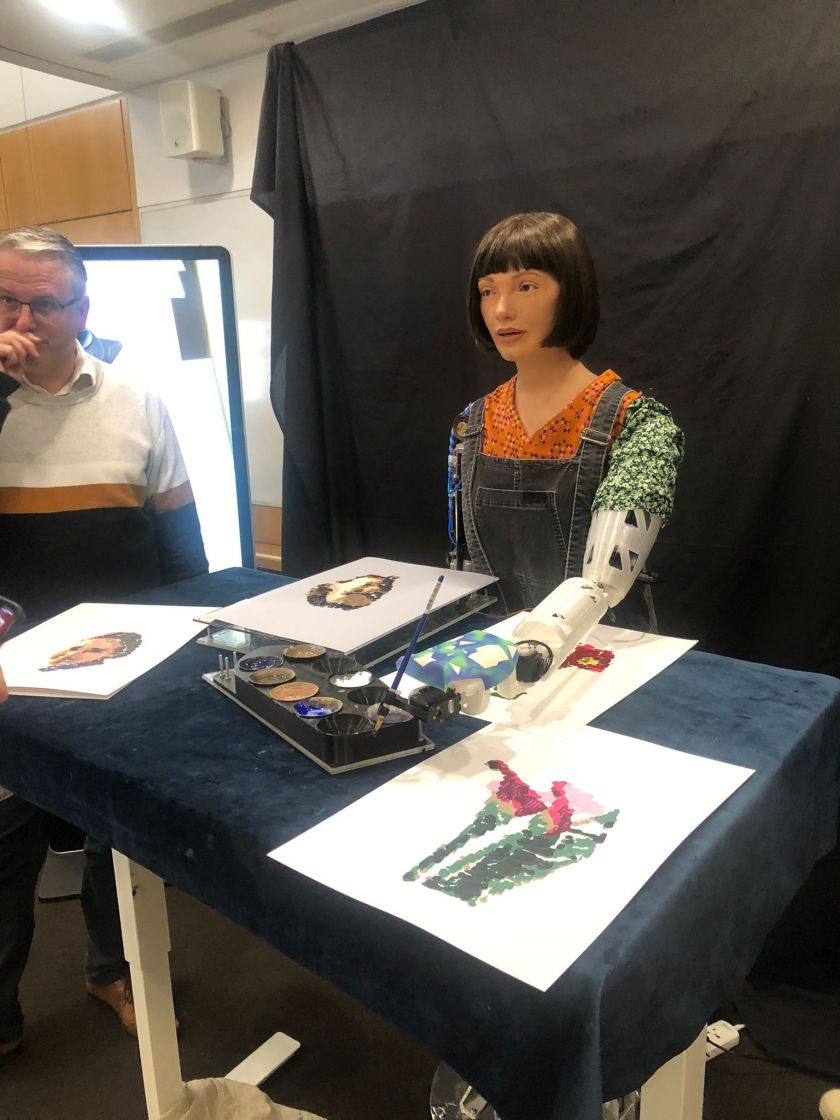