Browse the Architizer Jobs Board and apply for architecture and design positions at some of the world’s best firms. Click here to sign up for our Jobs Newsletter.

Subtractive manufacturing is an umbrella term for different kinds of controlled machining and material removal processes. These are either performed manually or more commonly, driven by computer numerical control (CNC). Subtractive methods can start with solid blocks or material forms made from metals, plastics, wood, or other materials that are shaped through boring, cutting, drilling, and grinding. This machining process spans from CNC methods to electrical discharge machining in hard metals, as well as laser cutting (for thermoplastics, wood, acrylic, fabrics, metals) and water jet cutting for plastics, hard and soft metals, stone, glass and composites. 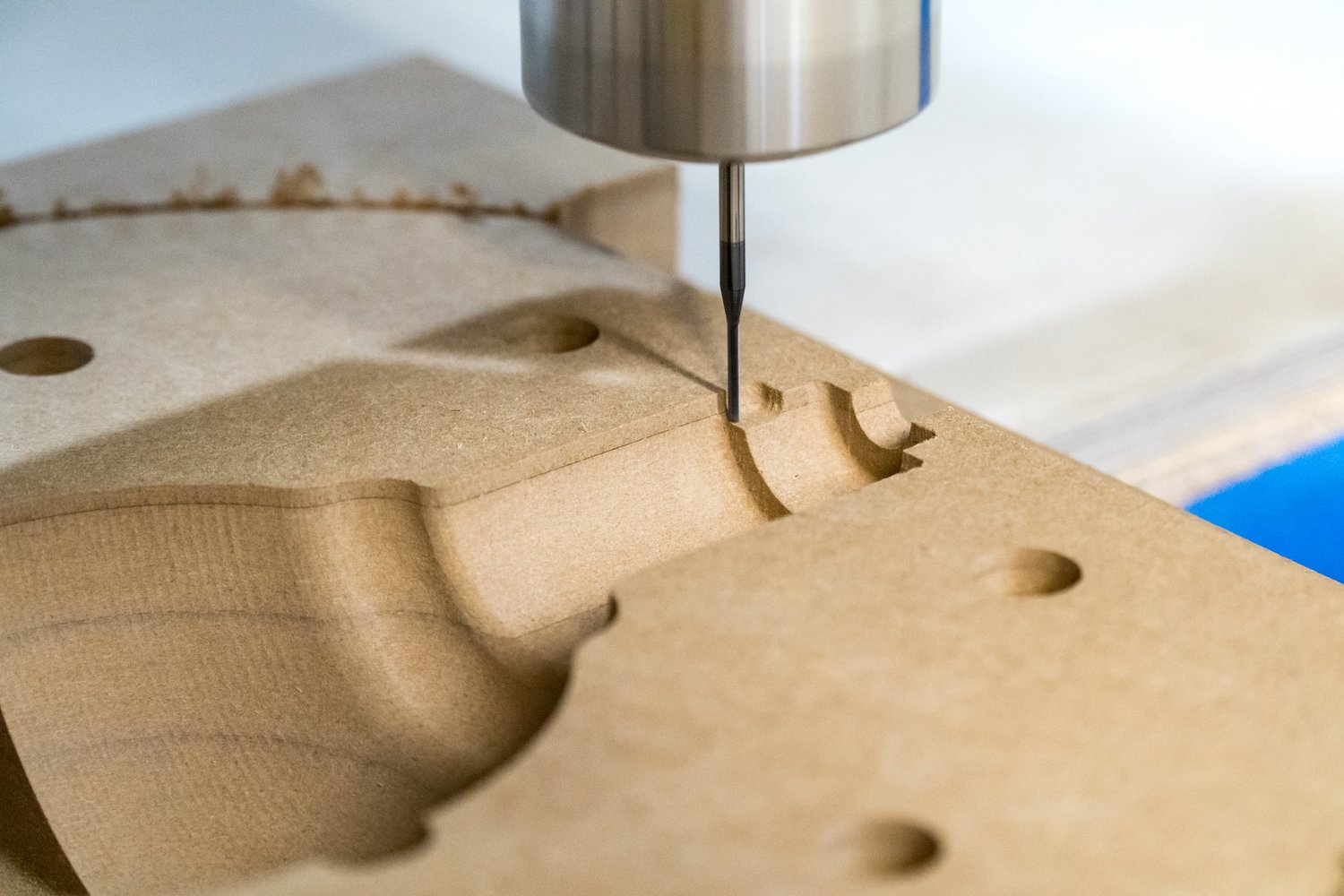 A two-part mold tool from MDF being machined with a 1/16″ flat end mill. Courtesy Portland CNC The Binhai Science Museum was designed to showcase artifacts from Tianjin’s industrial past through large-scale contemporary technology, including spectacular rockets for space research. The project is part of the city’s Binhai Cultural Center and contains facilities for cultural events and exhibitions as well as galleries, offices, and restaurant and retail spaces. The project was made to relate to the rich industrial history of the area, the site of high-volume manufacturing and research. A series of large-scale cones create major rooms throughout the museum. The central cone, lit from above, connects all three levels of the building. The exterior of the museum is covered with aluminum rain screen over a sealed aluminum surface, giving the building a unified presence despite its large size and the disparate elements of the structure. Approximately 3,600 copper-colored panels in two sizes (4×7 ft and 4×11.5 ft) make up the flat portions of the building’s façade. The perforated metal panels also help reduce heat gain. The design team developed 52 different sizes of panels with each row of the cones corresponding to a unique width. Each panel is backed by two aluminum U-channels located between the perforations. Completed in 2017, Brock Commons Tallwood House is an 18-story, LEED Gold certified, 404-bed student residence building located at the University of British Columbia in Vancouver, BC. It was the world’s tallest mass wood tower at the time of its completion. The timber structure and prefabricated facade also went up in only 66 days.

Key to receiving approvals and achieving economic viability was a “keep it simple” design approach that makes the building appear ordinary through encapsulation of the wood structure with gypsum board. The prefabricated facade, arranged in a pattern of vertical striations, features pre-installed windows and cladding consisting of 70% wood fibers. A CLT canopy runs the length of a curtain wall base, which reveals the warm wood finishes of amenity spaces within. Elevator lobbies are clad with the same material as the exterior. Hallway finishes include natural wood doors and a palette of rich umber and ochre accent finishes. Living unit interiors are bright white, spare and simple.

CNC machines cut all the mass-timber components, including the penetrations in the CLT panels and the connection holes in both ends of the columns. A unique identifier was assigned to each mass-timber component for quality-assurance and quality-control tracking and on-site measurement of the structural system assembly heights. 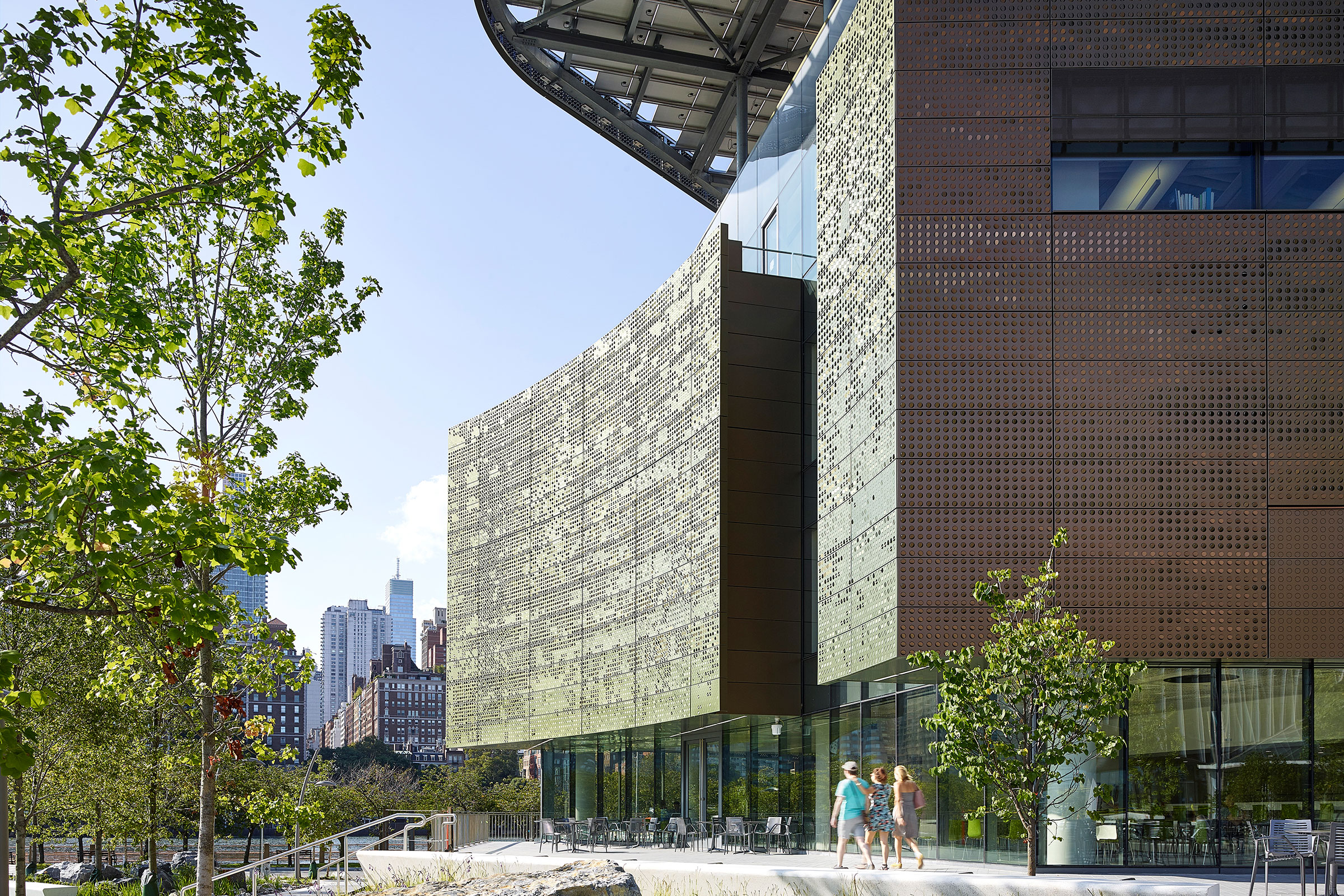 The Emma and Georgina Bloomberg Center is the academic hub of the new Cornell Tech campus on Roosevelt Island. With the goal of becoming a net zero building, The Bloomberg Center forms the heart of the campus, bridging academia and industry while pioneering new standards in environmental sustainability through state-of-the-art design. T

he Bloomberg Center is a four-story building set beneath a photovoltaic canopy, with a low and narrow profile framing stunning views across the island. One of the building’s most distinctive features is its façade, optimized to balance transparency —maximizing daylighting and exterior views, and opacity — while ensuring sufficient insulation and reducing thermal bridging. 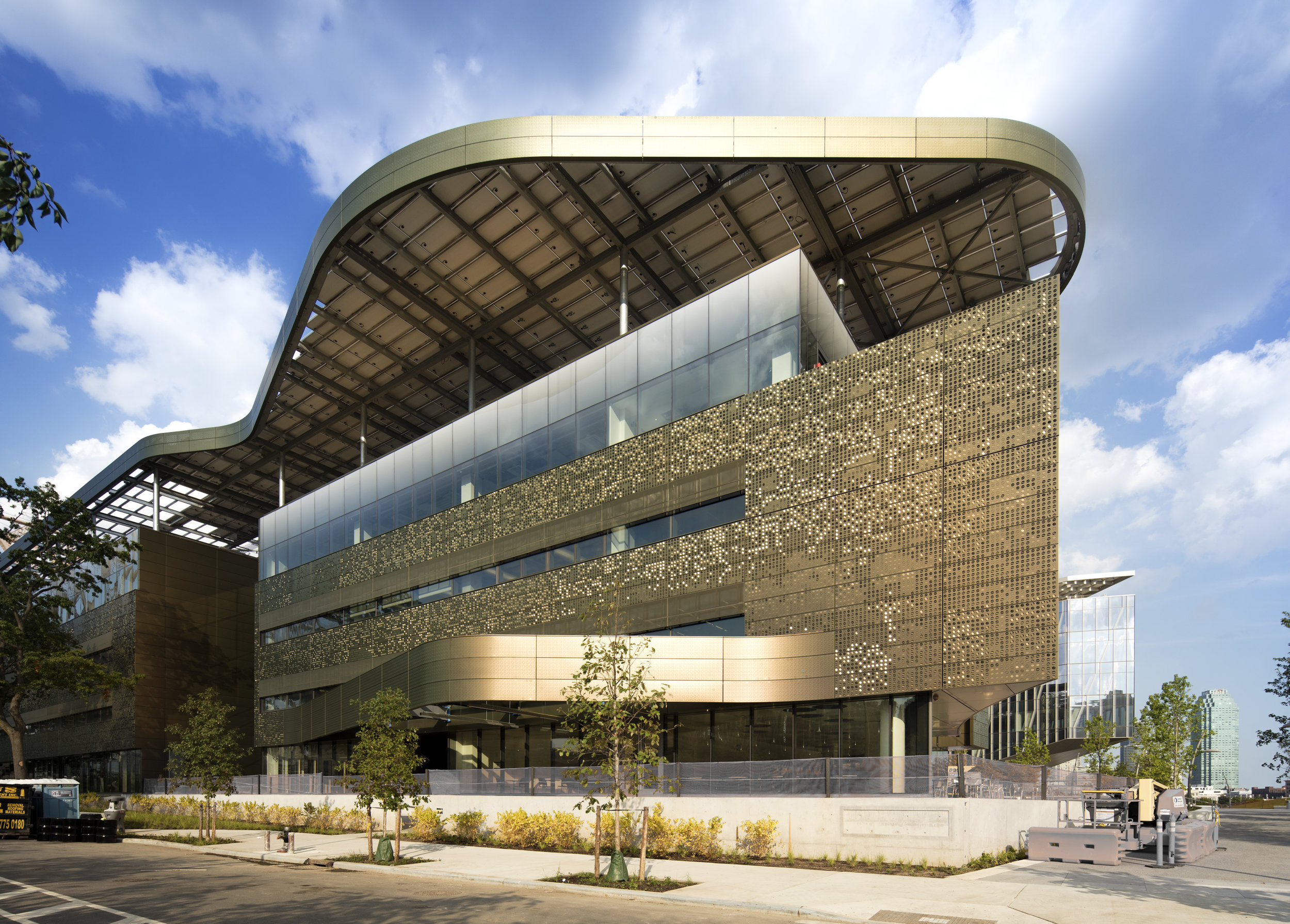 Designed as a rain screen system, the outermost layer of the façade is composed of aluminum panels surfaced in an iridescent, PPG polymer coating. Designed in collaboration with Zahner, an architectural metal fabricator, the façade utilizes Zahner’s Louvered ZIRA™ system to create the image patterning.

Each pixel of the image is translated into the specific turn-and-tilt of a two-inch circular tab punched into the aluminum paneling; the depth and rotation of each tab determines the amount of light reflected. This pixel map was fed into a repurposed welding robot, which processed the digital information into the mechanical turning-and-tilting of the façade’s 337,500 tabs. Perched on an island’s edge in Georgian Bay, Ontario, the Grotto Sauna is a feat of old-world craftsmanship and new world sustainability made possible by cutting-edge software and fabrication technology. The selected concept for the Grotto prescribed a solid, simple presence on the exterior, while the interior followed dynamic air movements in curvature forms; requiring design solutions.

As a result, the team proceeded to experiment further with the materials, and selected wood as the primary medium. Importantly, the Grotto established a successful methodology for addressing the challenges of building ambitious architecture in remote and environmentally sensitive regions. Partisans collaborated directly with their fabrication partner, MCM Inc., to develop new prototyping methods and with engineers and develop novel software patches for the toolpaths. The latter enabled the fabricators to override the automated limitations of the CNC machinery and ultimately use it as a sculpting tool to achieve the aesthetic vision, all the while maximizing the available wood and milling along the grain so that the pieces would match one another. The successful production of the panels also had to anticipate the method by which they would be sequentially assembled. This required the team to develop a sophisticated installation plan in tandem with the fabrication process. When Bjarke Ingels Group and JDS Architects set out to create The Mountain residential project, it was the 2nd generation of the VM Houses: same client, same size and same street. The program, however, is 2/3 parking and 1/3 living. What if the parking area became the base upon which to place terraced housing, like a concrete hillside covered by a thin layer of housing cascading from the 11th floor to the street edge? Rather than doing two separate buildings next to each other — a parking and a housing block — the team decided to merge the two functions into a symbiotic relationship.

The parking ﬂoors are covered with a continuous perforated aluminum surface, folding into four parts from the southern to the eastern facades. This controls sunlight and air circulation. The folded surface makes reference to the name of the project, displaying a realistic image of Mount Everest.

For its aluminum panel facade, each perforation plays a speciﬁc part in the composition of the image. In some parts, perforations are so large and dense that there is almost no visual restriction between inside and outside. During the day, the perforation in the aluminum plates appears black on the bright aluminum, and the mountain image resembles a roughly rasterized photo. At night time, the facade is lit from the inside and appears as a photo negative in different colors as each floor in the parking area has different colors. 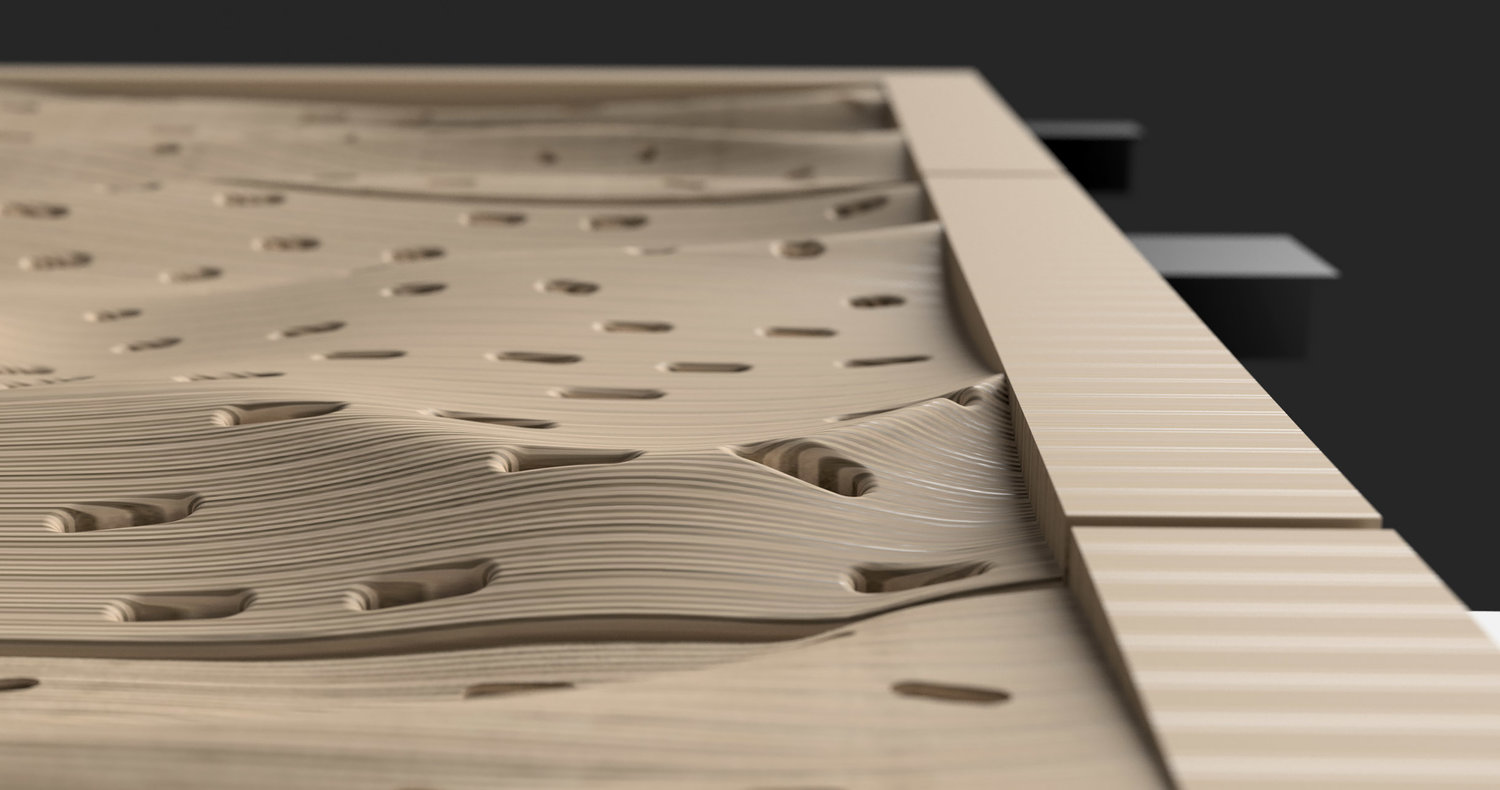 Today, subtractive manufacturing is being radically reimagined. We are seeing projects where 4D self-transforming materials respond to changes in heat, sound, or moisture levels to change shape. Subtractive manufacturing also offers a variety of material and processing methods for diverse design applications. As the process of building evolves, the convergence of technologies opens new possibilities for architecture, design and machining.

Browse the Architizer Jobs Board and apply for architecture and design positions at some of the world’s best firms. Click here to sign up for our Jobs Newsletter.

The post Subtractive Manufacturing: The Quiet Machine Revolution that is Reshaping Architecture appeared first on Journal.

Temporal Design: An Introduction to the 4 Most Popular Animation Software for Architects