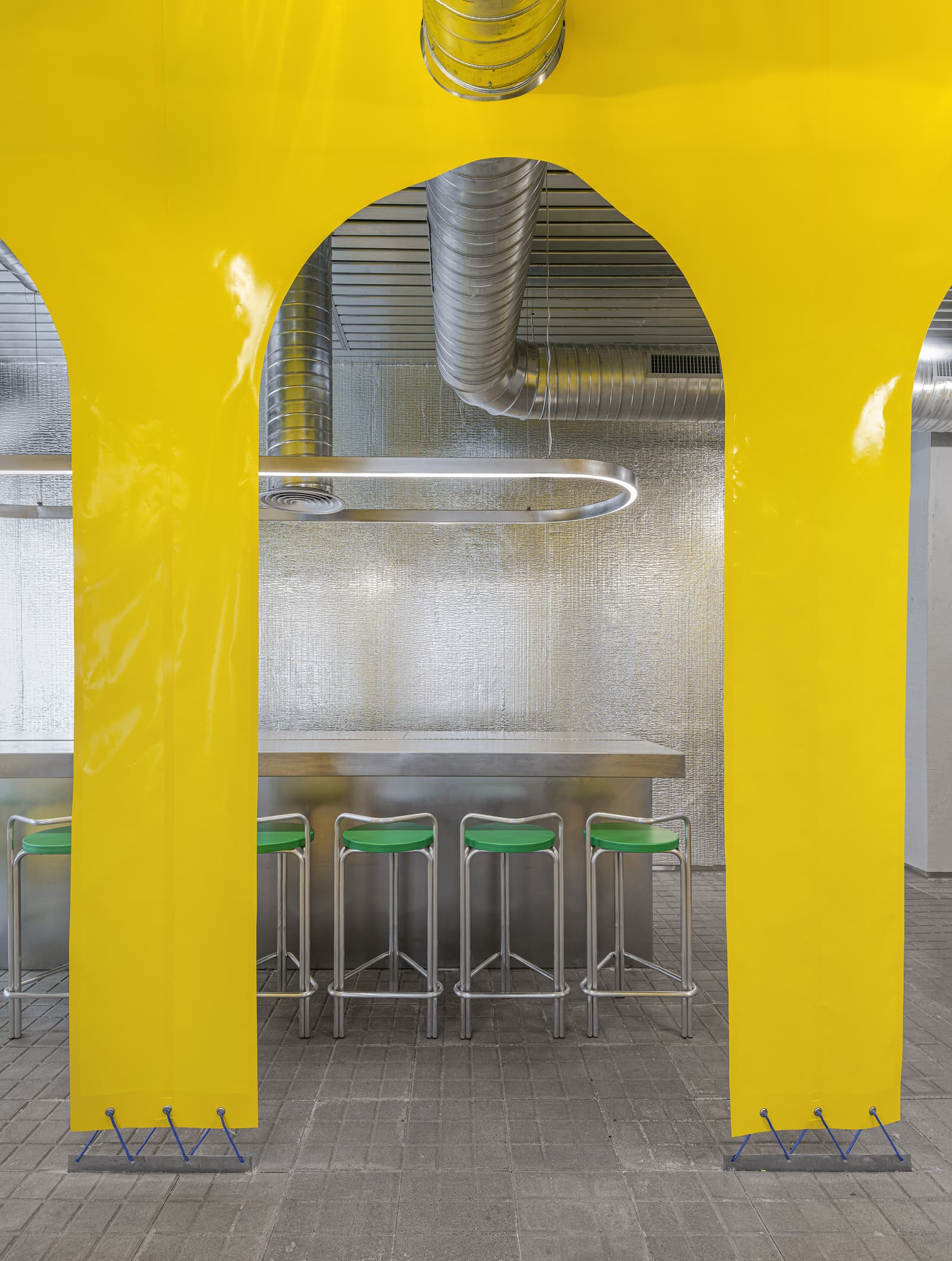 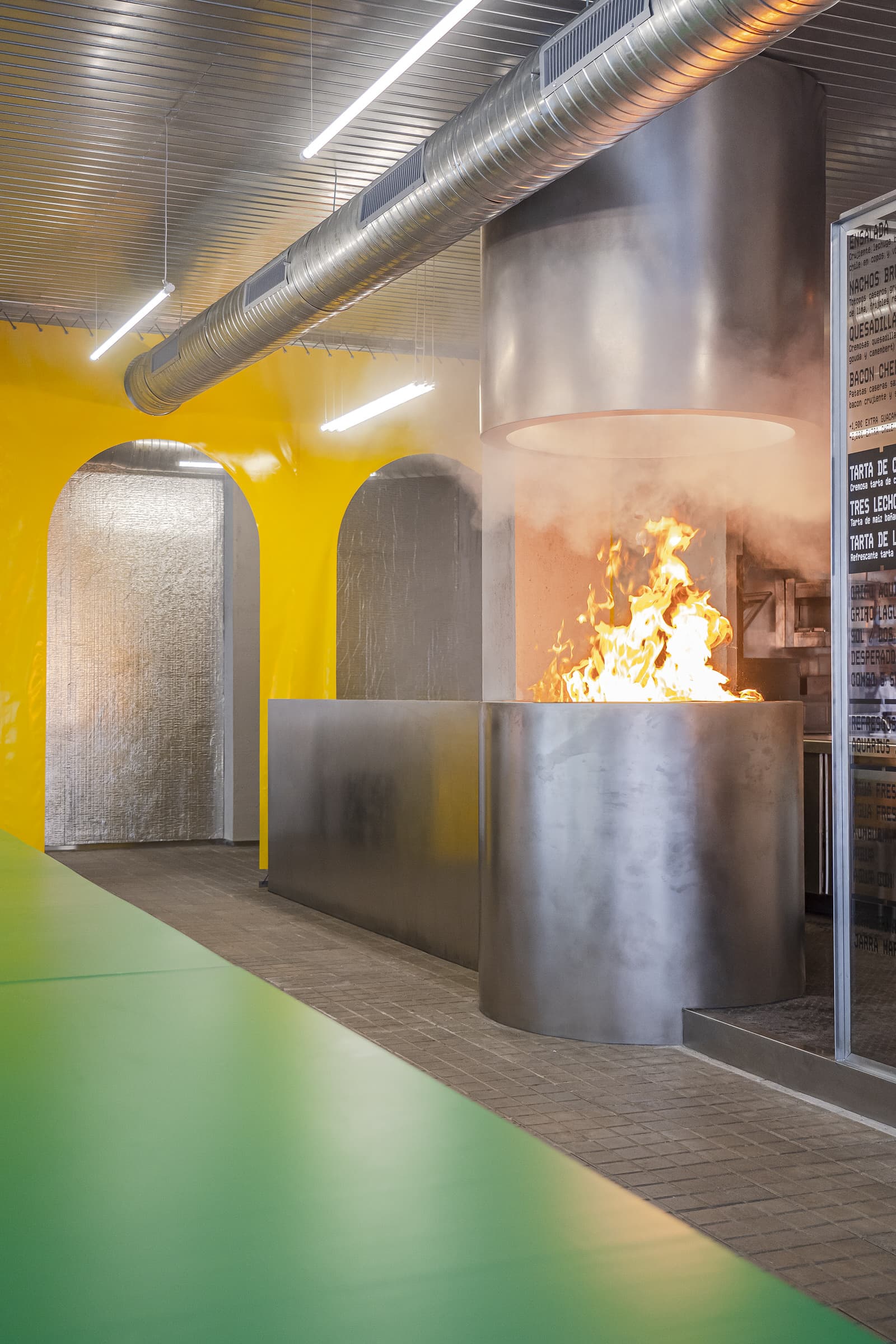 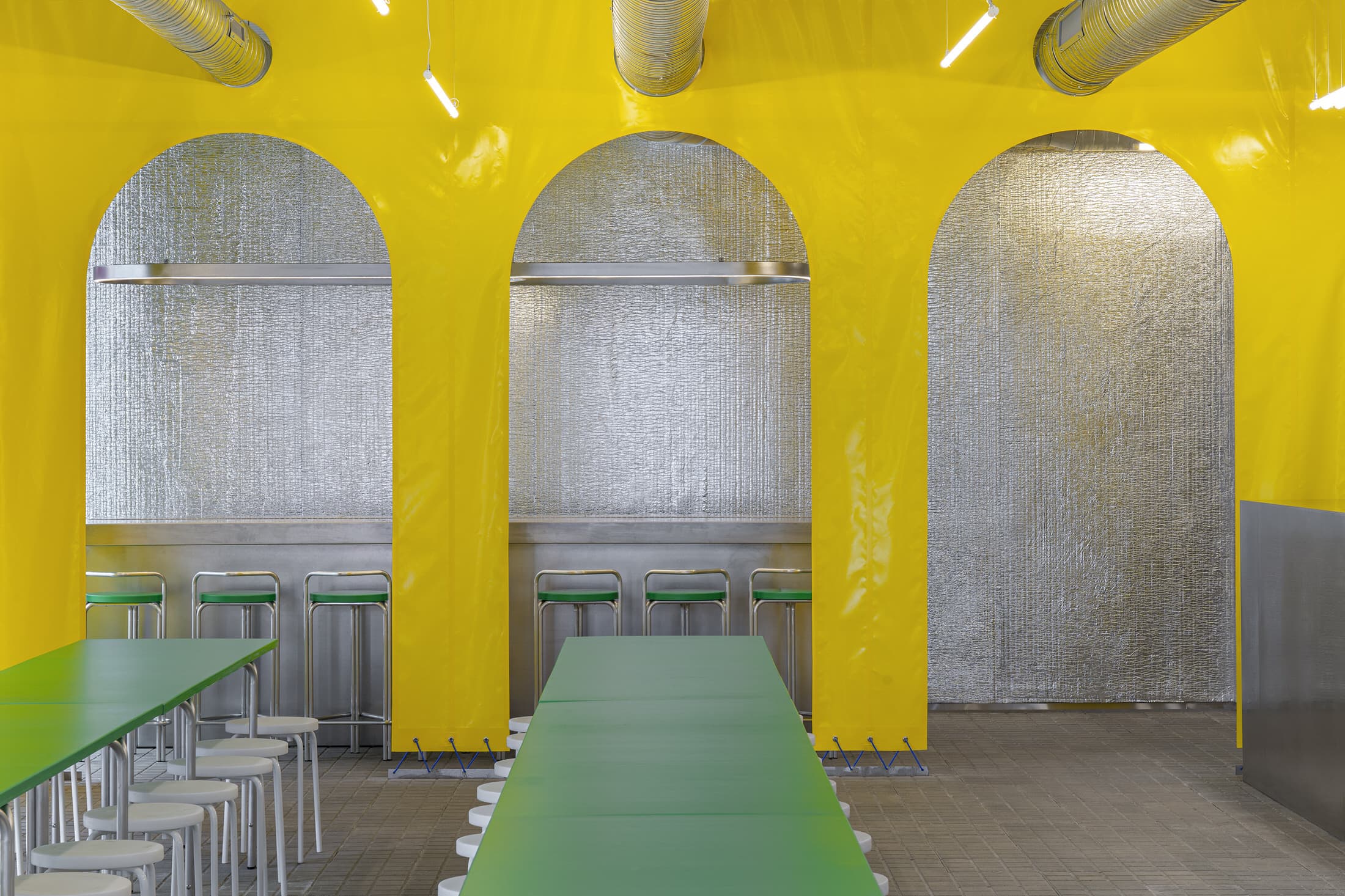 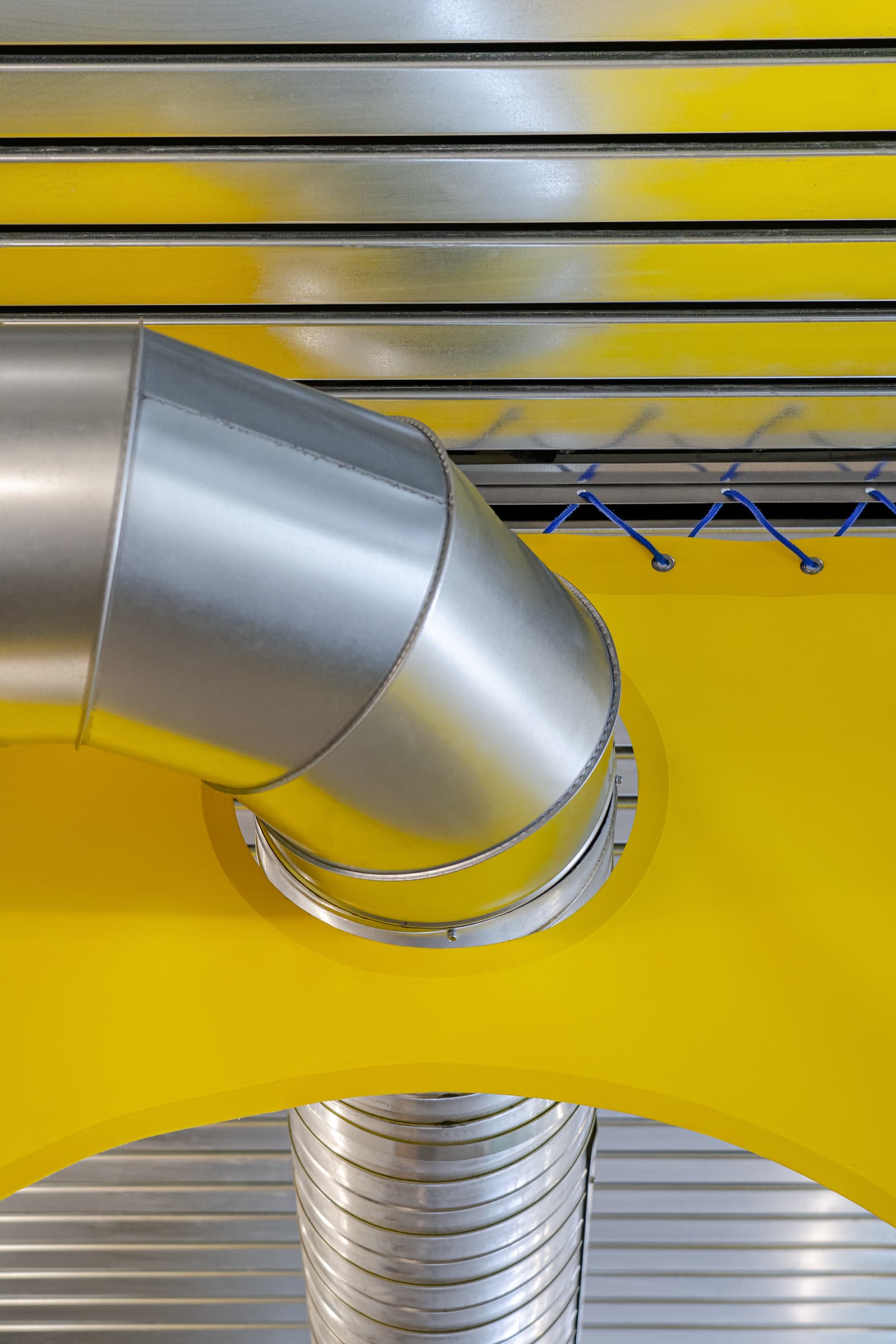 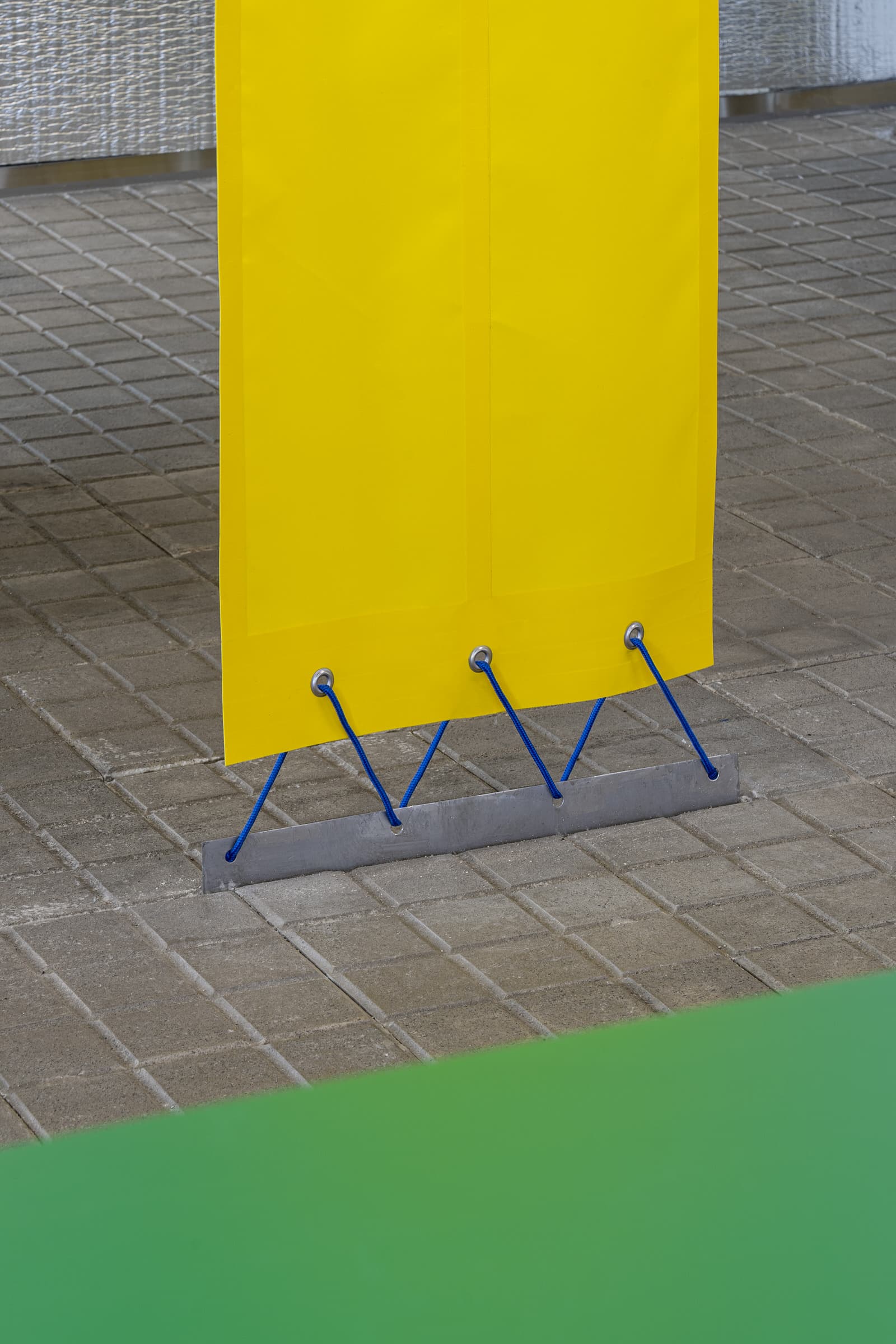 For Brutal Burrito in Madrid, Burr Studio looked to street vendors and market stands for inspiration, emulating the temporary and sporadic space these classic eateries live in — referencing both their physical shape as well as their ambition to change and evolve.

The project treats the interior as a body to be clothed, therefore establishing a distinction between naked and dressed parts. The pre-existing space remains ‘undressed’, assuming a raw aesthetic based on rough plastered surfaces and floors that reflect the materiality of the surrounding sidewalks. The ‘dressed’ element plays out as a textile system that distributes the dining areas. A stretched fabric is used to separate zones, based on techniques used in street markets.

To create a contrast with this street-like reference, the project leans on rather classical influences using arcades to delimit the interior spaces. This kind of structure resembles inflatable castles for children; a kind of plastic-made tradition. This dismountable, almost disposable condition gives the interior a certain spontaneity; the feeling of being a place that does not really belong there. In line with this idea, the facade display consists of intentionally mismatched elements, making the arcades appear unrelated to the large street windows, so that it is understood as a series of layers that don’t fit each other. 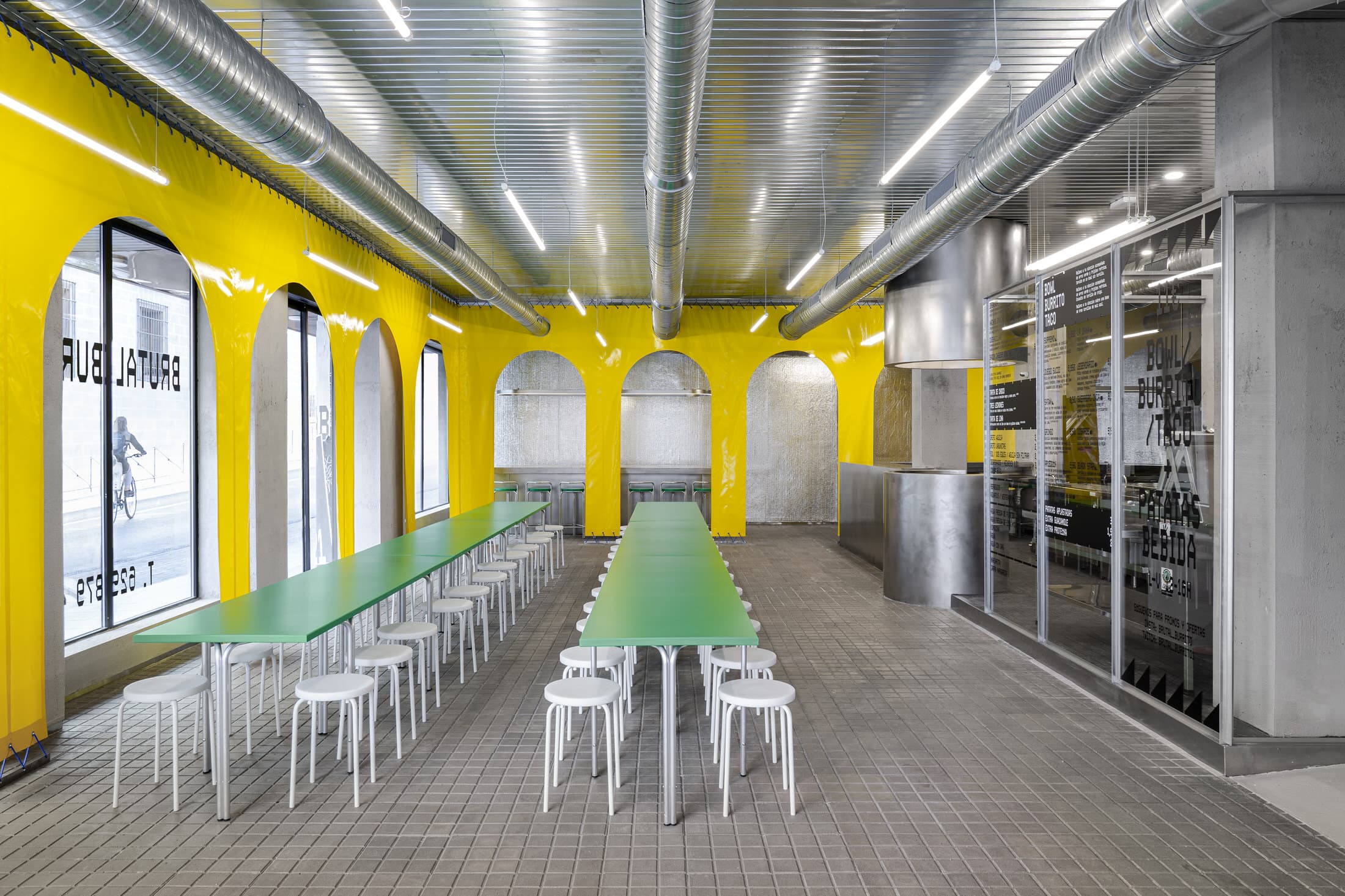 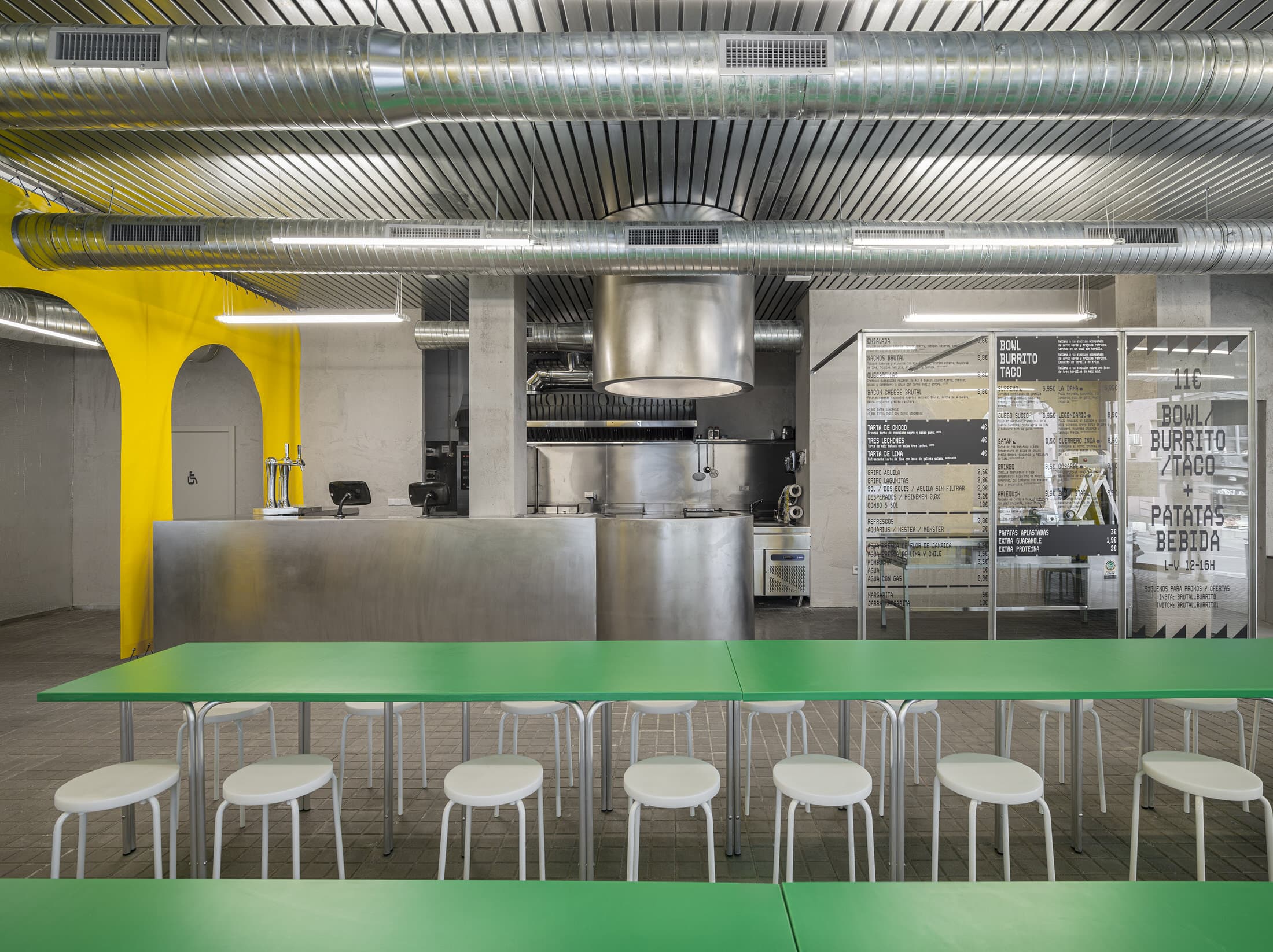 The kitchen elements, on the other hand, take a fixed position. They adopt a functional, technical aesthetic, using stainless steel as a sanitary surface on which to prepare or serve food. The ceiling extends out of the kitchen, invading the rest of the space with metallic reflections, blurring the difference between the two sides of the bar counter.

Among all the kitchen elements, two stand out above all others. The first one is the comal, an adaptation of the traditional pre-Columbian cookware mainly used in Mexico. It takes a central position, both physically and symbolically, representing all cooking operations developed by Brutal Burrito. It is a shiny stainless steel cylinder, split in two halves, a griddle and an exhaust hood, only connected by smoke and flames. The second element is the tortilladora, an appliance specifically developed to produce tortillas, rarely found outside of Latin America. The visitor encounters the tortilladora in action, producing the tortillas that will later be eaten, enclosed in a protective glass case. 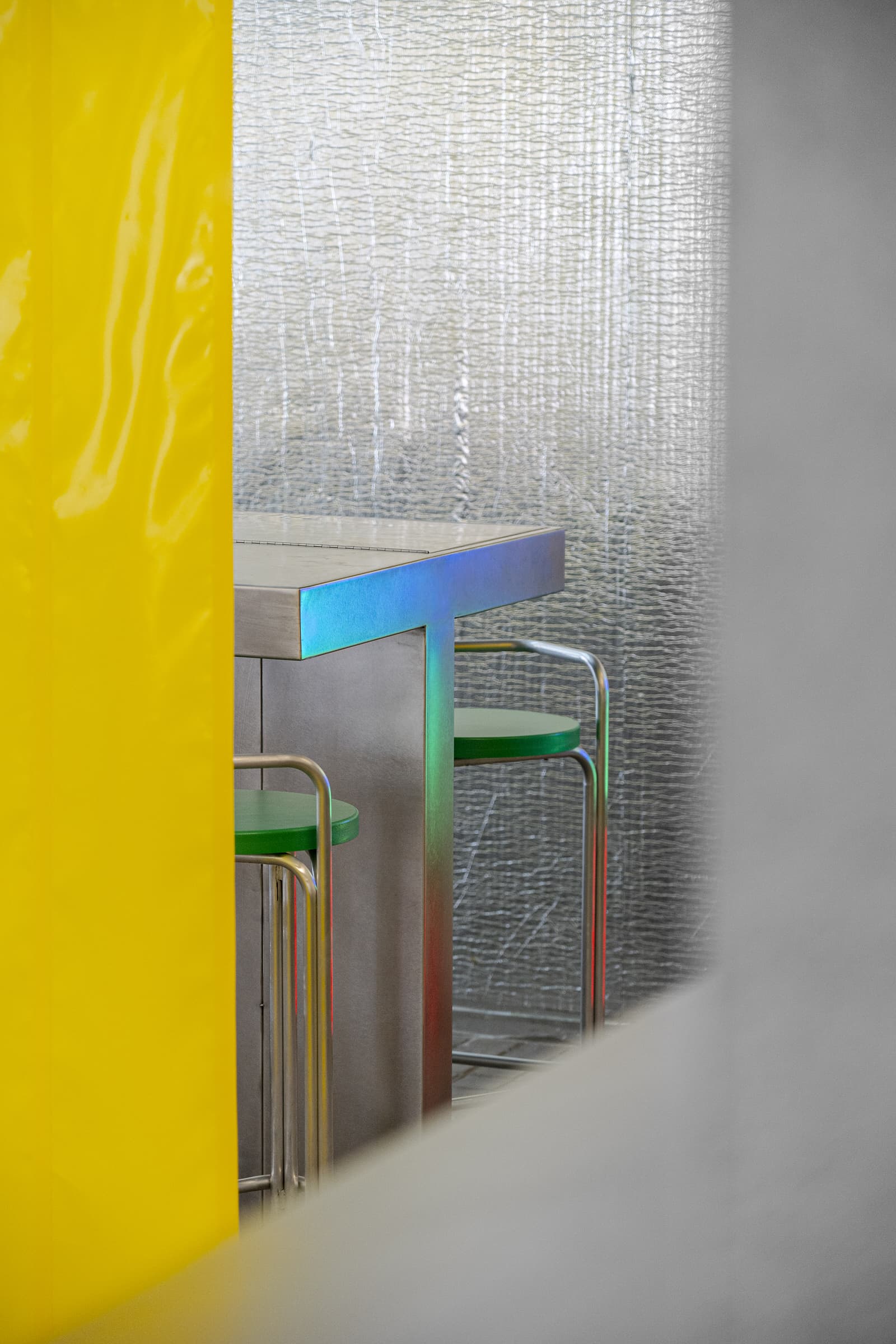 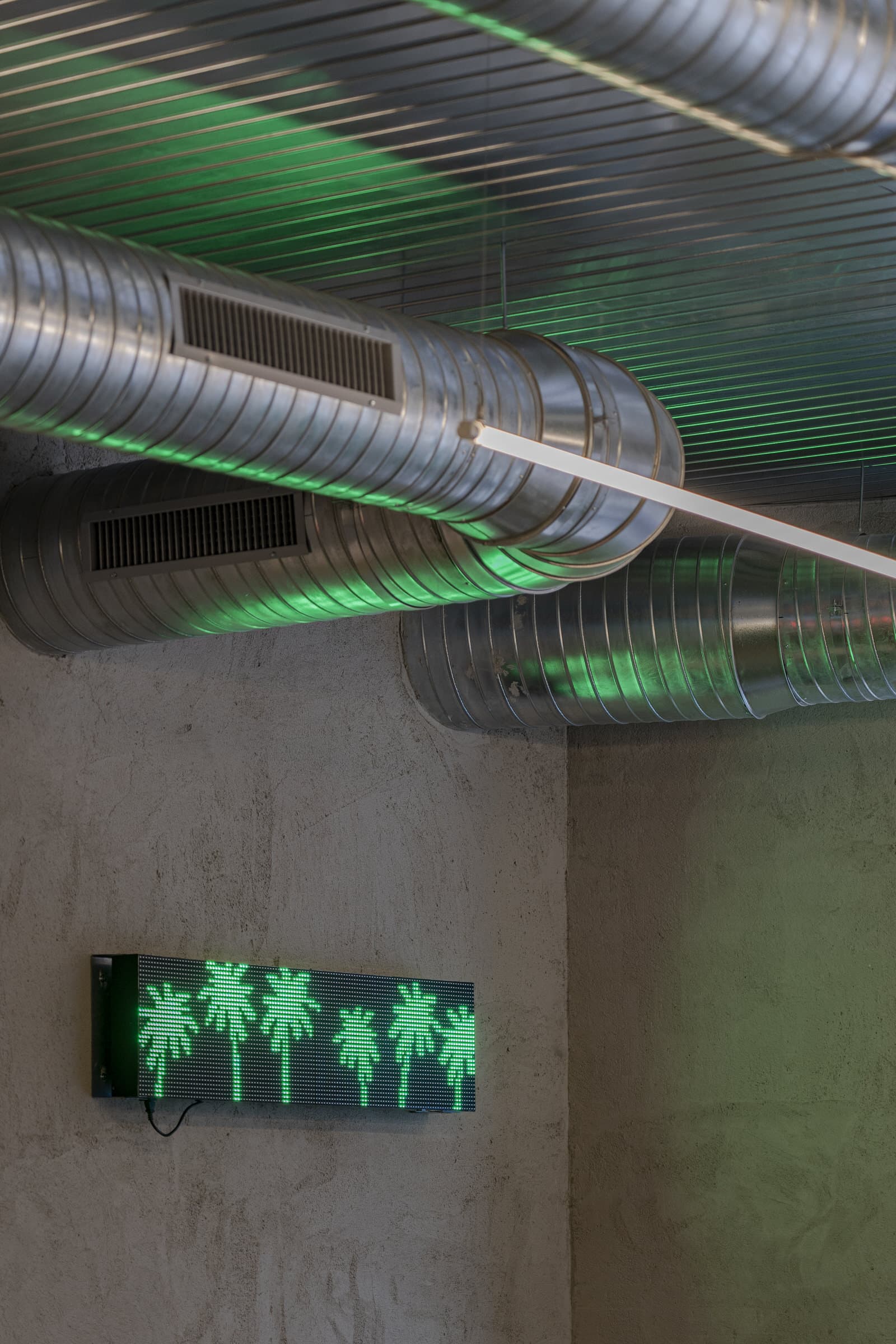 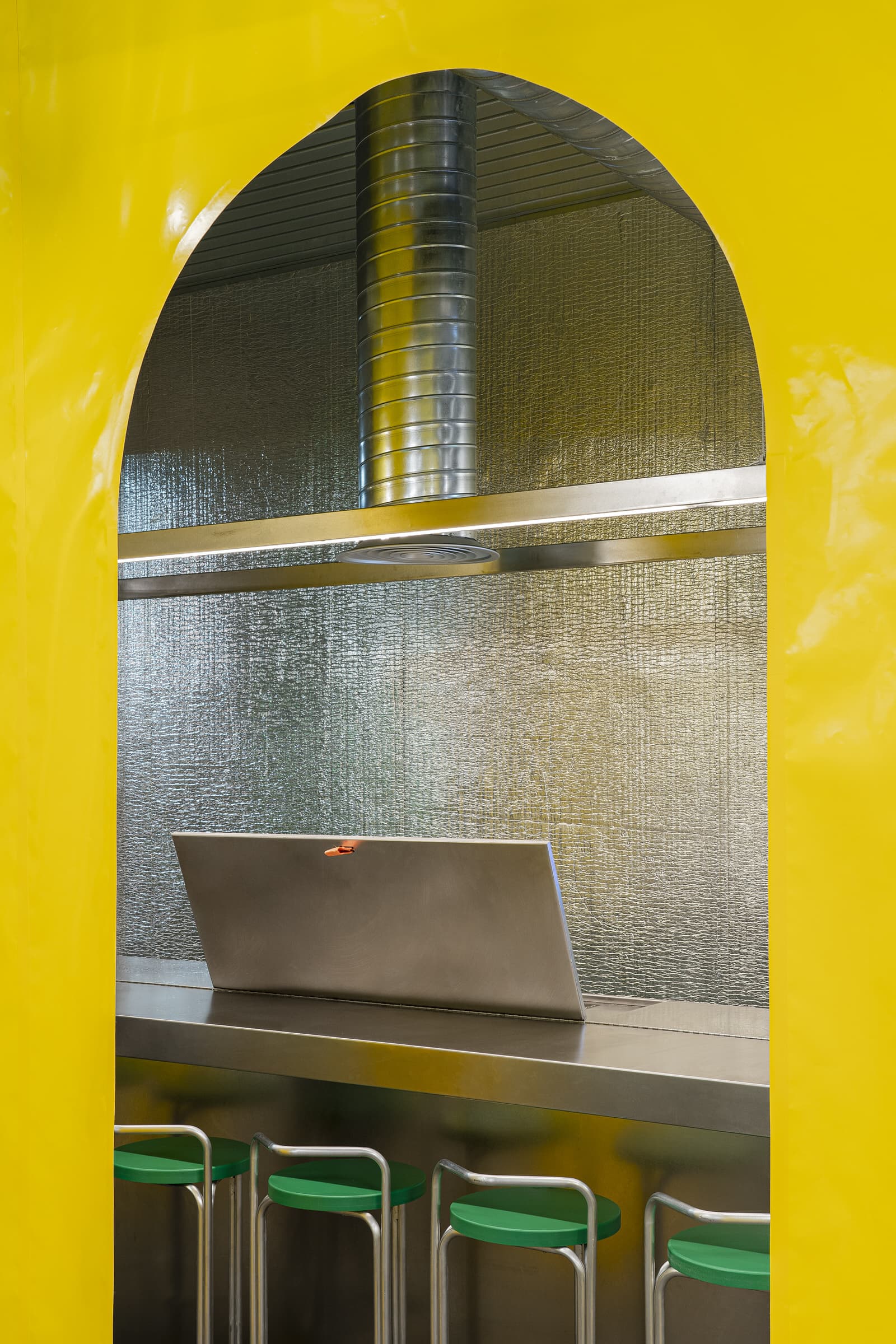 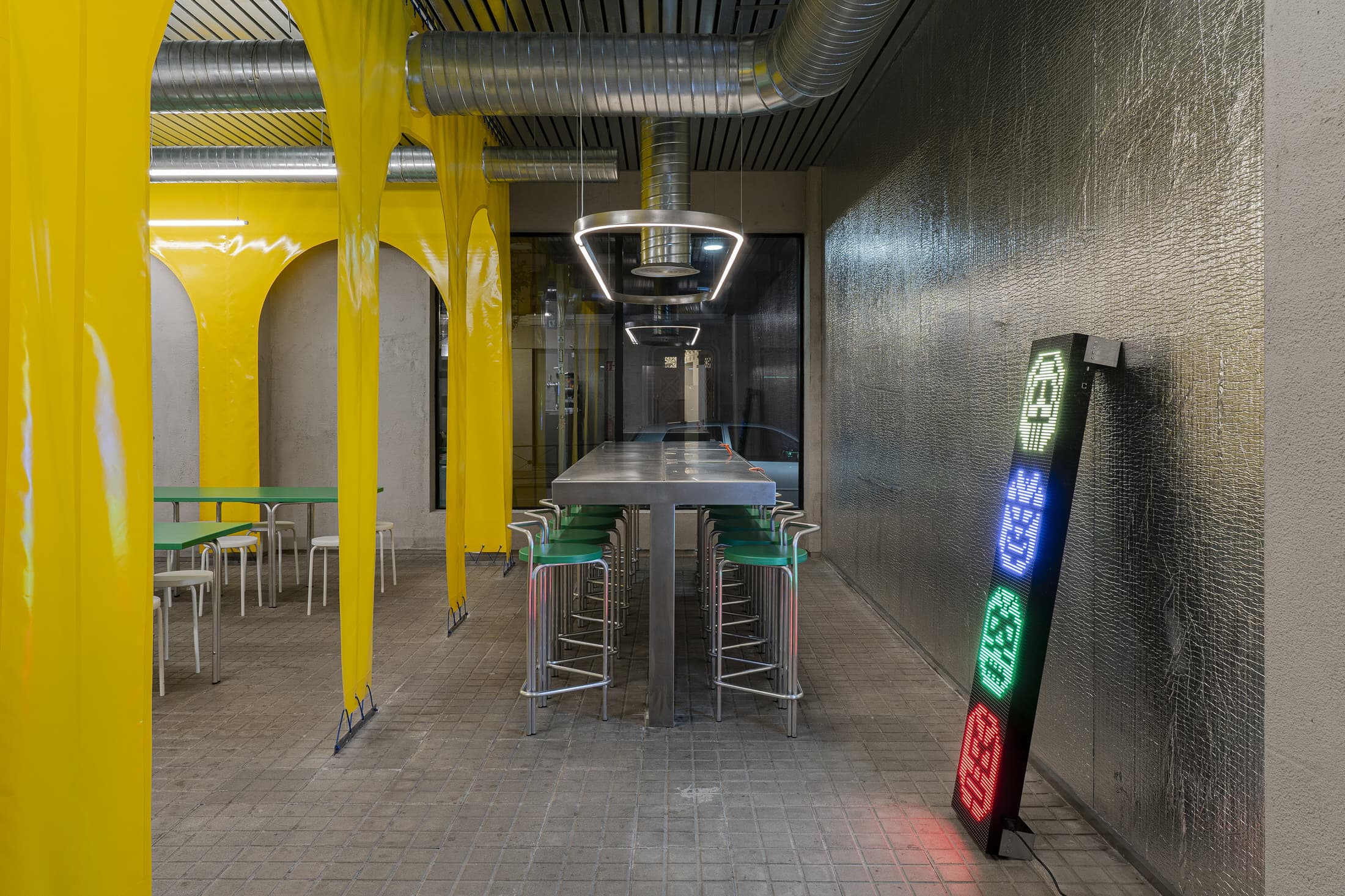 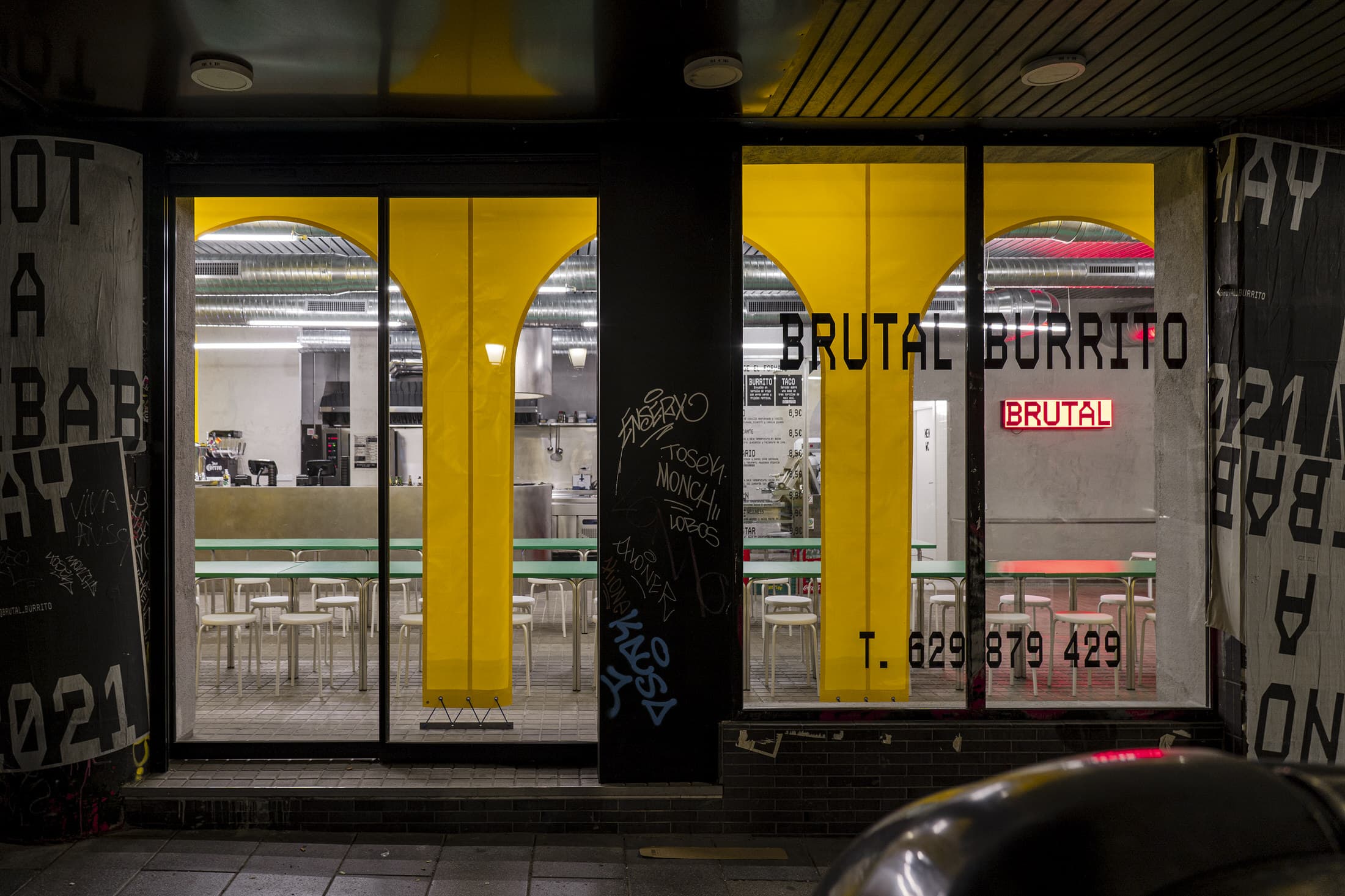 The furniture designed for Brutal Burrito is based on the aluminium tube bending technique, essentially used for the production of outdoor furniture for small bars and restaurants in Spain. For the tabletops and seats, the designers chose a high-density cutting board, commonly used in the kitchen for chopping and slicing food. The repetition of these elements resulted in two large shared-use tables.

Named after the rough edges, imperfections and remnants that appear in a process of alteration, Burr is a Madrid-based experimental architecture practice that looks at design asymmetrically, led by Elena Fuertes, Ramón Martínez, Álvaro Molins and Jorge Sobejano.