In Headington, on the outskirts of Oxford, a 25-ft fibreglass shark by Bill Heine crashes through the roof of a suburban terrace – a 35-year-long protest against censorship, state warfare and planning restrictions.

The artwork has long been a local landmark, but the council’s new heritage site designation, celebrating the sculpture’s ‘special contribution to the community is simultaneously lampooning its anti-establishment message – and drawing criticism from the artist’s family.

‘Using the planning apparatus to preserve a historical symbol of planning law defiance is absurd on the face of it,’ the artist’s son Magnus Hanson-Heine told AP. ‘It undermines the message of the sculpture, and in that sense, it damages the artwork that a listing decision is supposedly seeking to preserve.’ 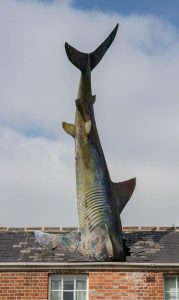 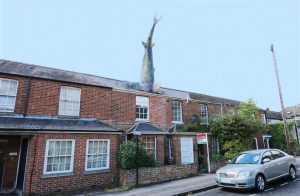 The Headington Shark was conceived in 1986 with Heine’s friend, sculptor John Buckley, as a way to ‘liven up’ Heine’s property. Sitting outside the home he’d just purchased, the pair observed US warplanes overhead on their way to bomb Tripoli – retaliation for Libyan sponsorship of terrorist attacks on US troops.

Speaking at the time, Heine explained: ‘The shark was to express someone feeling totally impotent and ripping a hole in their roof out of a sense of impotence and anger and desperation. It is saying something about CND, nuclear power, Chernobyl and Nagasaki.’

Heine and Buckley built the sculpture in his studio with the help of students and anti-war protesters, keeping its intended location secret until the last moment it was winched onto the back of a tractor. They installed it on site on 9 August – the 41st anniversary of the US’s atomic bombing of Nagasaki.

Oxford City Council immediately opposed the installation, saying it was dangerous to the public, but engineers and inspectors pronounced the fibreglass artwork structurally safe. In 1992, it was granted retrospective planning permission – a ruling that has gained legendary status among town planners for its defence of art.

Having spent years trying (and failing) to remove the sculpture, Oxford City Council’s sudden affection for the work now seems at odds with their previous motives. But with its anti-nuclear, anti-war sentiment, The Headington Shark has renewed relevance amid the ongoing invasion of Ukraine.

Read next: The Shark House in Oxford is available to rent

Inside the Oxford Botanic Glasshouses – ancient botany in the historic city

The post Oxford’s eccentric Shark House is now a heritage site (despite its owner’s objections) appeared first on The Spaces.

SoHo’s ‘most striking’ townhouse is for sale in NYC