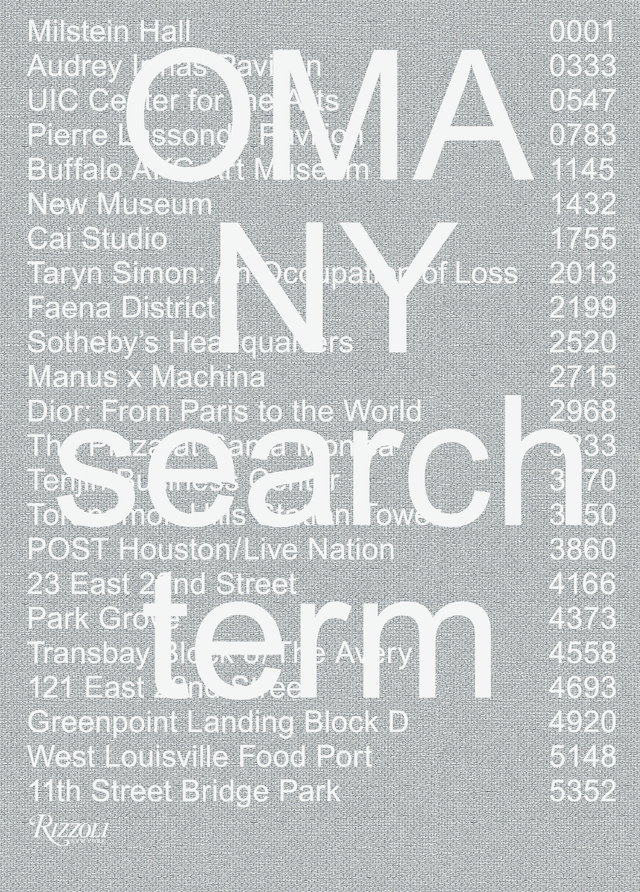 Well into its fourth decade, the Office for Metropolitan Architecture (OMA), founded by Rem Koolhaas in 1975, remains one of the most influential and successful practices of its kind. OMA describes itself as “a firm operating within the traditional boundaries of architecture and urbanism that applies architectural thinking to domains beyond.” OMA New York, has grown from an American outpost to a full-fledged operation with its own attitudes, contributing to the evolution of the globally acclaimed office. Through a diversity of projects, the firm has transformed our understanding of the city and our evolving relationship with art, fashion, food, sustainability, and other quintessentially twenty-first-century preoccupations.
The works presented here elaborate on OMA’s philosophy even as they expand its portfolio geographically. Featured projects (led by partners Shohei Shigematsu and Jason Long) include residential skyscrapers in New York, Miami, and San Francisco, mixed-use developments in cities from Tokyo to Houston, and projects like 11th Street Bridge Park in the public realm, alongside more intimate spaces such as the studio for renowned Chinese artist Cai Guo-Qiang. Permanent structures, such as Milstein Hall at Cornell University, the new galleries of Quebec’s Musée National des Beaux-Arts, a cultural forum and neighborhood for Faena in Miami, and the expansion of museums such as the Albright-Knox Art Gallery in Buffalo and the New Museum in Manhattan, contrast vividly with temporary interventions such as the Manus x Machina exhibition at the Met Costume Institute and the sculptural installation of soaring concrete columns for An Occupation of Loss.
In between projects are dialogues with leading policy makers, museum directors, artists, fashion designers, musicians, chefs, and curators—Christopher Hawthorne, Lisa Phillips and Massimiliano Gioni, Taryn Simon, Iris van Herpen, Virgil Abloh, David Byrne, Alice Waters, and Cecilia Alemani—who provide insight onto areas of the firm’s interests and preoccupations beyond the realm of architecture.
Shohei Shigematsu and Jason Long are partners at OMA, based out of the New York office.
REFERRAL LINKS:

The first monograph to come out of the Office for Metropolitan Architecture (OMA) since Content, the 2004 sequel to the iconic 1997 tome S,M,L,XL, is devoted to OMA New York, the branch of OMA run by Shohei Shigematsu and Jason Long. Those eager for contributions and/or projects by Rem Koolhaas will be disappointed though, given that the OMA founder was not involved in the making of Search Term and only two of the nearly two dozen projects list Koolhaas as a partner: Milstein Hall at Cornell University and 23 East 22nd Street in New York City. Best I can tell, the latter project, which I called an “exciting diagram” when it was unveiled in 2008, is the only project in the new book that for certain will never happen — it “fell victim to the Lehman Brothers bankruptcy and financial collapse” in 2009. The 22 other projects in Search Term are a mix of built, temporary, under construction, and in-progress projects that are each documented with hundreds of images: an average of 241 images per project, in fact.
Shigematsu and Long presented the book a couple of weeks ago at Rizzoli Bookstore, where a large printout of every page from the book served as a backdrop for selfies and photos with the monograph’s authors/architects. Even an unfocused glance at the backdrop revealed the ebb and flow of the book: each project starts with full-bleed images astride two pages of text, is followed by many pages of thumbnail images, and then ends with two pages of plans and other drawings. Those projects are inserted into eight typological sections, from Institution and Museum to Residential and Public Realm. Between each are interviews that the two OMA New York partners held with big names in art, fashion, and other realms, including Iris van Herpen, Virgil, Abloh, David Byrne, and others. The monograph ends with an alphabetical list of Search Terms: a visual index of common tactics (big model, cantilever, pixel, etc.) and other means of categorizing the work of OMA New York, all keyed to the numbered images rather than the project names or pages.
Speaking of pages, although the publisher’s website indicates that Search Term is 676 pages long, I can only trust that is correct, since the pages are not numbered. In lieu of pagination, the projects are found via the image numbers, something that is expressed as early as the cover, whose metallic linen surface is protected by a thick plastic sleeve. These images — the small ones between the full-bleed images at the start of each project and the drawings that finish them off — are what makes this monograph on OMA New York so unique and what lends the book its title. The many pages with thumbnail images and captions clearly resembles a Google Image search or a Pinterest board. At one point in the evening at Rizzoli, someone on the audience asked if a digital format would have been better than a book. Although the two partners answered that the impetus for the book was to serve as a tool for clients and potential clients (previously they handed out S,M,L,XL or Content, clarifying that they didn’t do any projects in them), I could easily see the backdrop of the entire book as akin to an interactive screen that would allow people to pan and zoom into the images to learn about the projects.
In print, the thumbnail images are sometimes so small to be illegible, giving extra weight to the captions and encouraging readers to either fill in the blanks in their minds or find the appropriate images online. Many of the images are diagrams that OMA is known for, which are fine at stamp size, but the shrinking down of others in an effort to present more images rather than less is often frustrating; I have not used my pocket magnifying glass to read a book as much as this one. Nevertheless, I really enjoyed the book’s visual storytelling, which invites readers to follow the numbers, reading the captions to each image and piece by piece digest the process of design and realization. Even 23 East 22nd Street, a project I thought I knew very well, includes images of the sales center I somehow missed at the time, as well as the insertion of the tower between the Chrysler and Empire State buildings in Madelon Vriesendorp’s Flagrant Délit from the cover of Koolhaas’s Delirious New York. Although Koolhaas was not able to realize that “luxury residential tower in a culture of congestion,” this book chronicles the successes that followed, some in Manhattan but many of them in less congested parts of North America.
SPREADS (Images courtesy OMA New York; photos by Spec_Ops.NYC): 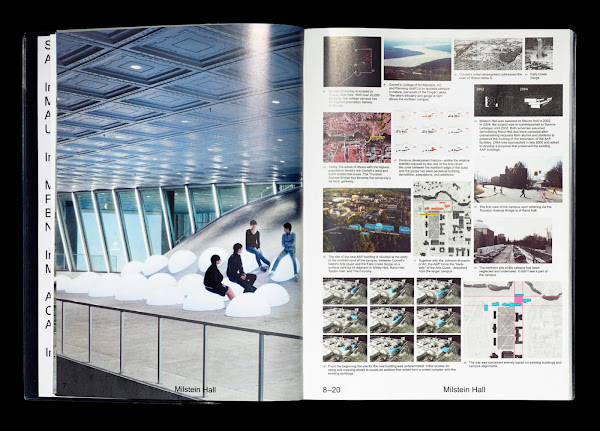 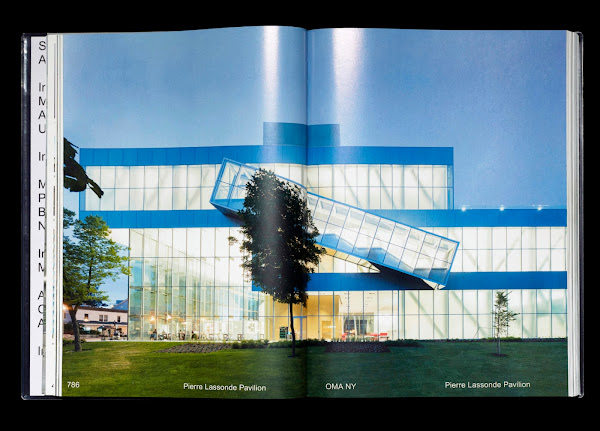 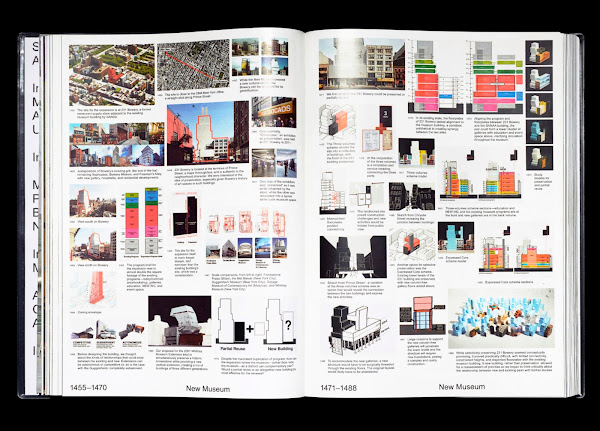 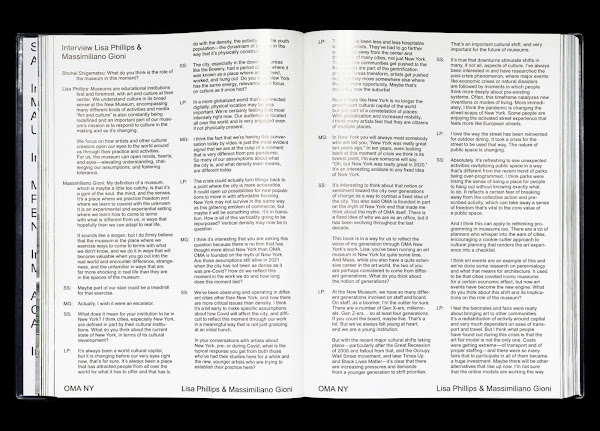 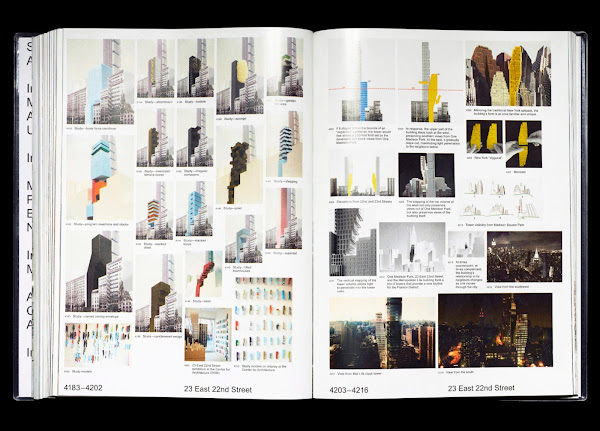 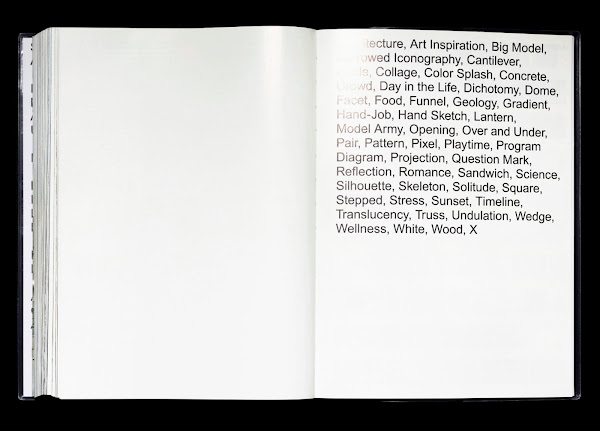 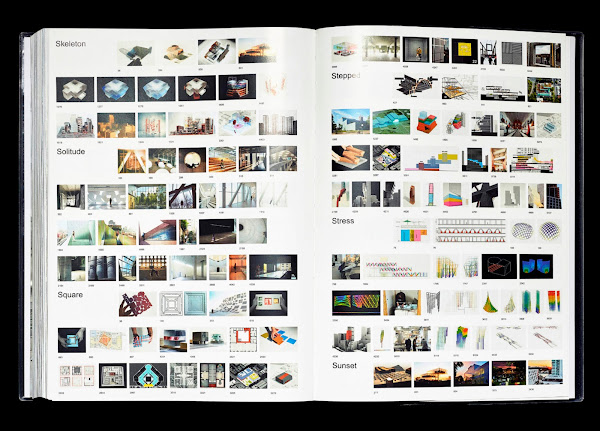