ODDO Architects, which was named emerging architecture studio of the year at Dezeen Awards 2021, designed TH House for a small Hanoi site that is hemmed in on all sides.

Other buildings flank the sides and rear of the plot, while a narrow 1.2-metre-wide alley is all that separates it from the buildings opposite.

Despite the cramped urban conditions, TH House is designed to feel light, airy and connected to nature.

Planting areas are a key element of the architecture, while perforated walls and lightwells help to create a feeling of openness throughout the interior.

“The concept of this narrow five-storey house is to maximise access to daylight and natural ventilation, planting greenery and spatial interconnection, so that members of the family can communicate visually between floors,” said ODDO Architects.

The house has a glazed outer facade that sits slightly forward of the interior spaces, which helps to create a little more distance and privacy from the neighbours.

The 124-square-metre internal layout is kept simple, with one main room per floor and no corridors. Instead, the staircase is the main route between spaces. 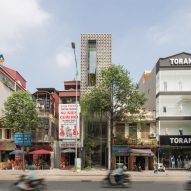 The house widens from the second floor upwards, where it rises up above some of the surrounding buildings to find more space and daylight.

Designed as a social entrance space, the ground floor is the family’s kitchen and dining room. It can be opened or closed to the street with the use of sliding shutters.

Bedrooms are located on the first and third floors, where it was easier to create seclusion. Both have their own en-suite bathrooms.

A break in the staircase makes it possible for a living room to take up the entire second floor, which benefits from natural light thanks to a lightwell at the front of the space.

The uppermost floor contains an altar room, where the family can pay tribute to their ancestors, along with a small utility room and a balcony for surveying the surroundings.

“Traditional family ties are extremely important in Hanoi, and in Vietnam in general, and this aspect is reflected in the design of the house,” said the architects.

“Open living spaces and a glass facade – with the possibility of shielding in order to create privacy – simplify socialisation among the family members as well as with the neighbours.”

Plants are located around TH House’s perimeter, to create the impression of being surrounded by nature.

There are trees on almost every floor, slotted in the stairwell and lightwells so they have room to grow up. Other planting areas include the exterior of the first-floor en-suite, and the gap between the ground-floor WC and the staircase above.

“Greenery within the interiors and outdoor overhanging gardens improve the quality of life in the buildings,” said ODDO Architects.

“The arrangement and type of plants are chosen according to lighting conditions and spatial possibilities. Large planting pots are connected to automatic irrigation, which helps for the maintenance.”

ODDO Architects has offices Hanoi and in the Czech Republic city of Havirov. It is led by three partners: Nguyễn Đức Trung, Mai Lan Chi Obtulovičová and Marek Obtulovič.

Dezeen Awards 2021 judges named the practice emerging architecture studio of the year after being impressed by the way its projects forge connections between people and nature.

“The selection of materials and spaces they make in this early work shows a promise of values that speak to the current challenges faced by society, including how to stretch modest budgets yet achieve excellence in design,” said the master jury.

The studio is developing a specialism for building human-focused buildings in Hanoi’s dense cityscape. Other projects include CH House, a five-storey family residence on a narrow infill plot elsewhere in the city.

“Our intention is the connection between man and a piece of nature within a compact living in a densely built-up area,” added the architects.

The photography is by Hoang Le and ODDO Architects.