Louis Kahn: The Importance of a Drawing

“The importance of a drawing is immense, because it’s the architect’s language.” — Louis Kahn to his masterclass, 1967
Louis I. Kahn (1901–1974) was one of the most significant architects of the twentieth century and his influence is present today in ways both profound and subtle. Unlike previous publications on Kahn, which have focused on his built work and which considered the drawings foremost as illustrations of these, this is the first in-depth study of drawings as primary sources of insight into Kahn’s architecture and creative imagination.
By offering a spectrum of close readings of drawings by Kahn and his associates in a series of incisive and richly illustrated essays, this book is at once an intimate artistic portrait of this important architect and a provocative and timely contribution to the current discourse on representation in architecture. For architects and students of architecture, Kahn’s lasting significance is not only in the buildings he built, but in how he designed them.
Based on unprecedented archival research, engagingly presented by a group of eminent scholars and architects, and lavishly illustrated with over 900 highest quality reproductions, The Importance of a Drawing is destined to become a standard work in the literature on Louis Kahn.
Michael Merrill is an award-winning architect and educator. He has taught architectural design and theory at the Technical Universities at Karlsruhe and Darmstadt and is currently Director of Research at the Institute for Building Typology at the Karlsruhe Institute of Technology in Germany. He is the author of Louis Kahn: Drawing to Find Out and Louis Kahn: On the Thoughtful Making of Spaces.
REFERRAL LINKS:

The word impressive immediately comes to mind when opening Louis Kahn: The Importance of a Drawing. It is a big book, to be sure, at roughly A4 size, nearly two inches thick, and with close to 1,000 images, many of them drawings by Kahn himself. But it is also a book loaded with serious scholarship, most of it by architect/editor Michael Merrill following visits to the Louis I. Kahn Collection in the Architectural Archives of the University of Pennsylvania; it also has contributions by others, including Michael Benedikt, Sue Ann Kahn, David Leatherbarrow, Robert McCarter, and Gina Pollara, among others. Many books on Kahn and his buildings have been published, but surprisingly there hadn’t existed a book that comprehensively examined the drawings produced by Kahn over the course of his career. So this book fills a void and does it in a way that should please any fan of Kahn.
The book starts with a preface on “the importance of (a) drawing” to Kahn, in which Merrill describes the shape of his book and how to use it — he describes it as akin to logbook, with essays and presentations of drawings ordered by theme rather than project — but he also mentions in a footnote that a study of Kahn’s use of architectural models is planned to follow this book; another thing to look forward to. The preface is followed by an essay by Merrill on the joys of visiting the Kahn archive (first spread below): “If you’re an architect or student of architecture and have come here to the Kahn Collection seeking instruction or inspiration, you couldn’t have chosen a better place.” The dozens of essays and other pieces that follow are organized into eight sections, from “To Be in Touch: Beginning to Draw, Drawing to Begin” to “Drawing from Kahn,” which presents the last drawings by Kahn, those done in the days before he died on March 17, 1974.
While the eight sections span approximately 475 pages, the longest chapter is the second, “Active Imagination Animated: The Orthographic Drawing Set.” At nearly 170 pages, and with two essays and eight project presentations, all attributed to Merrill, this part devoted to plans, sections, and elevations is practically a book in and of itself, hitting on important projects (Salk, Kimbell, Exeter, Dhaka) and such unbuilt works as the Hurva Synagogue and the Dominican Motherhouse, the latter being the subject of two previous books (linked in the bio above) by Merrill. This section of the book seems to have more drawings from the archive than the 300 other pages, so it’s hard not to spend the most time here, poring over the sections of the Kimbell Art Museum, for example, to trace the evolution of the shape of the vaults. Most readers won’t actually make a visit to the Kahn Collection, so this section of the book is in many ways the next best thing.
A few of the other sections — especially “Drawing Together,” “Drawing Connections: An Architect Is a Composer,” and “Redrawing Kahn” — comprise the bulk of the external contributions to Merrill’s book. In the last of those three, to take just one example, Gina Pollara delves deeply into Kahn’s memorial to Franklin Delano Roosevelt, which was in design when Kahn died in 1974 and wasn’t completed until 2012, thanks to the efforts of Pollara and others. This essay is focused on one Kahn project, but others, such as Michael Benedikt’s “One, Two, Three, . . . Louis, I., Kahn,” address numerous projects. Thankfully, there is a short “index of illustrations” that enables readers to find drawings of specific Kahn projects scattered about the book. And that is how I see myself using this immensely resourceful book: project by project, depending on my needs at any given time. Lastly, it’s worth noting that interspersed among the hundreds of drawings are quotes by Kahn that were pulled from publications, lectures, conversations, and other sources. They help give voice to the person whose hand is evident on every page of this impressive book.
SPREADS: 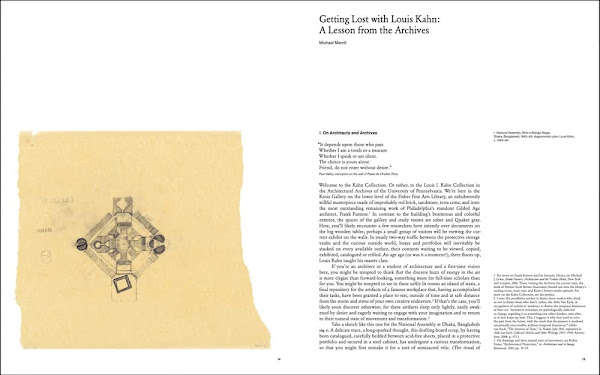 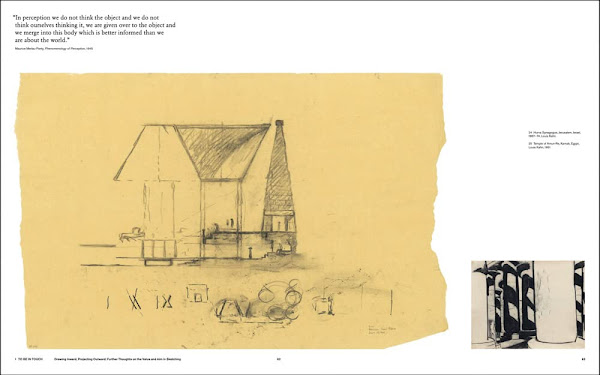 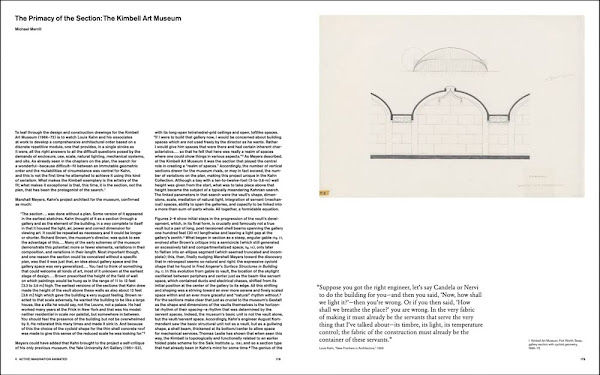 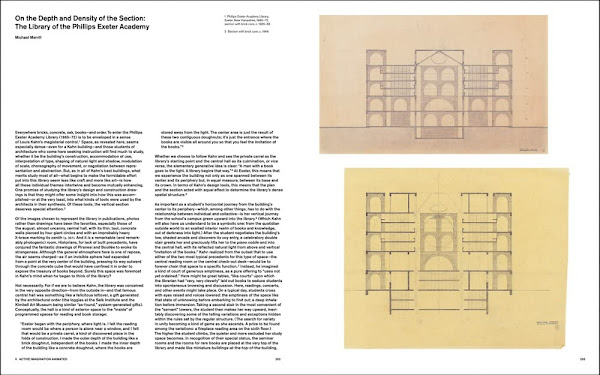 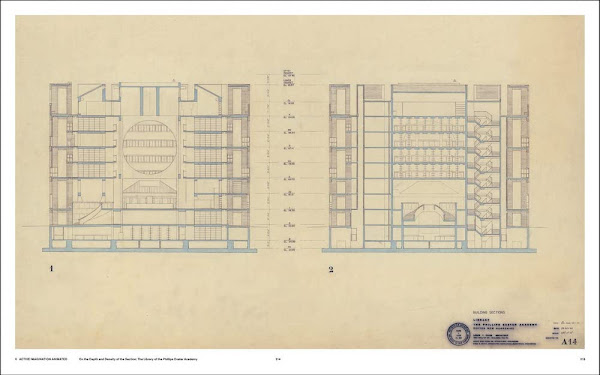