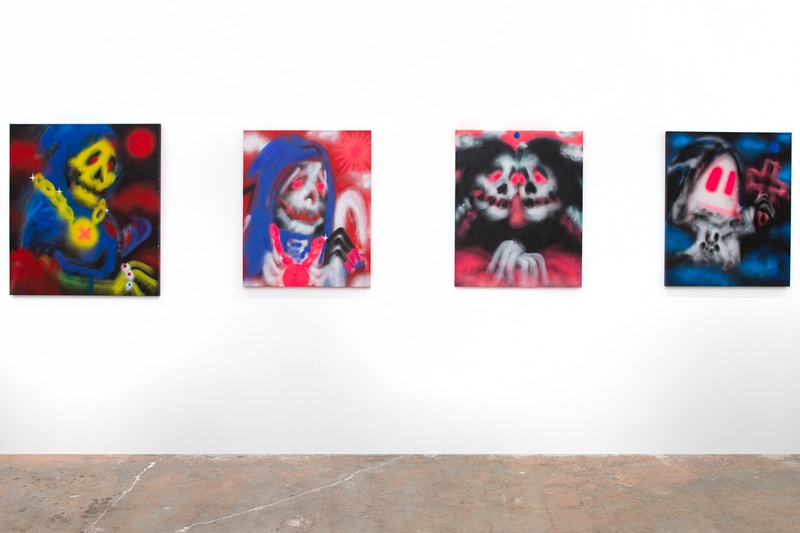 Comprised of a cast of rising figures, the show seeks to explore the relationship between the forms, themes, and techniques of this diverse range of contemporary artists. Although most of the group were born and raised in disparate corners of the world, a general sense of flux and detachment ties in the work on view.

For example, Downing aims to depict subjects that are simultaneously monstrous amalgamations of portraiture and honest, complex renderings of real people. Debate Club, 2022 showcases a set of photo-montaged NBA jerseys with several figures similarly blurred in the scene — perhaps noting of both the grandeur and corruption tied to celebrity and the fandom that surrounds it.

Elsewhere, Christina Allan blends figuration and abstraction to create a world of creatures that appear mythic and deeply psychological. In PINK ICE, 2022, Allan reimagines the “personification of death – The Grim Reaper – through a humanistic lens,” she said in a statement. “A prominent figure in human culture, Reapers have often been depicted as evil spirits that prey on mortals instead of guiders of souls into the next realm,” Allan added.

League OTO’s “All is Not What it Seems” is on view at Lorin Gallery until May 7.

On the topic of exhibitions, HypeArt visited the latest iteration of Virgil Abloh’s seminal show “Coming of Age” at Fondation Louis Vuitton.

BDP to shed staff after pause of Westminster restoration plans