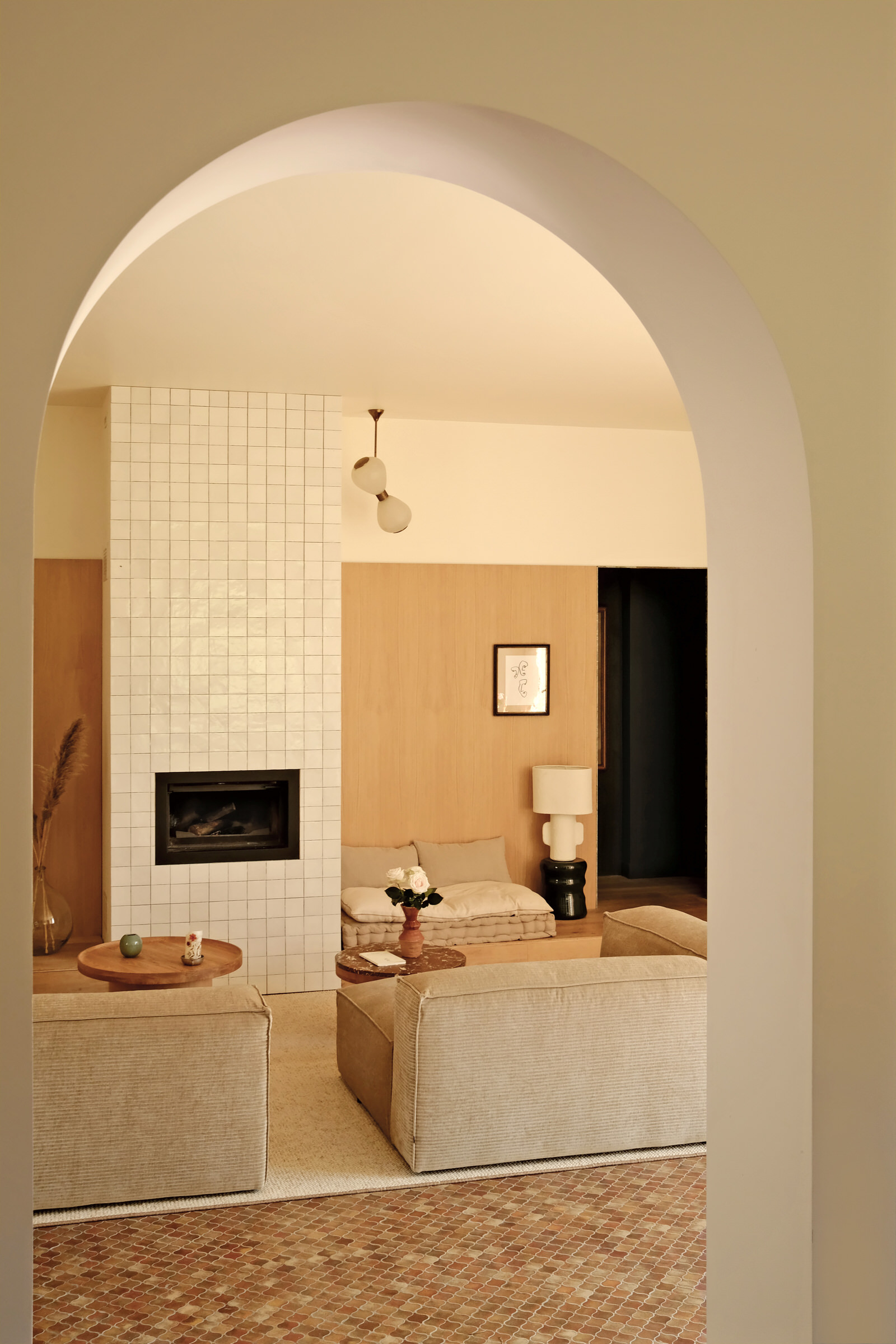 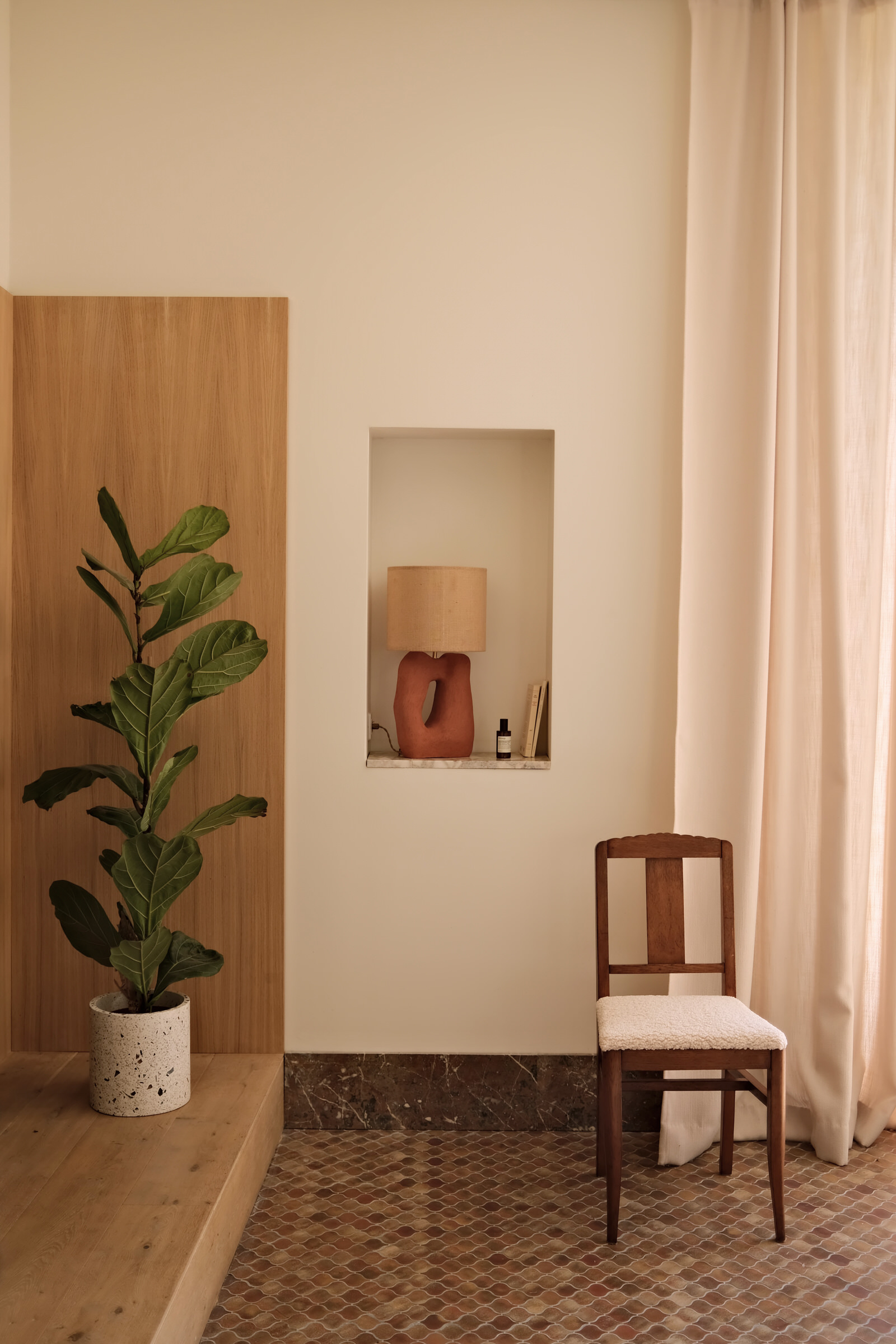 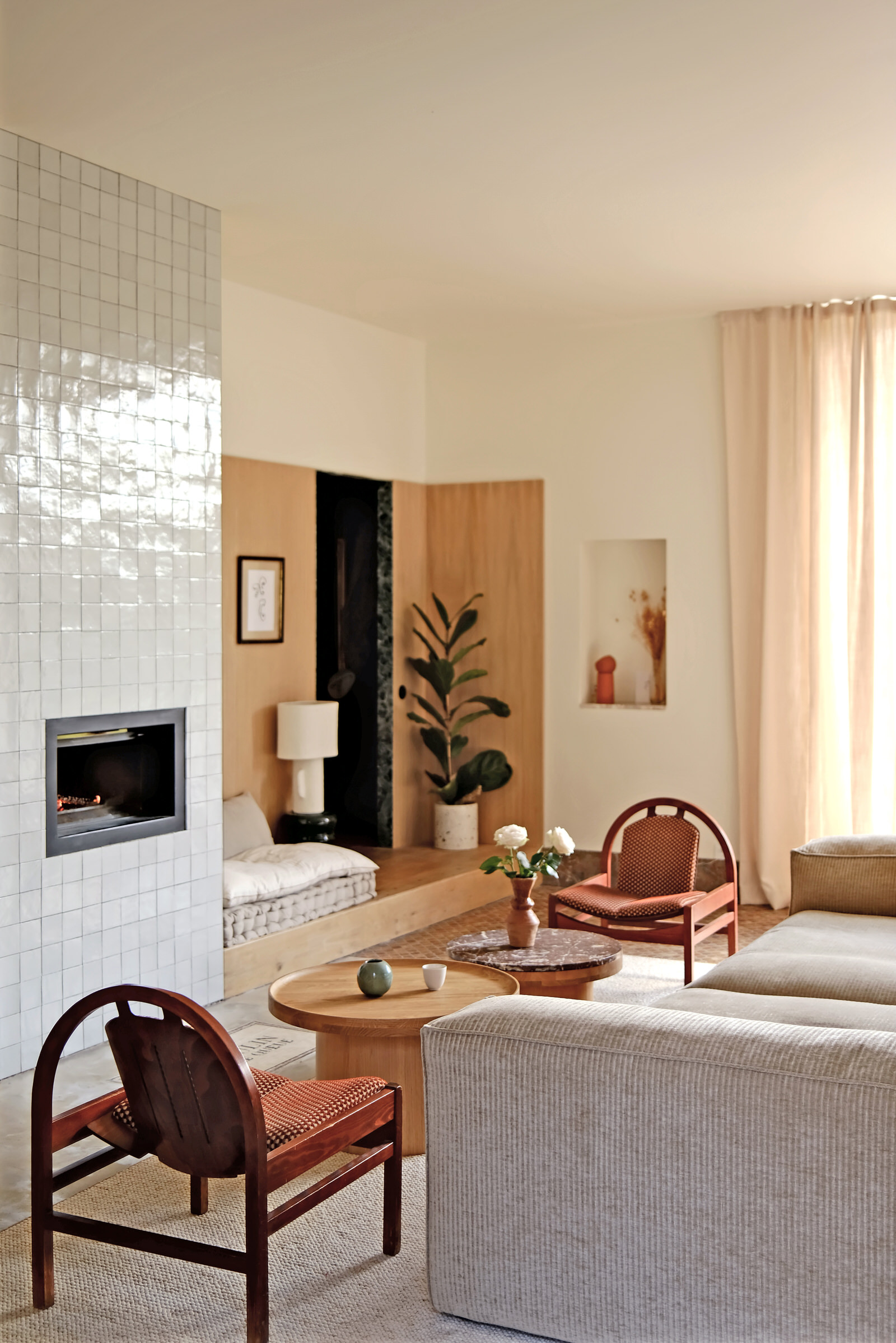 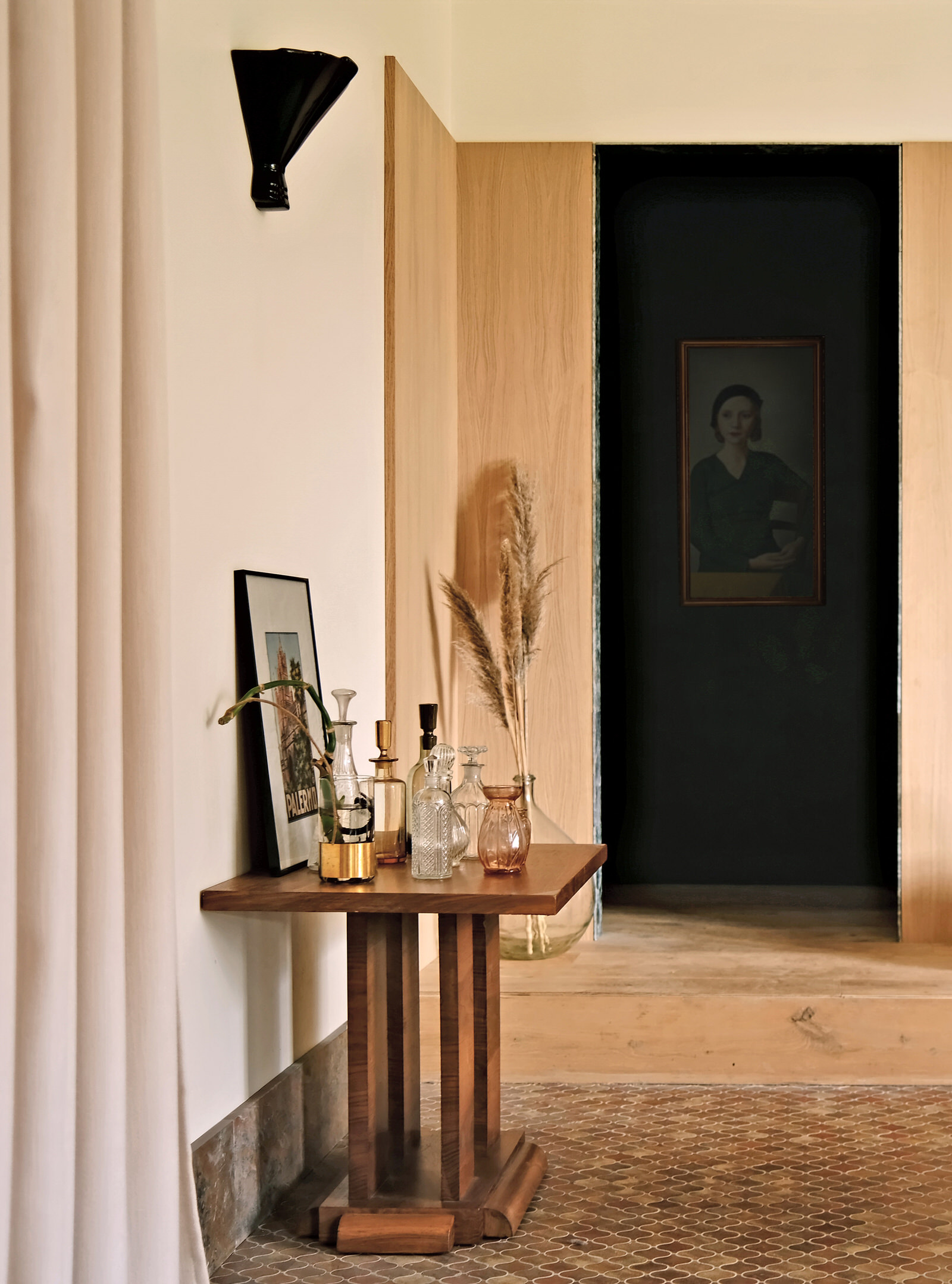 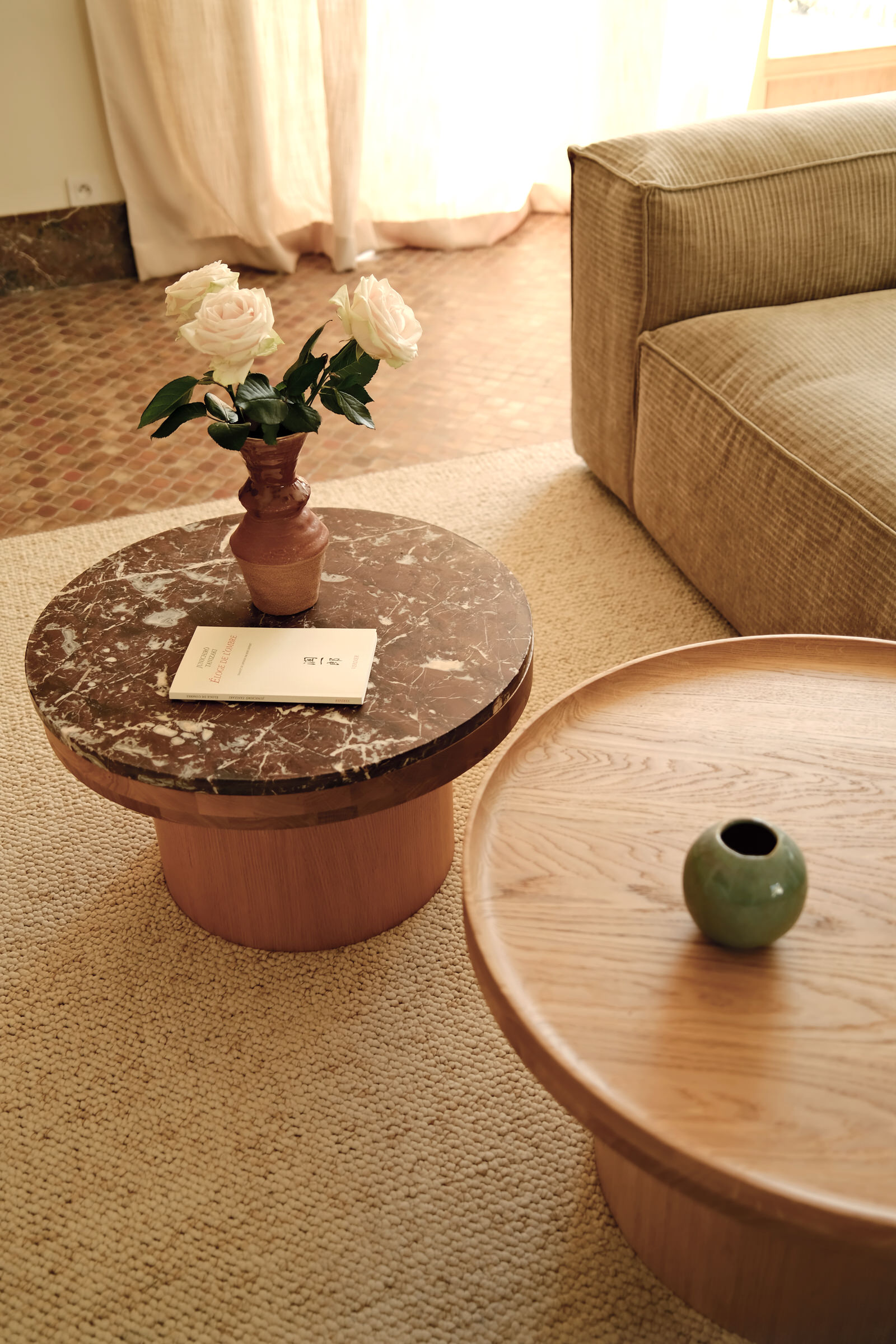 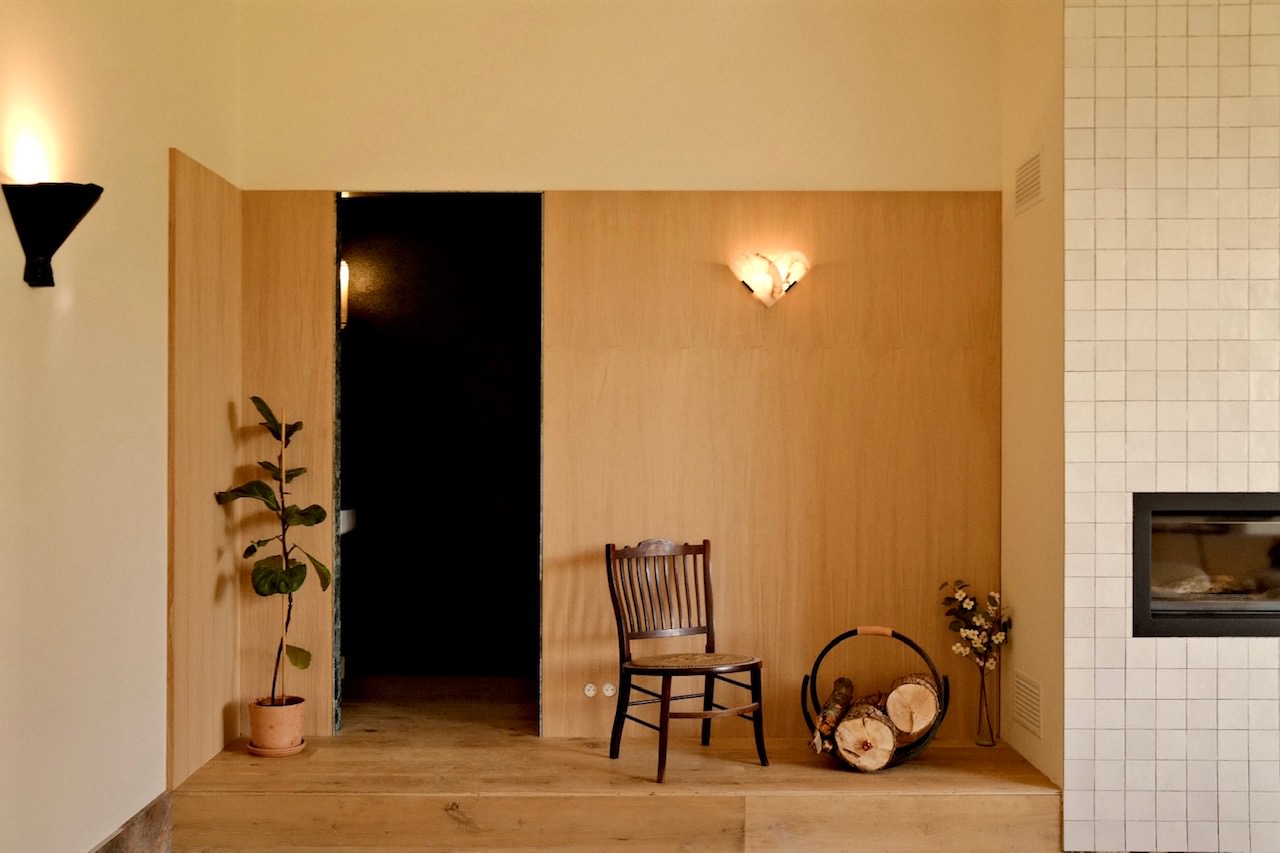 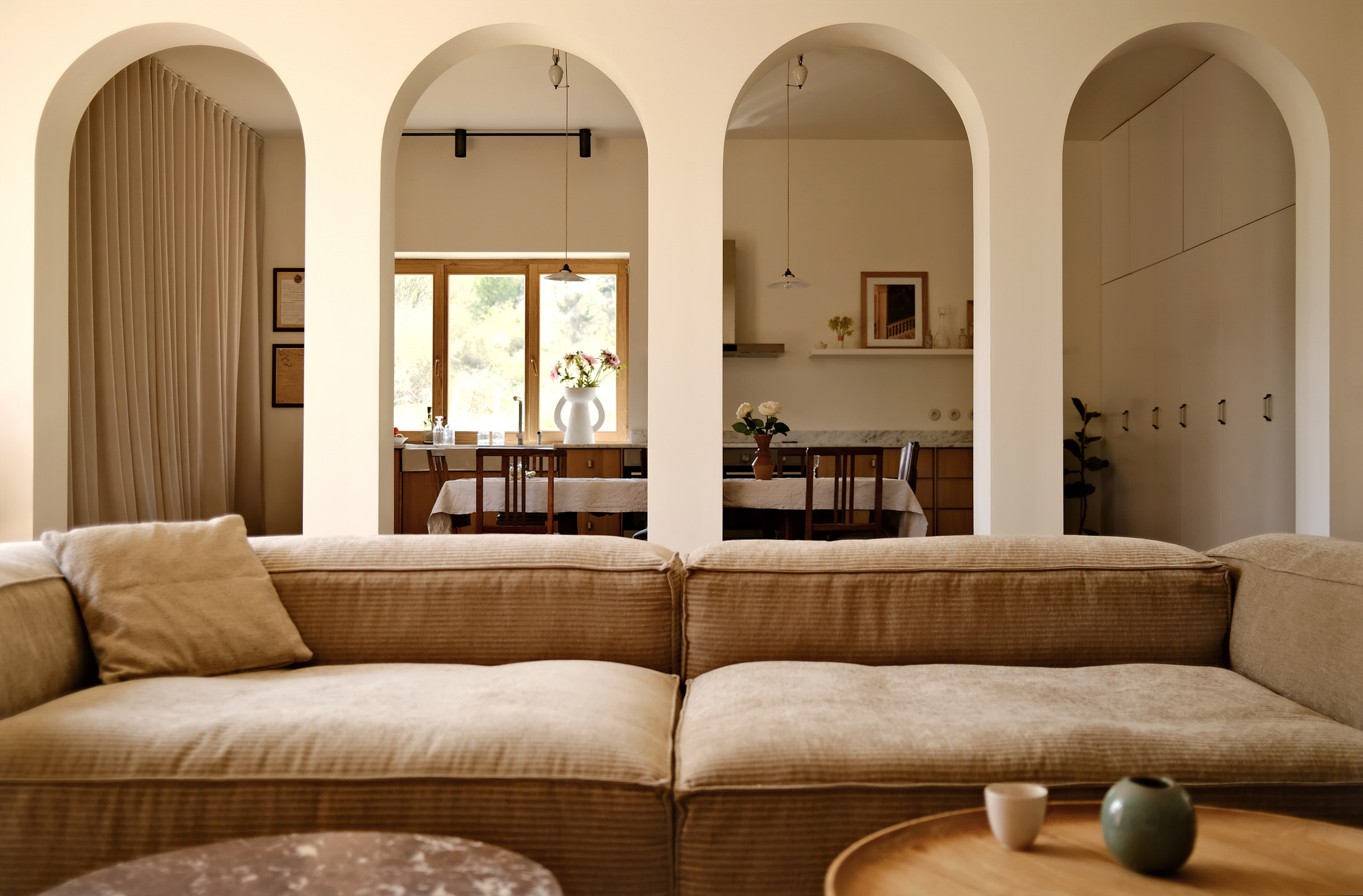 The main residence at Le Moulin.

Le Moulin is a place where time stands still, almost as if someone bottled up its parts and preserved it for posterity. With two hectares of luxuriant downland, a burbling stream, a sheepfold, and orchards brimful of fruit, the charming French auberge sloughs off the stridency of nearby Paris. “For the last three hundred years, the property has been part of the historical fabric of the highly preserved region of Perche Sarthois. Here, the trees are centuries-old, nature reigns supreme, and luxury is without pretension,” states Marine Gabily, a communications manager and part-owner of the property. Here, there’s a novelty in the old world. But it hasn’t always been this way.

Before Marine, along with her co-owner, architect Lucas Madani of design and architecture studio Hauvette & Madani, decided to give the property a much-needed facelift, it had remained uninhabited for over a century. “We wanted to give it back its soul, imbue a spirit of conviviality,” says Lucas. But in doing so, the owners were intent on preserving the property’s time-honoured legacy. Their design language found expression in nuanced palettes, antique furniture, soft colours and thoughtful materials. 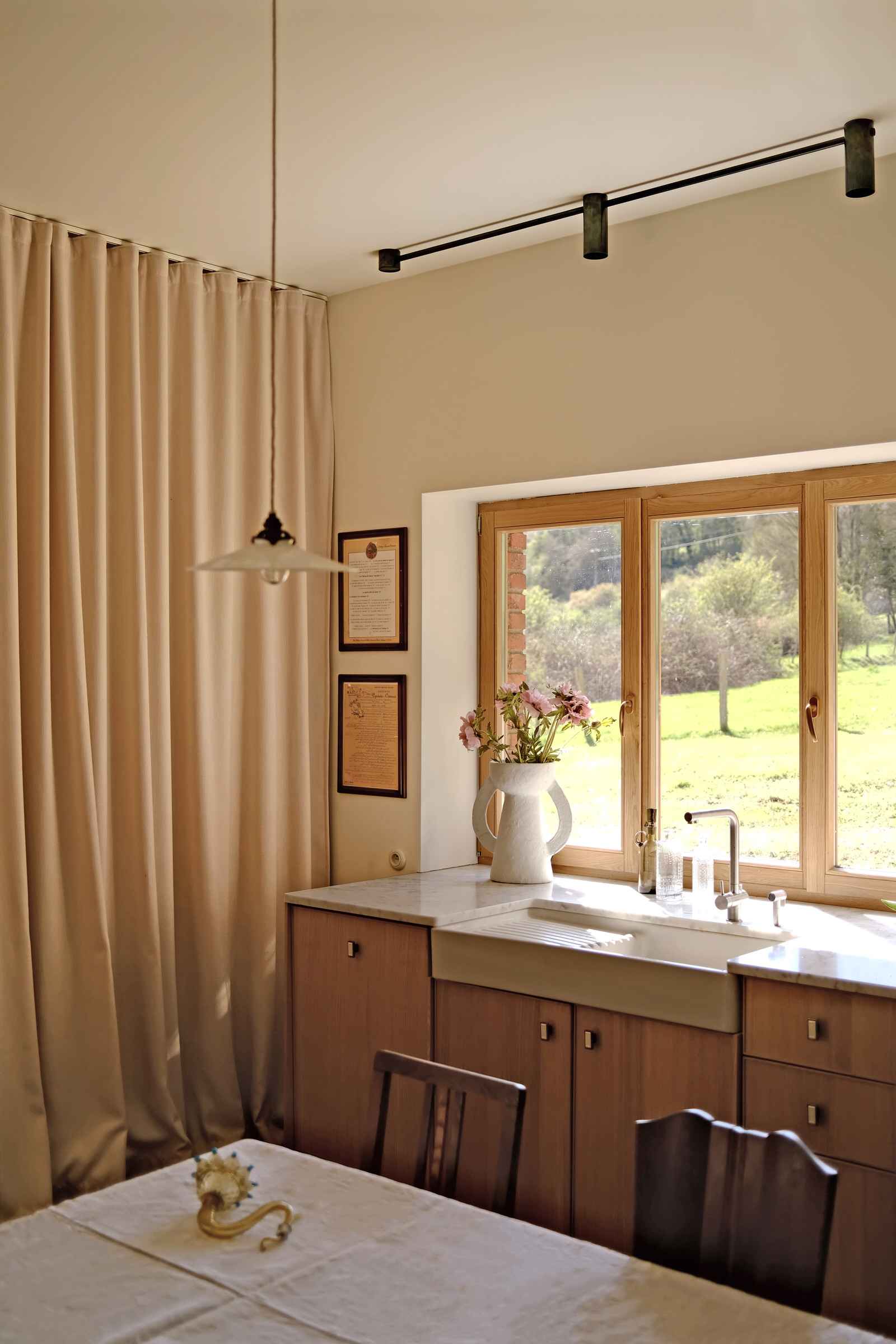 The kitchen in the main residence at Le Moulin. 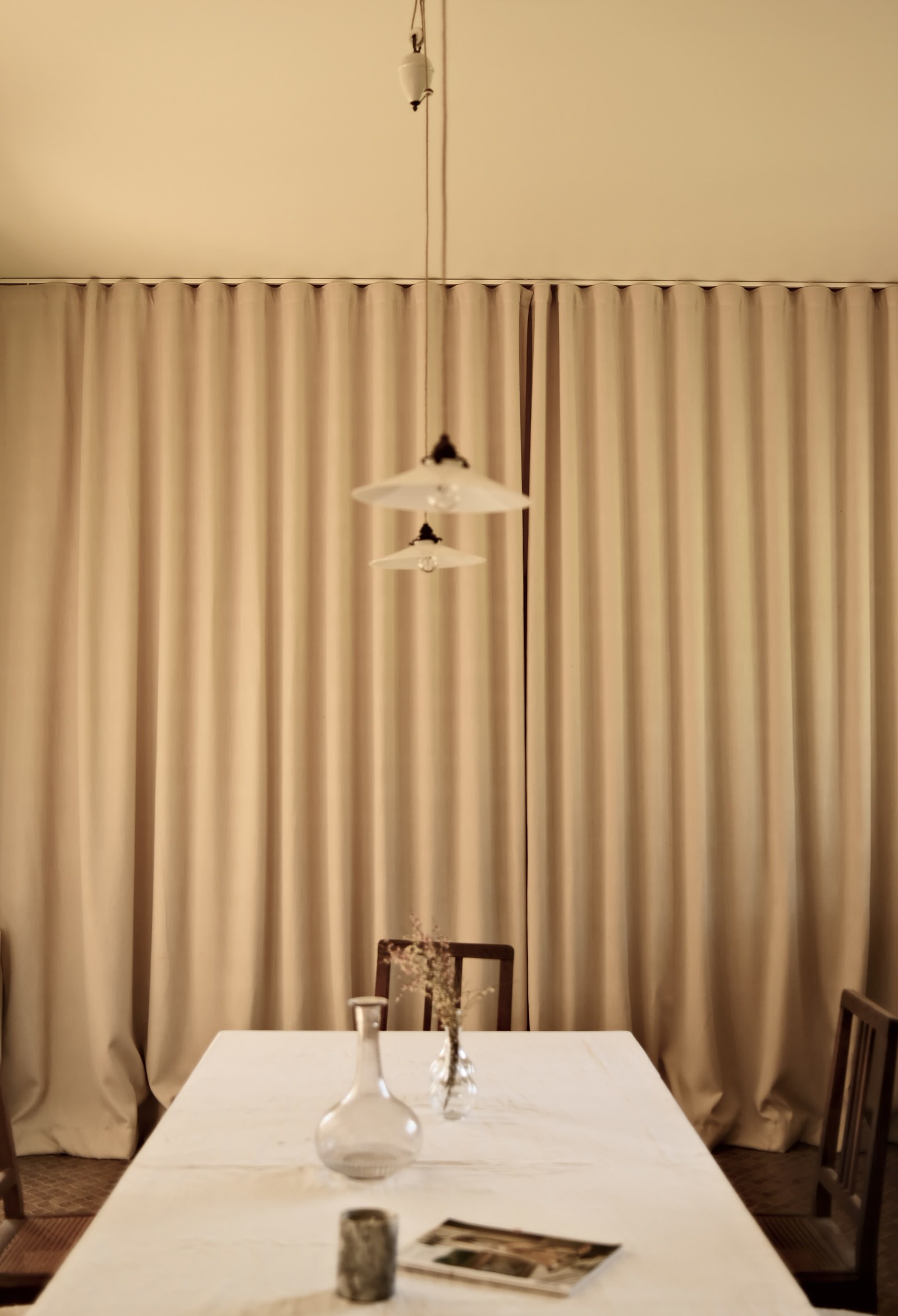 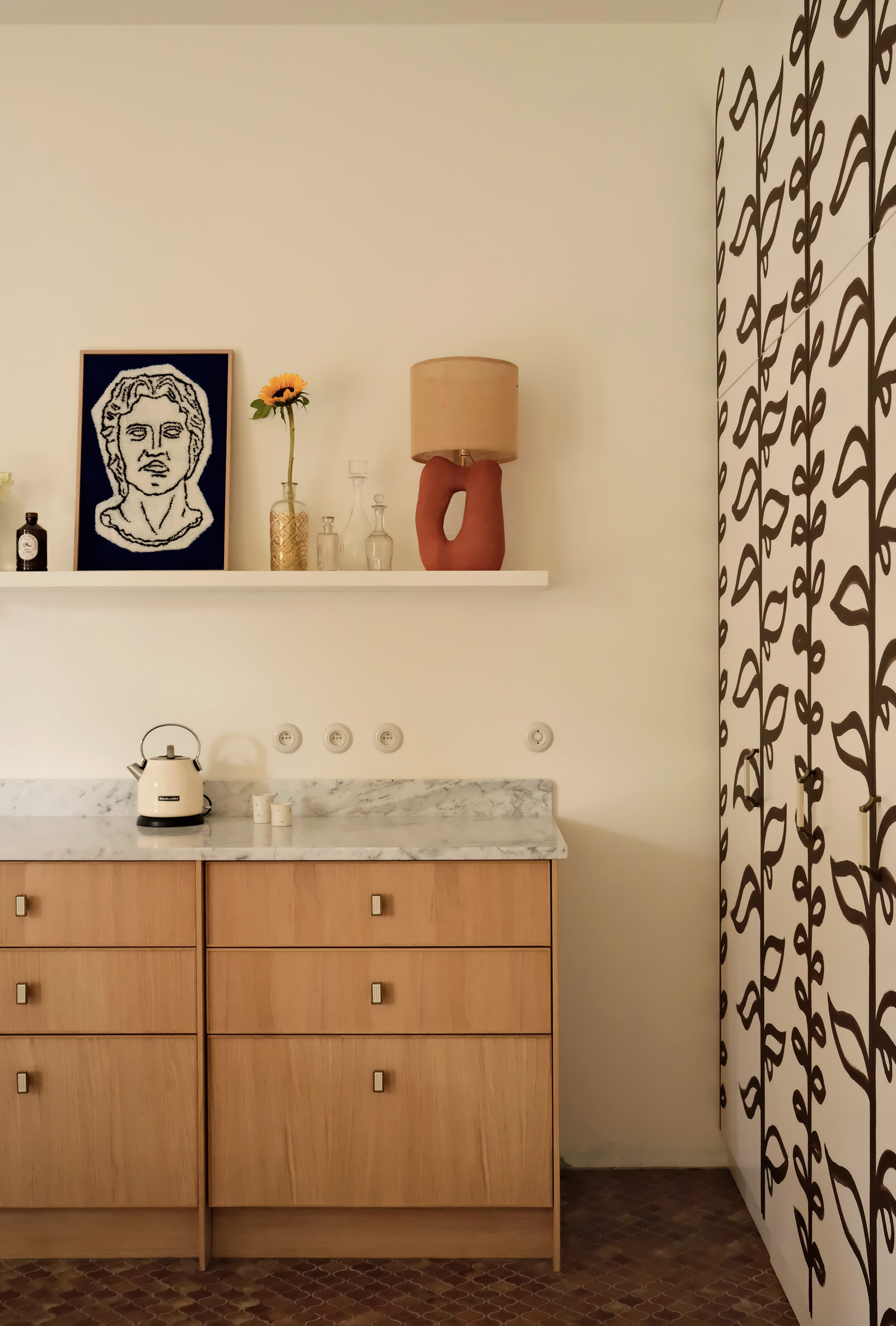 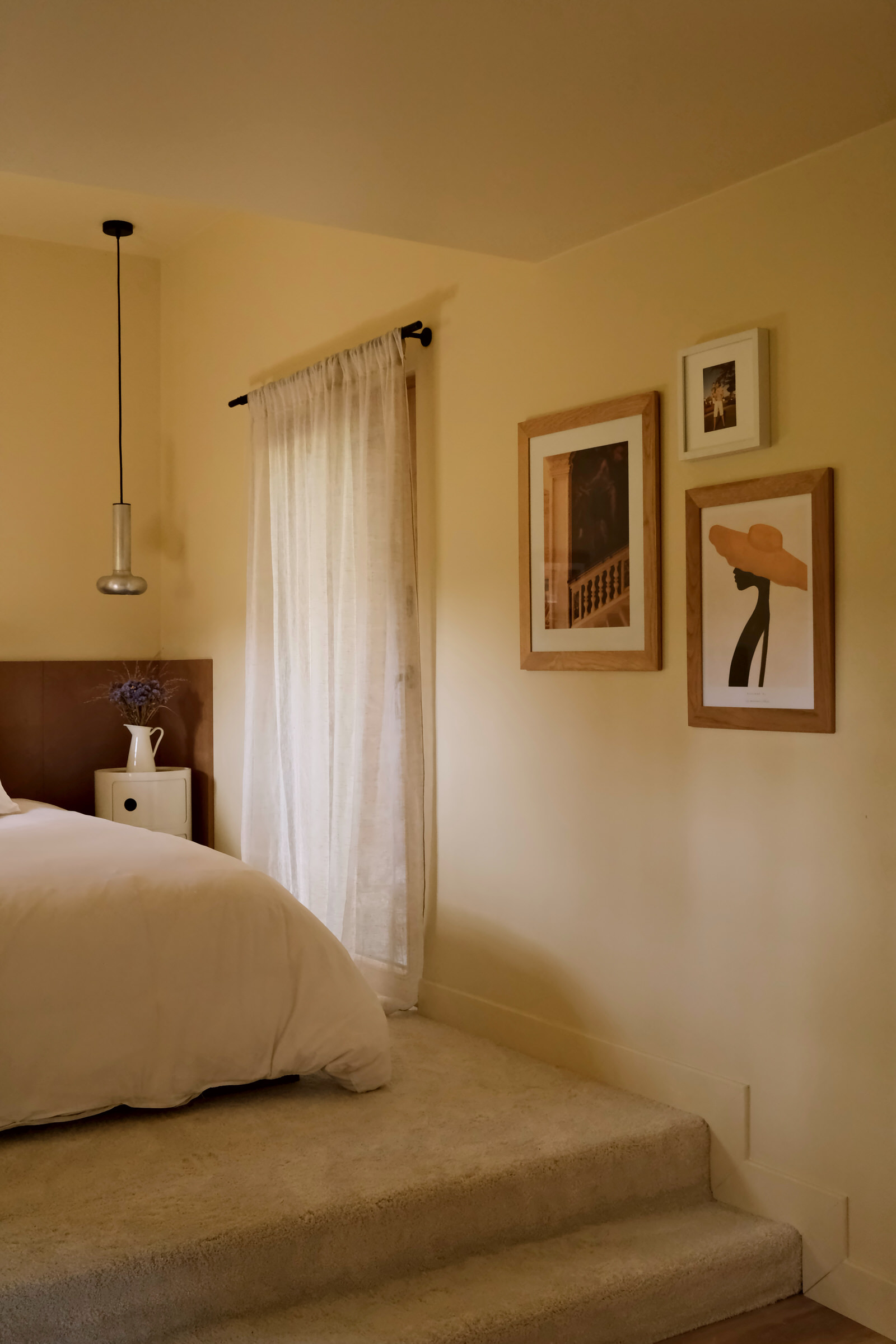 With its own private entrance and bathroom, a carpeted floor and second-hand Lita wall lamps, the 1970s-inspired La Suite is a soft, sunlit sanctuary. 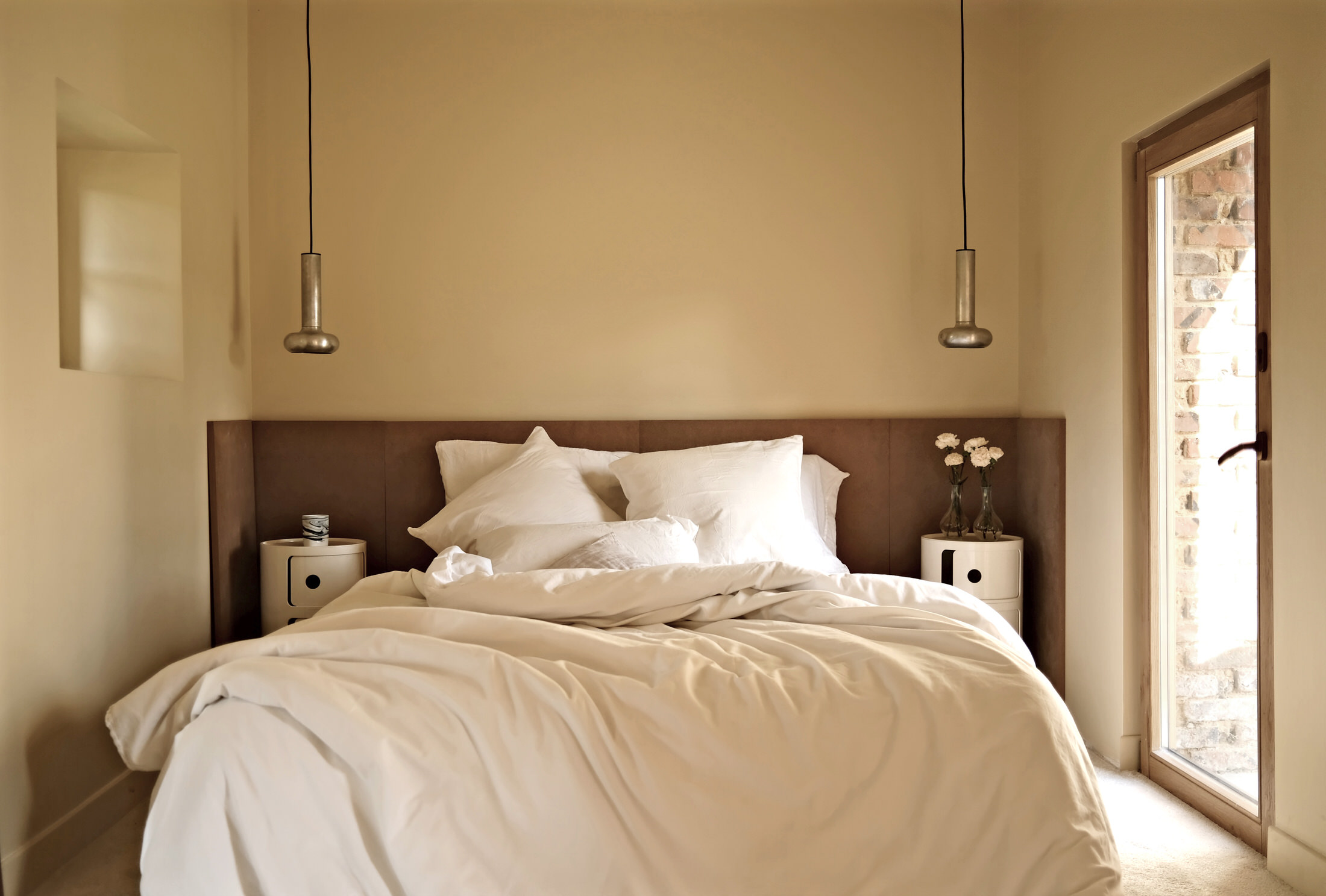 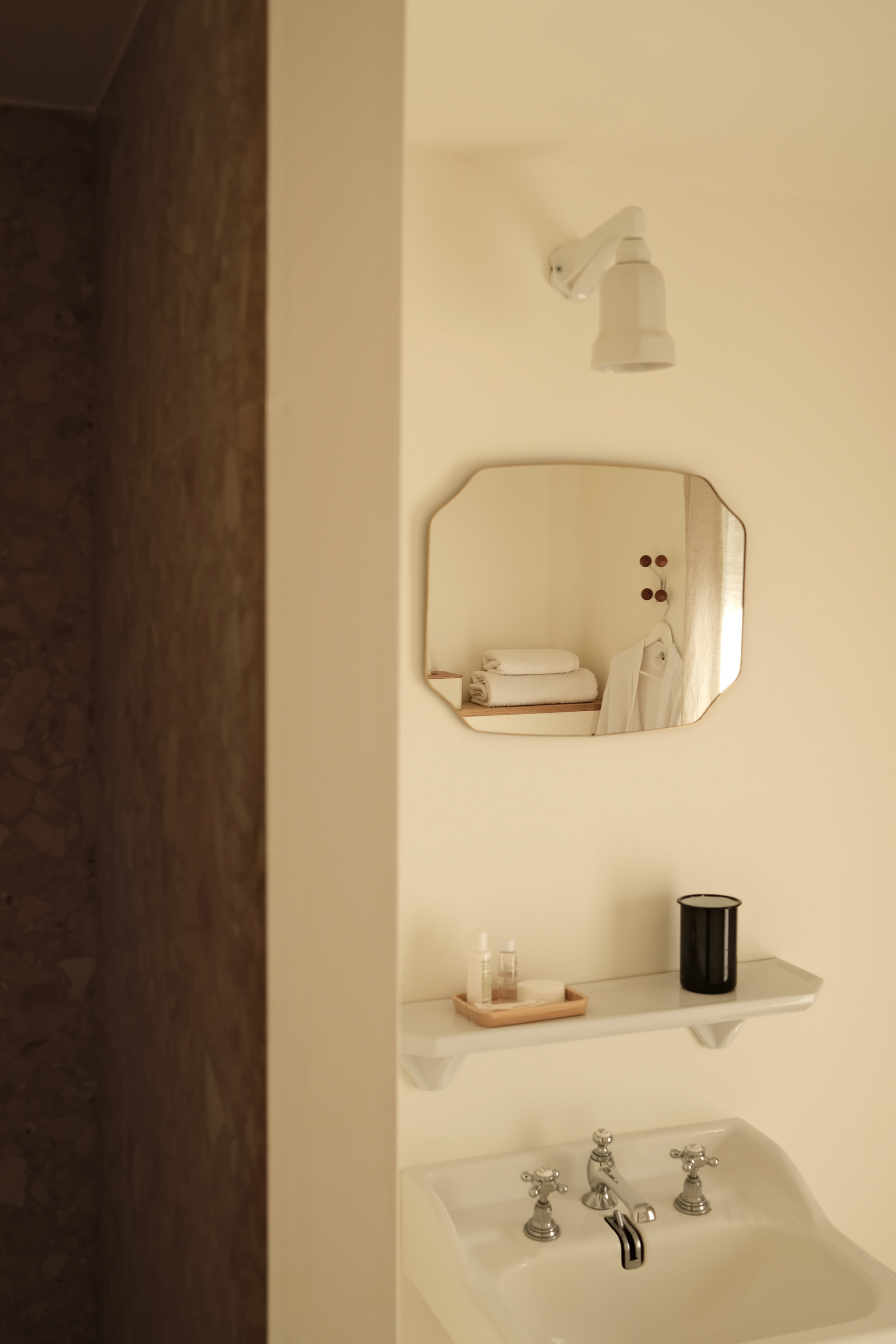 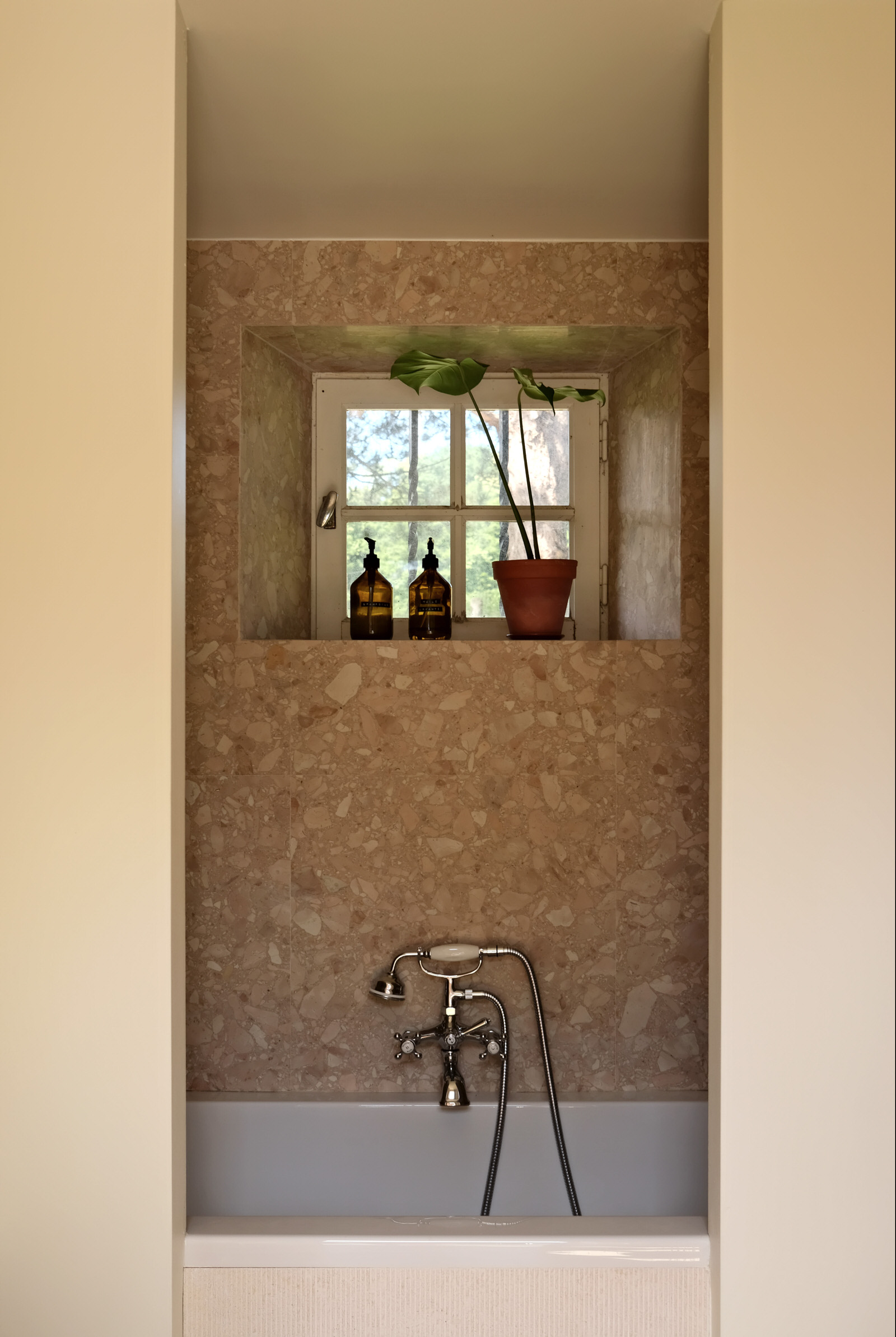 There’s a distinctly personal touch to Le Moulin. Its polished-meets-provincial interiors “offer the promise of poetic stays”, but it’s the freehand pattern rendered by Lucas on the kitchen walls, and the hand-tailored chairs by Marine, that stand out, as if made-to-order, over and over, for each patron. The artists and artworks were handpicked by the owners to meld with Marine’s own mosaics and artistic sensibility. Framed, tufted tapestries by Atelier Paolo soften the peripheral cuts and edges, while ceramics by Vincent Schoepfer and Alkali lend a seriously sensuous, French-country flair.

At Le Moulin, time takes a breather, much like the weekend Parisian sunseekers it routinely hosts. “Here, the concept of ‘slow living’ dominates,” says Marine, referencing the array of tchotchkes and decorations tastefully salvaged from flea markets and yard sales. The furniture in the bedrooms is part of the experience. And so it follows that each piece is carefully barcoded, available for purchase by patrons. Adds Lucas, “We believe in upcycling to give new life. And here, more than elsewhere, we don’t attach ourselves to objects. Almost everything is for sale.” 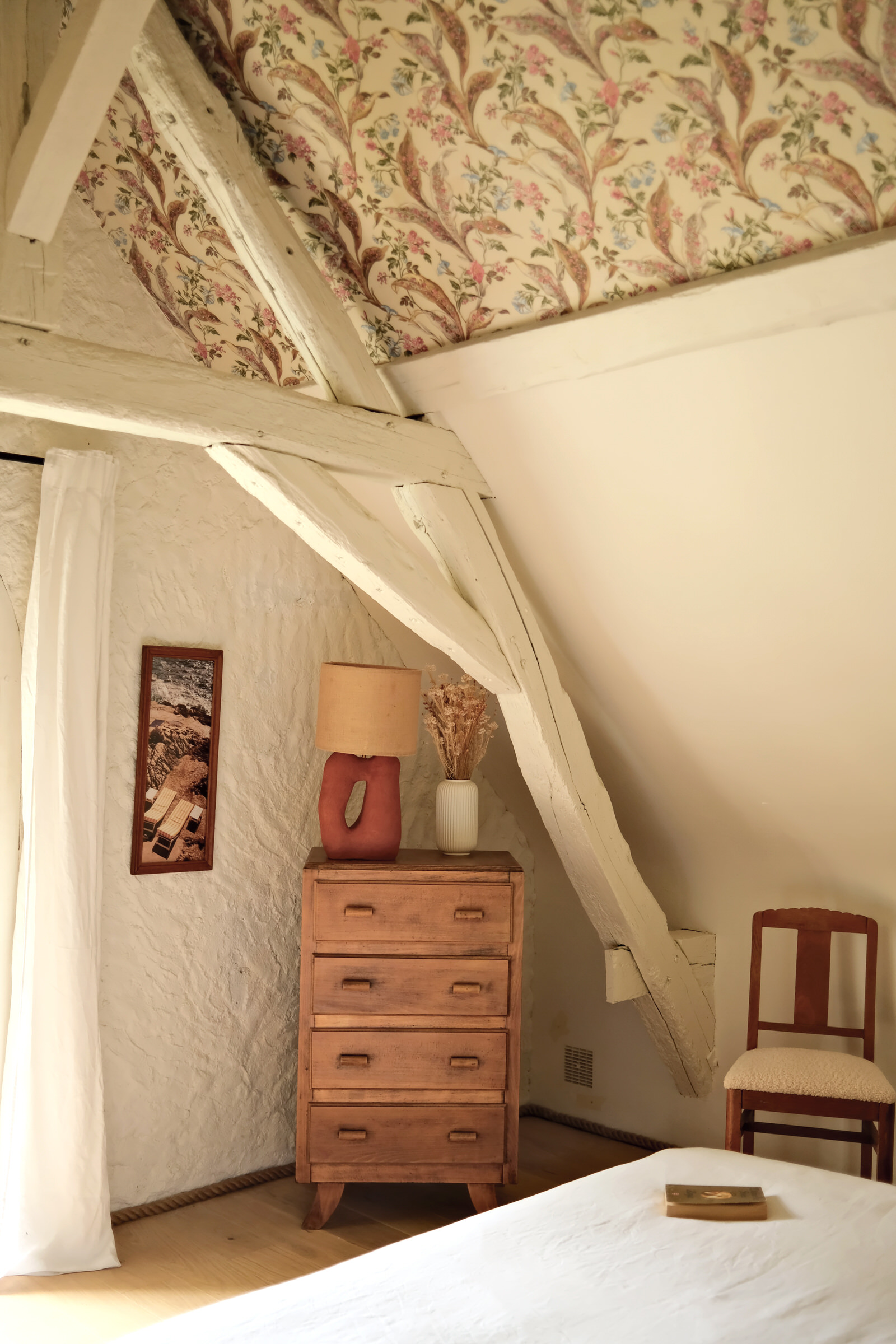 La Bergerie, a duplex that features an eclectic melange of flavours and finds, is the crowning glory of the property. 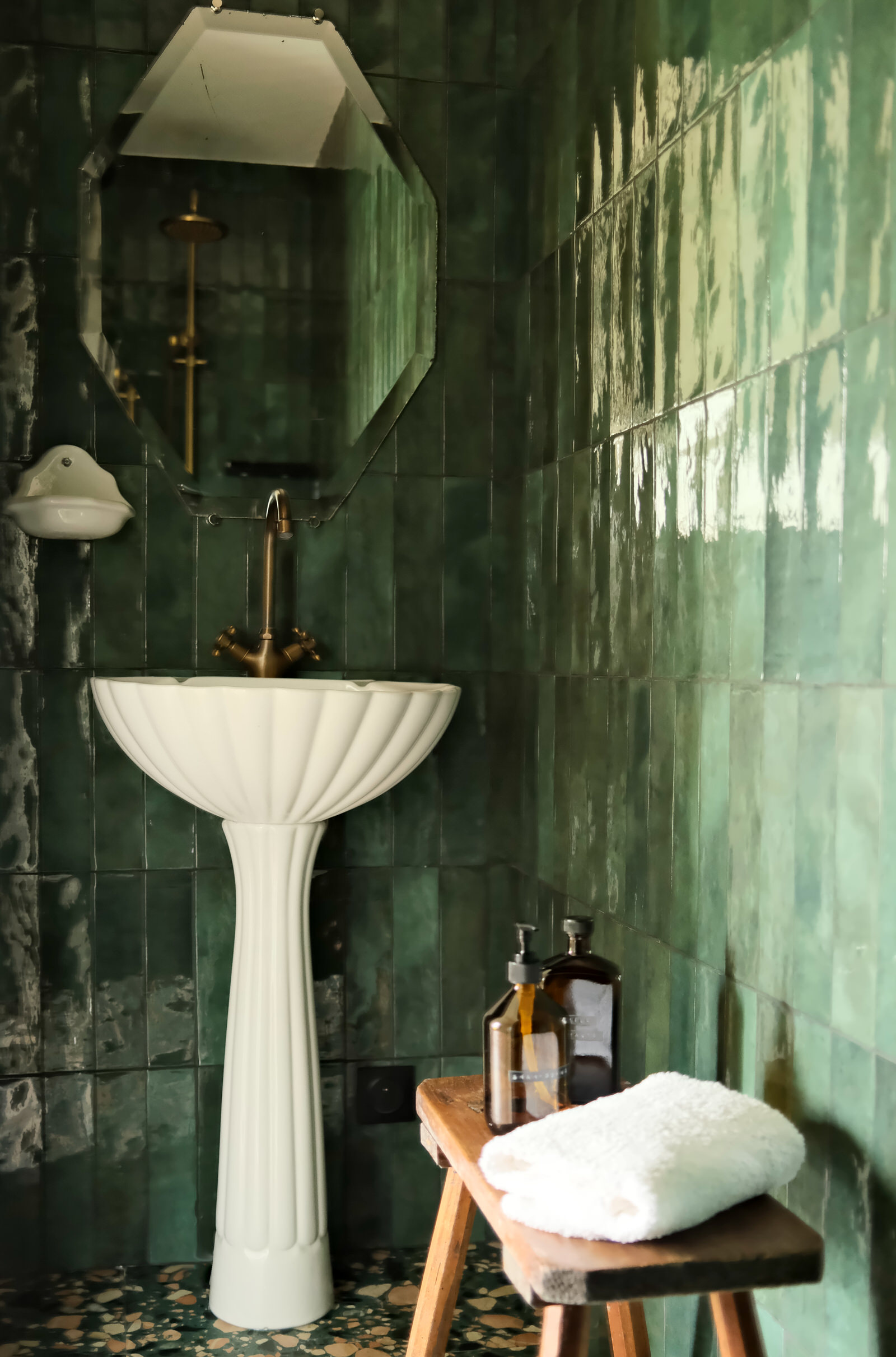 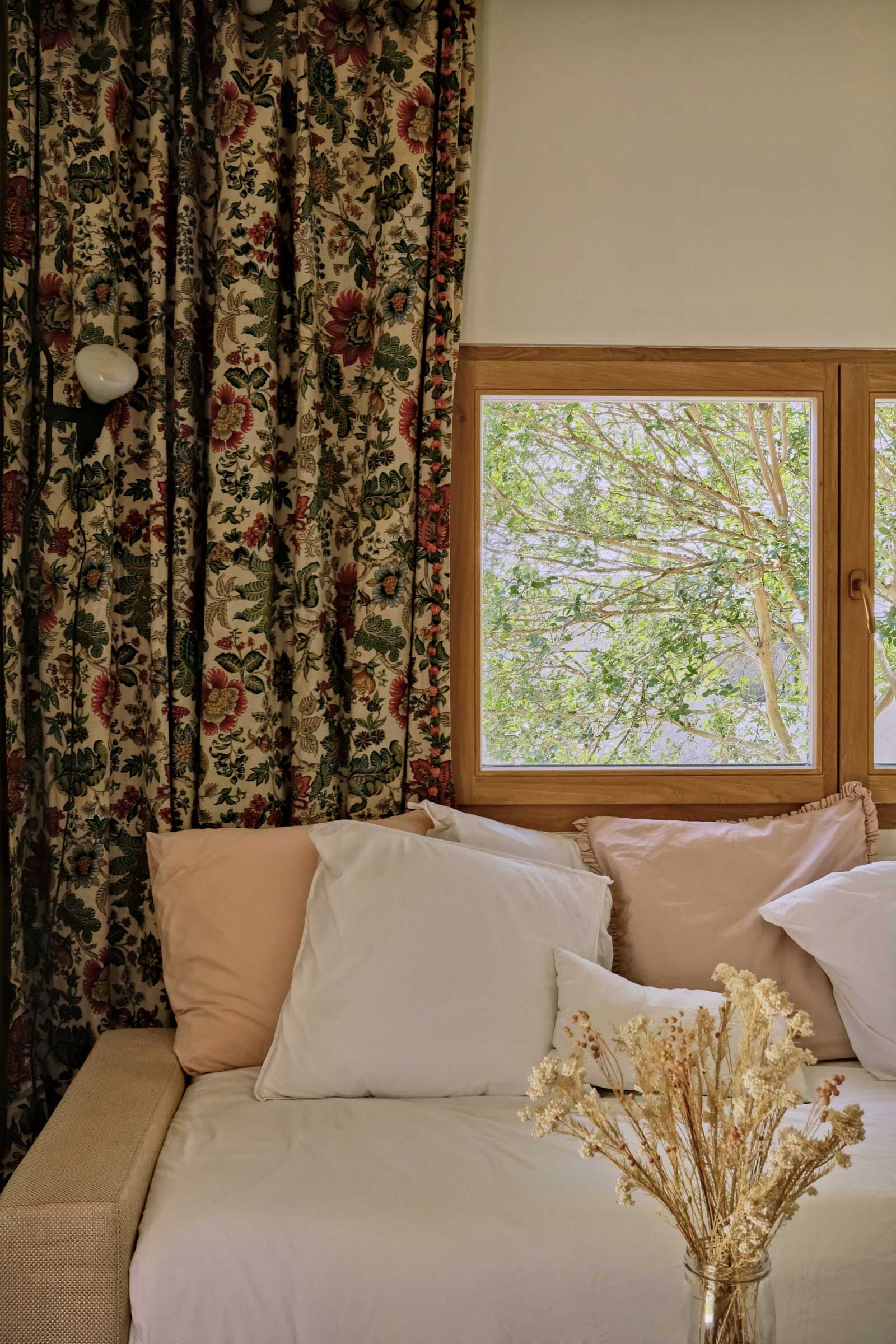 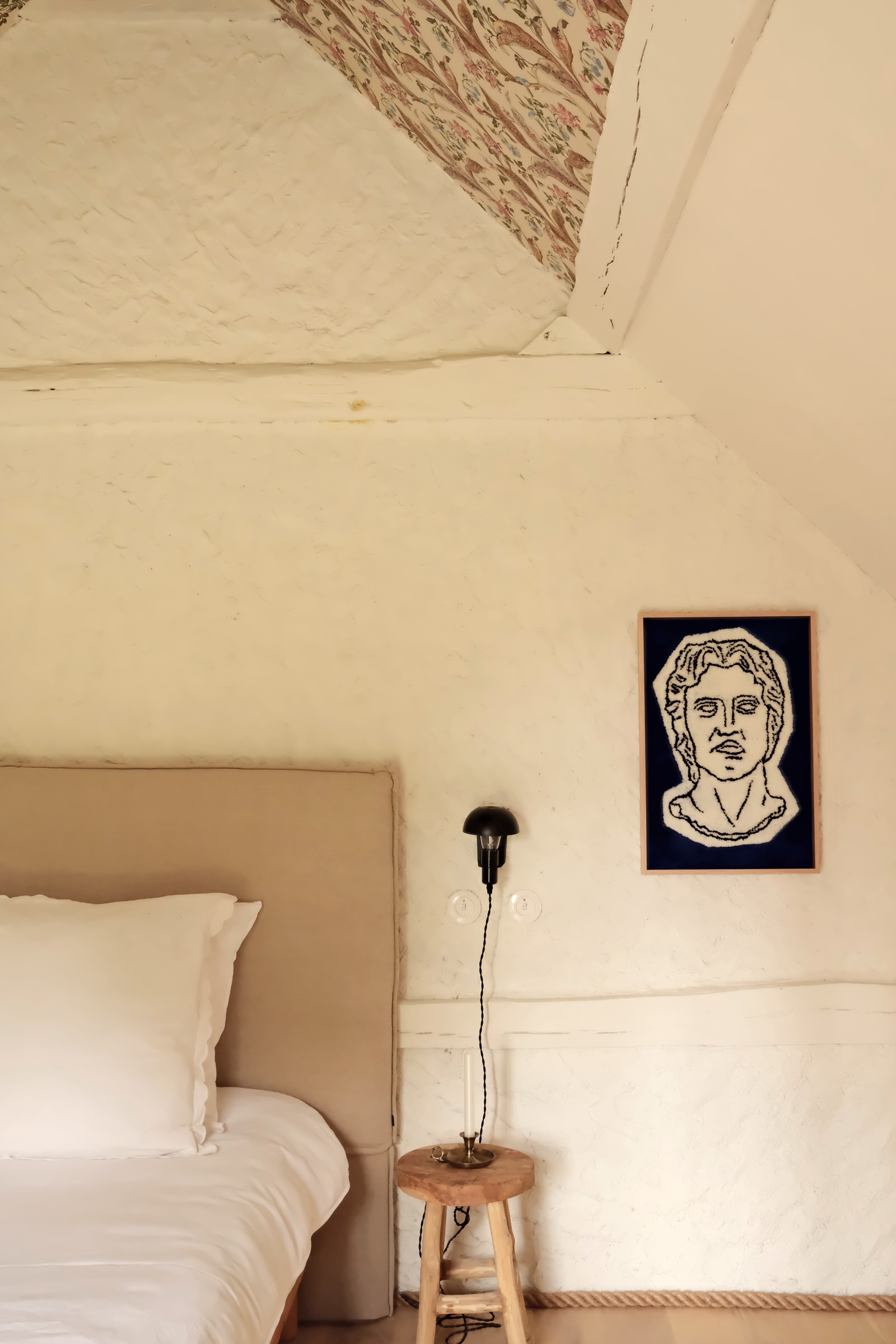 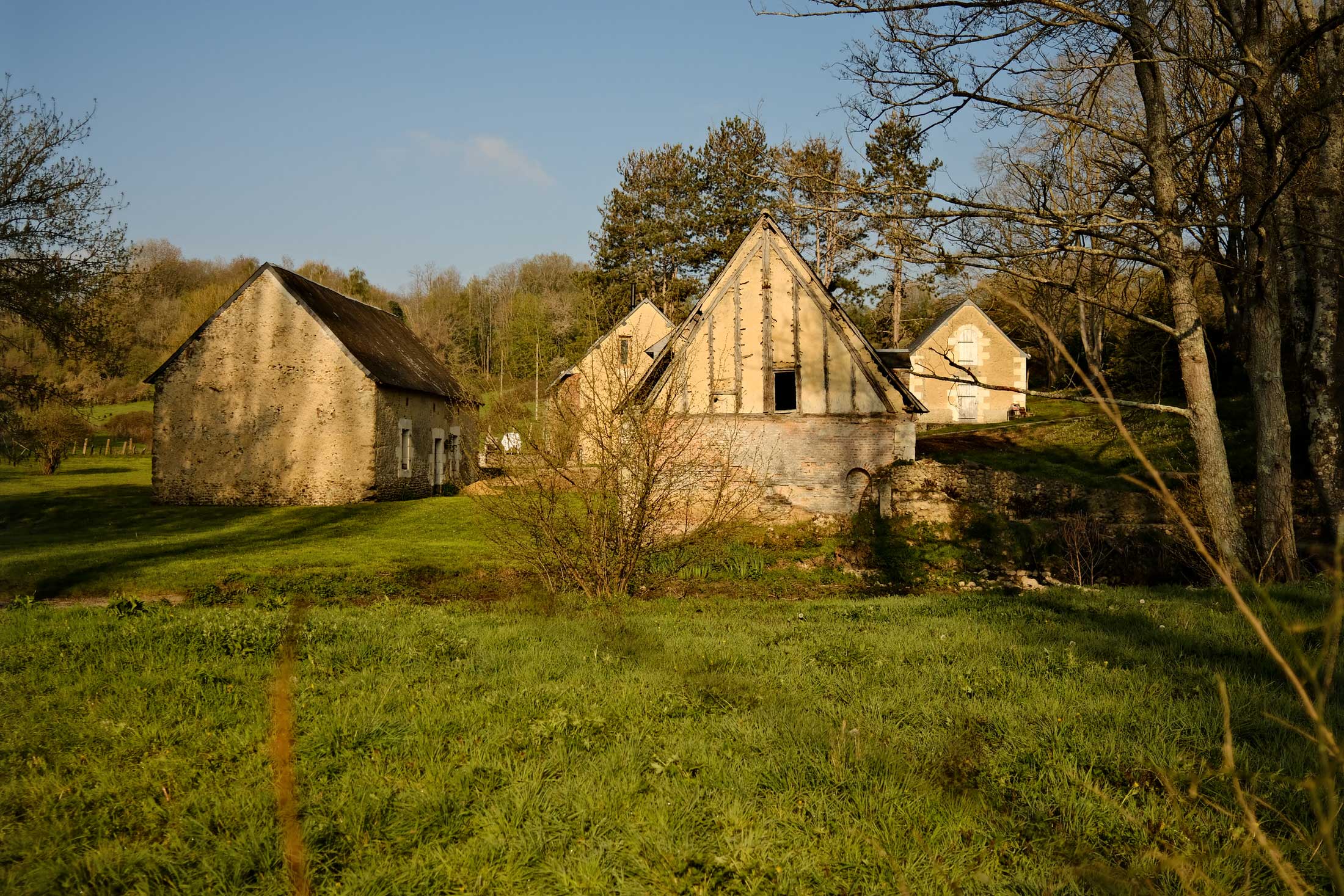 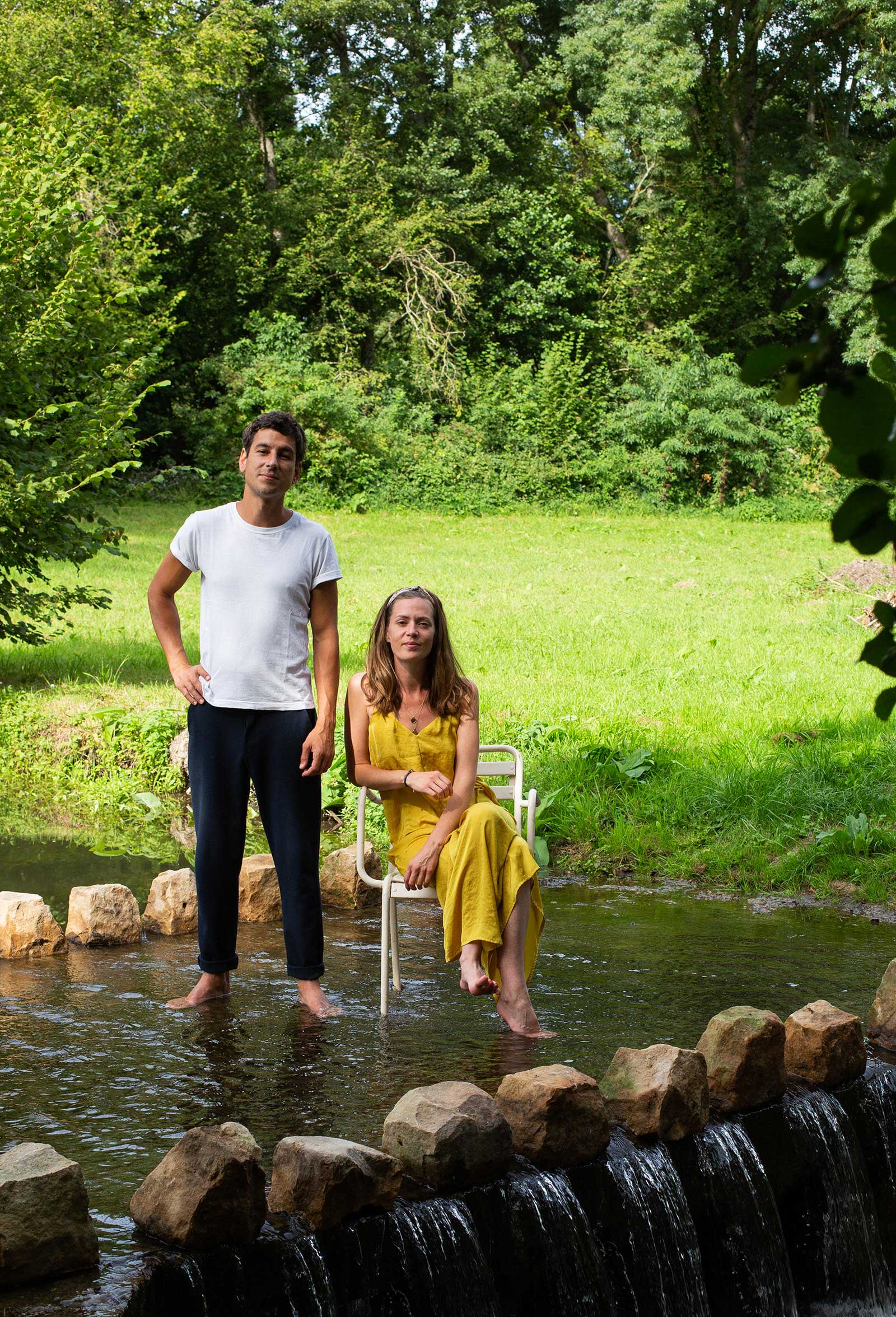 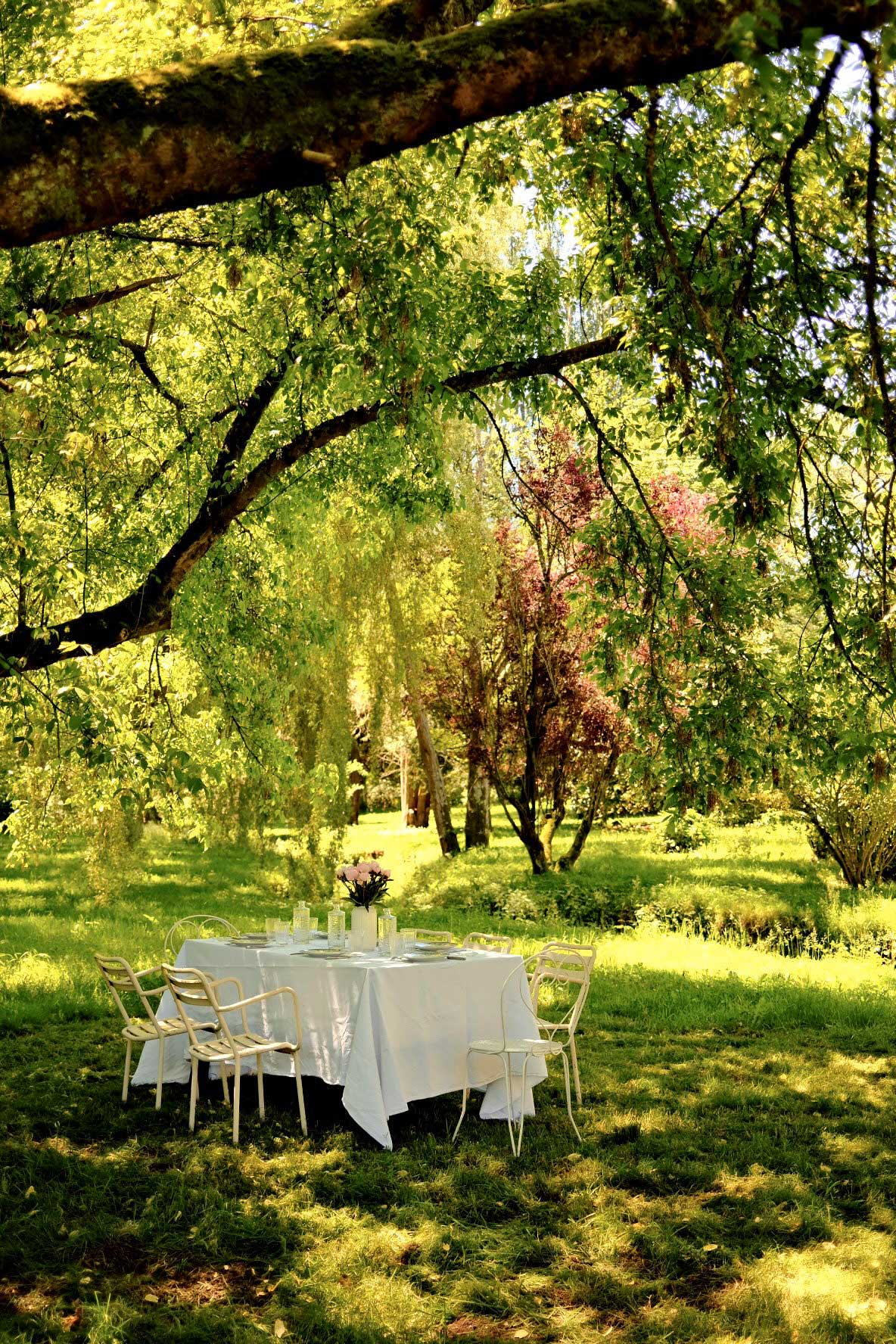 Le Moulin’s four bedrooms are intimate and cosy, holding you in like a warm, woolly jumper. On the first floor, are two big double bedrooms steeped in subtle details, natural-grain wood and muted tones. The pastoral panoramas here are magically lifesize, appearing edited almost, to match the views on the inside.

With its own private entrance and bathroom, a carpeted floor and second-hand Lita wall lamps, the 1970s-inspired La Suite is a soft, sunlit sanctuary where white and light play hide-and-seek. The boudoir is placid, unhurried; promising even the most reluctant of resters a few hours of easy slumber.

La Bergerie, a duplex that features an eclectic melange of flavours and finds, is the crowning glory of the property. On the ground floor, the 1970s Pierre Frey curtains, bequeathed by Lucas’s grandmother, a nod to the family’s heritage, while a shell-shaped washbasin, sourced locally by Marine, is an ode to faraway coastlines.

“With Le Moulin, we wanted to create a haven of memories, a place where we could gather and reconnect with nature, family and friends,” concludes Lucas.