Known for their bold, mood-boosting color palettes and modern maximalist prints – Dusen Dusen is a design-lover’s dream. Originally launched back in 2010 as a print-forward womenswear line, founder and designer Ellen Van Dusen expanded the range in 2015 to include Dusen Dusen Home, a line of equally covetable home textiles and accessories. The brand’s Everybody collection of face-laden home objects made in collaboration with Areaware, brings their signature patterns and color palettes to the often-overlooked places in a home – from a box of tissues to a timer and a waste basket – making it a Design Milk favorite. Read on to learn why we love this line so much and find the Everybody items in the Design Milk Shop! 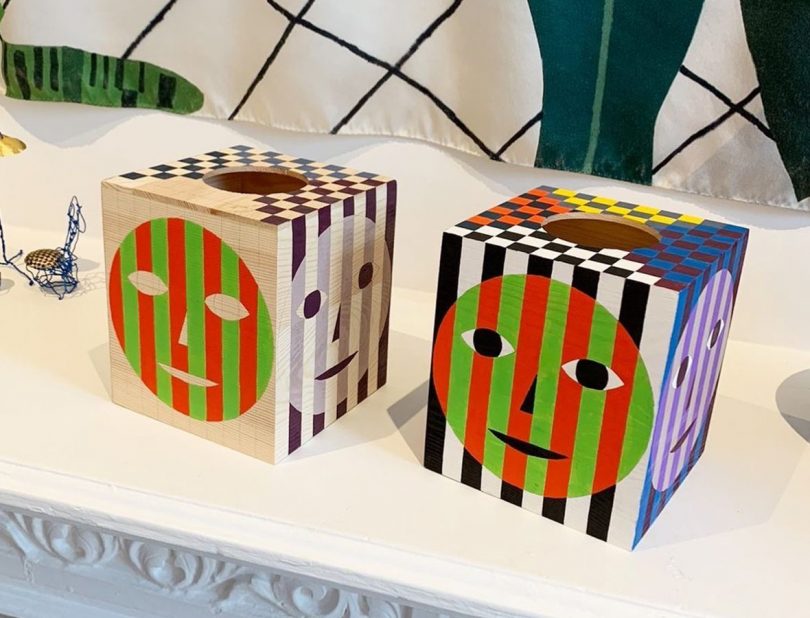 The original iterations of the hand-painted Everybody Tissue Box ($40). \ Photo: Dusen Dusen 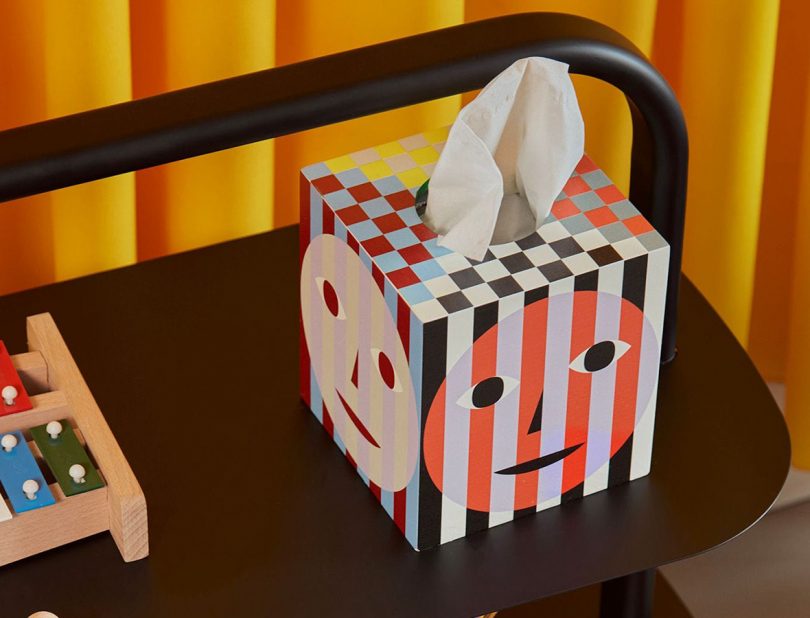 It all started with the Everybody Tissue Box ($40), a painted plywood box designed that fits on top of your standard box of tissues. Ellen Van Dusen first introduced the Tissue Box at a show spotlighting face vessels at Fredericks and Mae: “The original was hand painted and a one off,” recalls Dusen, “I liked the idea of making this super geometric but abstracted version of a face.” Dusen took the opportunity to experiment with color to find the perfect palette: “I saw the process as a color puzzle,” she says, “to find the right combinations to work both on the individual faces and on the checkered top, which is composed of all the colors from each facade.” Creating the tissue box inspired Dusen to turn the Everybody concept into new products (Harry Styles even wore the brand’s Everybody Dog Sweater on an SNL sketch!). 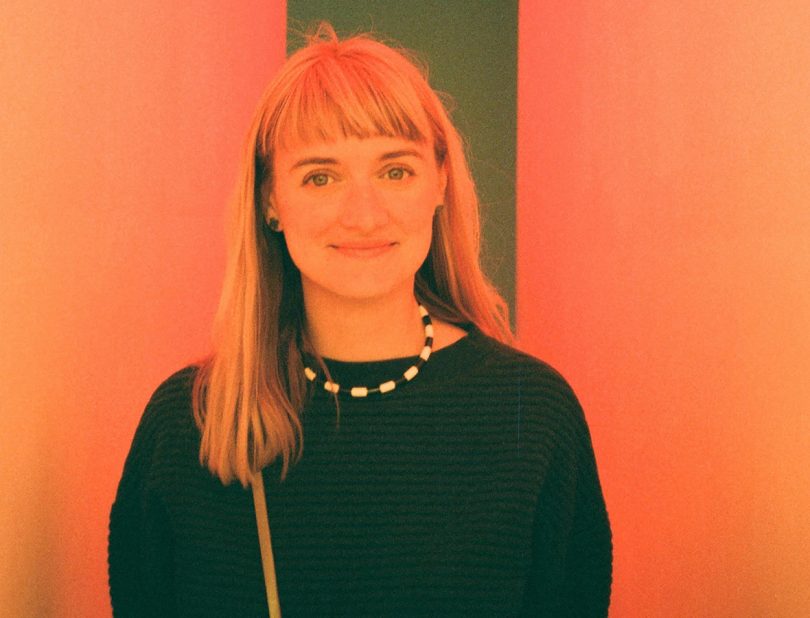 When Areaware caught wind of Dusen Dusen’s Everybody Tissue Box, the brands joined forces to bring it into production, and the rest was history. “When it launched it really took off,” says Dusen, “I saw a lifespan in the ‘Everybody face’ and liked the idea of anthropomorphizing different kinds of everyday objects.” Areaware and Dusen Dusen went on to turn the Everybody face into a collection. 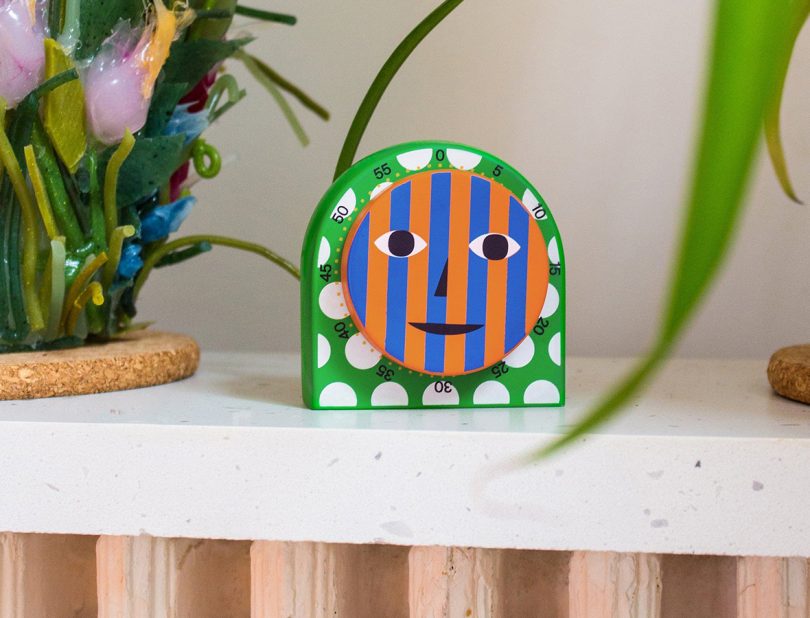 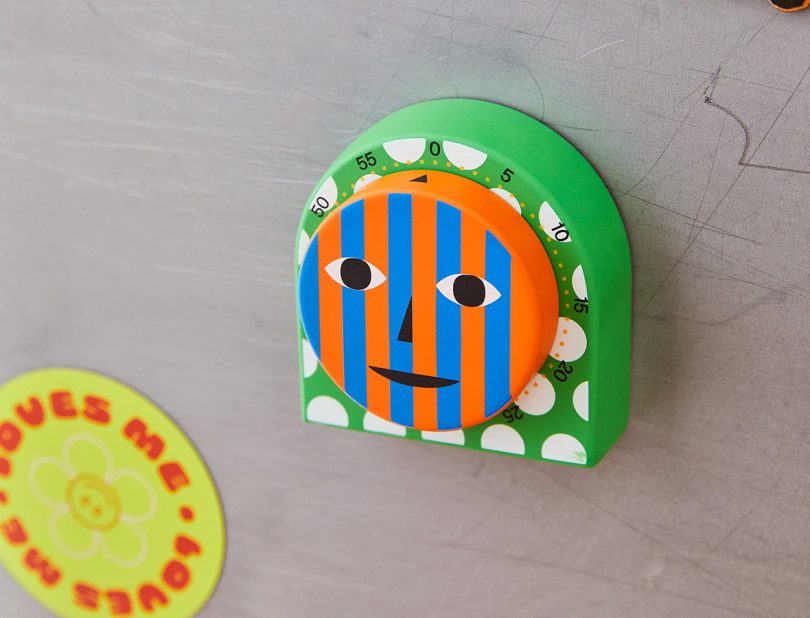 Next in the Everybody lineup is the Kitchen Timer ($48) – a functional kitchen tool that turns a seldom acknowledged home object into a fun and fashionable accessory. The Everybody Kitchen Timer has the classic circle dial typical of old-school kitchen timers, but with modern day upgrades like the magnetic backing that effortlessly clings to your fridge, and the eye-catching, high-contrast patterns that reveal the collections’ signature face. “I had the idea for the kitchen timer when I couldn’t find one that I liked using. I hate using my phone as a timer,” says Dusen, “The classic circular dial of the timer lent itself so well to a turning version of the face.” 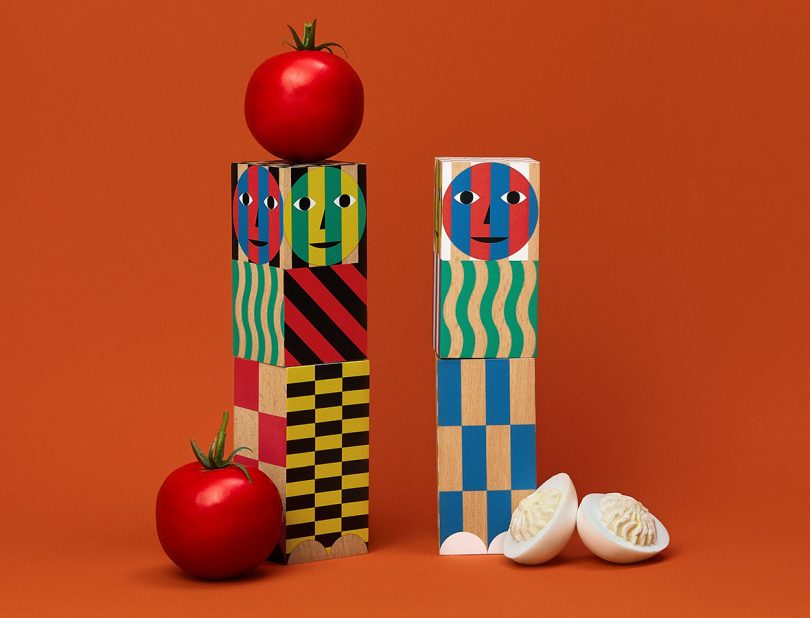 The Everybody Grinders ($48) bring the Everybody line’s playful personality to your counter and tabletop. The grinders are made of 3 beechwood blocks, giving the Everybody face an extended body “outfitted” with contrasting patterns. “I liked the idea of a little person sitting on your table,” said the founder, “when turning to grind, a new outfit combination appears, sort of like those books you have as a kid that are split into 3 sections (head, body, legs).” 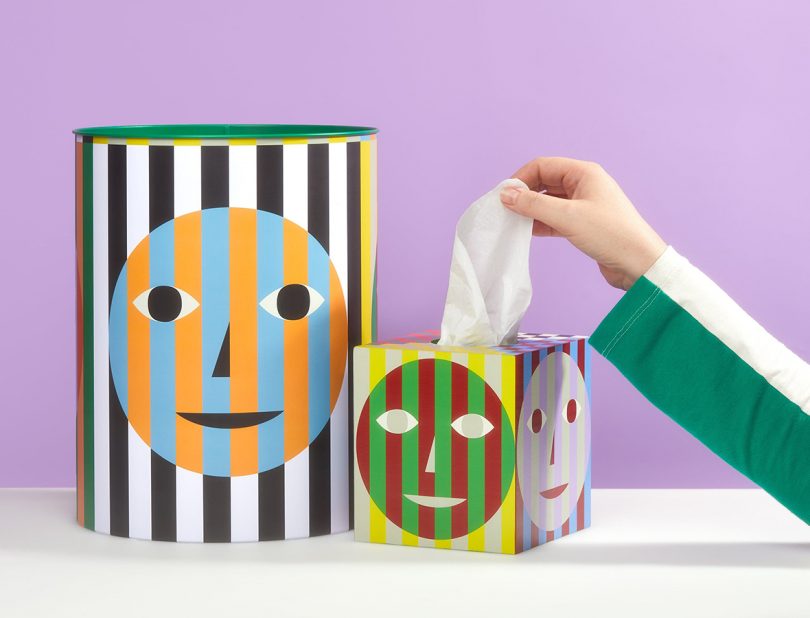 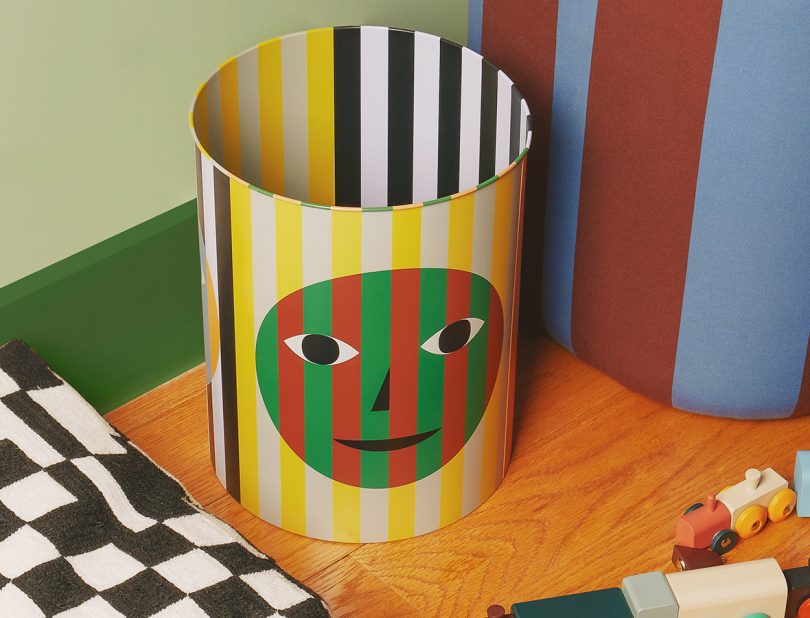 Dusen Dusen’s Everybody Bin ($75) turns an essential (yet rarely considered) home object into an eye-catching decor accessory. The tin bin features the Everybody face in various, meticulously designed color palettes, giving users the flexibility to spotlight a different colorway with a simple spin of the can, so you can witness the bin’s whimsical design from any angle. “Areaware came to me with the idea of the bin, which I loved too,” says Dusen, “I grew up with tin trash bins in my house, so it felt like a natural thing to design.”

Whether you’re fixing to color coordinate your space with the Everybody collections’ spectrum of complementary hues or use them as pops of color in a neutral dominant room, you’ll be positively psyched to have the Everybody goods at home.

Shopping the Everybody collection by Dusen Dusen for Areaware?
Share your haul and tag us @designmilk to be reposted on our Instagram!
Ads

Take 5: A Comforter-Like Housecoat, Coffee You Melt to Brew + More