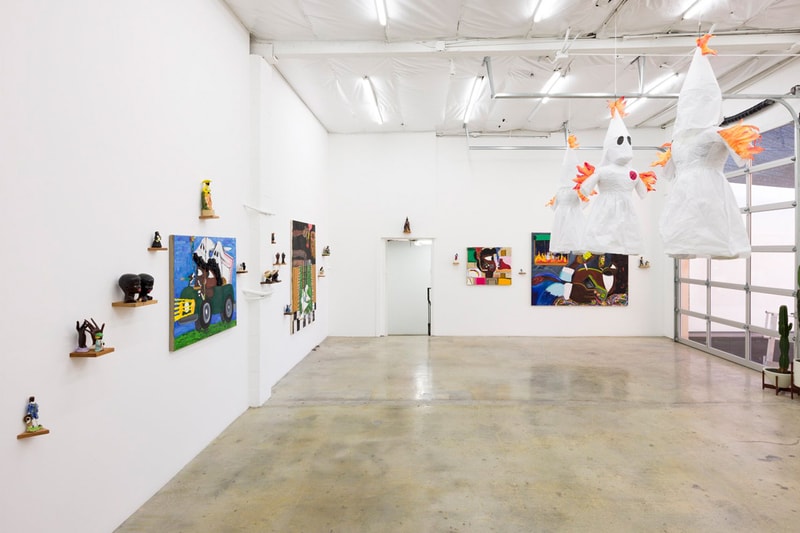 Humor and shock value are several characteristics you can use to describe the work of Los Angeles-based artist, Devin Troy Strother. But more than just cheap laughs, Strother creates complex narratives by subverting stereotypical themes pertaining to his Black heritage in an effort to reclaim ownership and dispel their cultural weight.

The artist is set to unveil a solo exhibition at The Pit LA, titled “Undercover Brother.” Overlaid across a series of new collages, paintings, and ceramic sculptures, Strother continues deviating what paintings are and borrows familiar themes from Philip Guston‘s oeuvre, most notably in the form of harrowing depictions of the KKK.

A highly contested figure in his own right, Guston’s last show was recently canceled due to what contesters argued as its glorification of Klansman. However, Guston was a Jew and in fact had many of his early Klansman artwork, also known as “Conspirators,” torn up in front of him by members of the KKK and LAPD many decades ago. He was horrified at the cruelty at the hands of the Klan and aimed to document in any way he could.

“Guston tried to understand the mentality of hate,” said the artist in a statement. Strother’s mother’s side of the family had to flee Lake Charles, Louisiana after harassment from the KKK, so like Guston, the reappearance of them within his work is a personal one.

Having appeared in galleries across the world, Strother has shown to be a meteoric figure in the world of art for his unique approach and unabashed exploration into identity. “Undercover Brother” will be on view from October 30 to December 18.