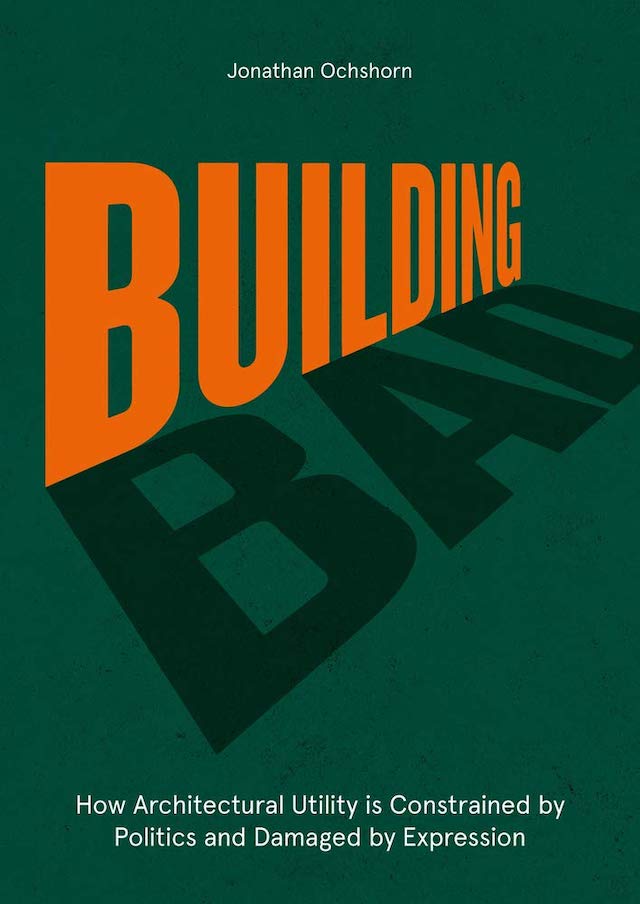 Building Bad: How Architectural Utility is Constrained by Politics and Damaged by Expression
by Jonathan Ochshorn
Lund Humphries, September 2021

In this book, the author argues that architectural functionality is often constrained by political and economic forces, while it is also effectively undermined by modes of expression. Utilitarian building elements—for example, windows or skylights intended to bring daylight into offices or factories—may be subject to excessive heat gain, thereby coming into conflict with an evolving politics of energy conservation and global warming mitigation. Yet at the other extreme they may be deployed as part of expressive systems whose value, understood in terms of symbol and metaphor, can overwhelm these utilitarian considerations.
Politics and economics, in other words, establish lower and upper bounds for all utilitarian functions, whose costs and benefits are continually assessed on the basis of the profitable accumulation of wealth within a competitive global economy. Simultaneously, an artistic sensibility, also driven by competition, often contorts buildings into increasingly untenable forms. With utility both constrained by politics and attacked by expression, buildings—especially those that aim to be fashionable and avant-garde—often experience various degrees of utilitarian failure.
The political constraints and expressive tendencies affecting architectural utility are separately examined in the two parts of this book, while an epilogue looks at the implications for architectural education.
Jonathan Ochshorn is Professor of Architecture at Cornell University, USA. He is a practising architect and is author of the textbook Structural Elements for Architects and Builders.
REFERRAL LINKS:

TRAILER:
dDAB COMMENTARY:
Little did I know at the time, but one year before I started my undergraduate degree in architecture in 1991 the Americans with Disabilities Act was signed into law. By the time I was designing buildings in studio a few years later, discussions about the implications of ADA on architectural design were prevalent in school. Eventually we had to take into account ramps, wheelchair turning radiuses, and other aspects of ADA in our designs, but for the most part accessibility was limited to knowing parts of the code and how it could be integrated into the concepts that were the drivers of our designs. In one class we did bring in a younger student who used a wheelchair to get a firsthand account on navigating buildings and help us figure out what a building designed for such a disability might be like, but he professed to prefer one-story buildings without any inclines, something I didn’t find helpful at the time. By the time I graduated and got a job in an architecture firm some years later, ADA was firmly entrenched in practice, such that many of the projects I worked on back then involved an accessibility consultant (these were mainly public schools,  mind you, which have unique ADA requirements for children).
But architects’ awareness of accessibility hardly means they design buildings that do not require retrofits to remedy certain features that are hazardous to people in wheelchairs, who are blind, or have other disabilities. Take Milstein Hall, the building designed by OMA as an extension of the College of Architecture, Art and Planning (AAP) at Cornell University in Ithaca, New York. The building has canted glass walls and angular columns that fit into the definition of “protruding objects” that are potentially hazardous to people with impaired vision who require a cane to navigate close to walls. To eliminate the risk of people hitting their heads on those glass walls and columns, cane detection devices were later installed at Milstein Hall after the building opened in 2011 (first spread, below). A number of these situations are documented in photographs in Jonathan Ochshorn’s Building Bad, which takes issue with the OMA design in the chapter on accessibility: “None of the protruding objects in Milstein Hall have a utilitarian (functional) basis,” neither the sloped curtain wall that is “entirely expressive” nor the angled concrete column that was structurally unnecessary but was nevertheless maintained from schematic design to construction to go “along with the architect’s aesthetic sensibilities.”
The subtitle of the book, How Architectural Utility is Constrained by Politics and Damaged by Expression, expresses the two parts of Building Bad: “The Function of Utility” and “The Function of Expression.” The chapter on accessibility falls into the first part, where Ochshorn looks cynically at building codes that also address health, safety and welfare; structure; fire safety; light and air; and other considerations. He does not believe that governments institute building codes to protect the people that occupy the buildings in their jurisdiction. Rather, as he writes in the first chapter of the book, on the HSW triumvirate, “all state intervention [is] undertaken, not out of some freestanding moral impulse, or to maintain order, but rather to promote the accumulation of private wealth.” He cites executive orders indicating that regulatory action should be in place only if benefits outweigh costs, and in the accessibility chapter he quotes Congressman Steve Bartlett explaining how the 1990 law “will result in cost savings to the Federal Government” by enabling disabled people to gain employment and therefore contribute to society by spending the money they make. Furthermore, ADA has not mandated accessibility in existing, non-Federal buildings; if it did more than 135 of the NYC subway’s 472 stations would actually be accessible, something the MTA is finally working on.
If the first part of the book examines how architects deal with (or avoid) practical considerations that have questionable or deceptive foundations, the second part takes architects to task for how they use some of the practical aspects of building (structure, sustainability, function, etc.) for architectural expression. OMA’s Milstein Hall (apparently a favorite target for Ochshorn, a professor at Cornell) reappears in the chapter on structure, “Expression of Structure” (second spread), which lists four types of “structural inefficiency and dysfunction:” “increased cost, cracking of adjacent material, thermal bridging, and dysfunctional geometry.” The OMA building is featured in the last two types; its exterior steel columns are an example of thermal bridging (third spread), and the second floor’s cantilever over an adjacent road meant it could not be used as a library, which was a potential programmatic component at one point. To counter such critiques, does the author present commendable instances of architects “building good”?  No, not explicitly, at least. So, combined with the epilogue, in which he traces the actions of the architects in the two parts of the book to academia, where they are prolonging the bad practices of prioritizing aesthetics over science, Ochshorn appears to be fine making more enemies than friends. Still, with most of the building-bad examples coming from the 0.01% of high-profile buildings designed by big-name architects, it’s safe to say there are plenty of good buildings out there that deserve attention. Unfortunately they are often overlooked by the eye candy that ends up grabbing our attention — and Ochshorn’s as well.
SPREADS: 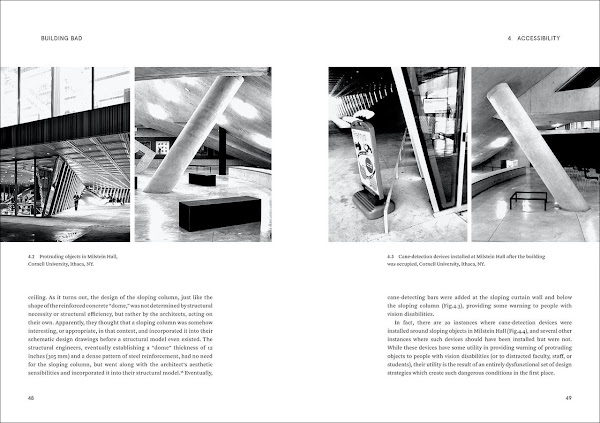 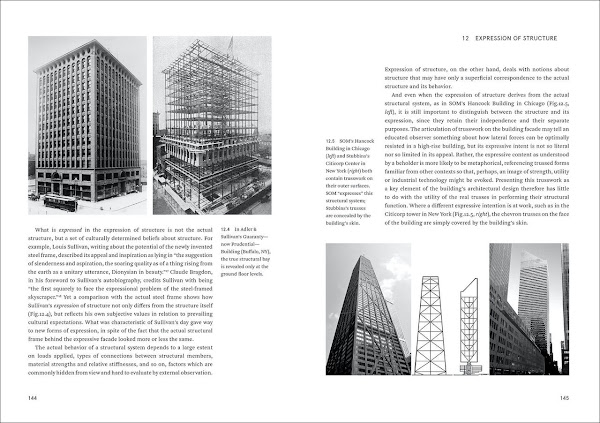 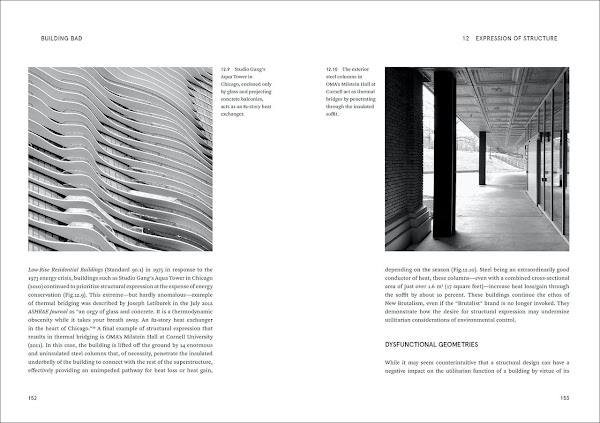