Celebrating its 15th anniversary this week, Studio Anorak is an independent kids publisher established in 2006 by Cathy Olmedillas that pioneered a new aesthetic and concept in children’s magazine publishing. Releasing Anorak Magazine and DOT four times a year, its ethos is to put creativity and joy at the heart of childhood.

Anorak Magazine is ‘the happy mag for kids’ and is aimed at boys and girls aged between six and 12 years old. DOT is aimed at pre-schoolers. Both titles are unisex and sold worldwide online, in kids boutiques, museum shops and newsagents. What’s particularly special is that both magazines are built to last, printed on real recycled paper with vegetable ink. “It makes them smell nice, and it is at the heart of our commitment to provide kids with a calm, immersive, fun piece of culture,” so says Anorak.

Studio Anorak’s main philosophy is to encourage children to “tap into their imagination, use their creativity to learn and help amplify their voices”. Interestingly, Studio Anorak is also an illustration and content agency that works with museums, brands and cultural associations. We sat down with Cathy to chat about the epic birthday milestone.

Can you tell us the inspiration behind the magazine? How did it come about?

I worked in independent publishing in the late 90s for magazines like The Face and was secretly hoping to launch my own. I became a Mum the early 2000s, and I realised that the children’s magazine market was really poorly served, so that’s when the idea crystallised.

A friend knew the artist Supermundane, so she introduced us, and we started working together. I took a dummy to a few distributors, who all rejected it. I decided to go directly to Borders and Tate Modern, and each placed an order! We launched an online shop, and I jumped on social media, got some press from The Guardian, and things got rolling from there. 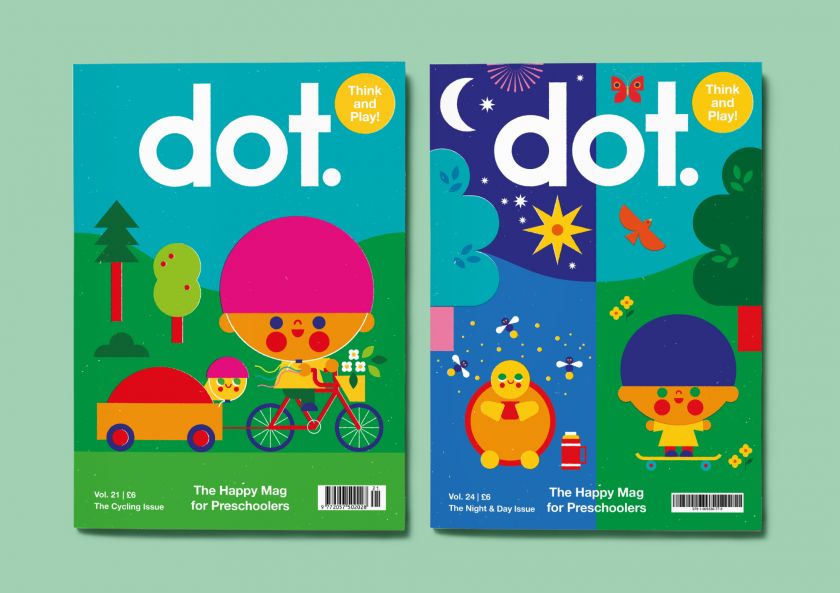 How do you make it work, running both a publishing firm and a creative studio?

Also freelancing. I actually don’t know, except that I have somehow managed to master a way of working which is super efficient!! I fully use the nine to 10 hours I have in a day, and I have a keen sense of what needs my attention and how much I spend on it.

My creative brain is always on, so ideas can come at any time, which I record on notebooks. I tend to leave anything to do with writing and commissioning on quiet Sundays. Weekdays are varied, depending on whether we have a studio project or whether I am freelancing. If I am fully on Anorak, I tend to focus on admin tasks, answering emails and social media scheduling.

Do the two complement each other?

They certainly do, as they are led by the same ethos: to bring joy through the means of creativity. Brands often come to us to make magazines, and the briefs usually are: “we want our own Anorak.” The pool of illustrators we use for the magazine is similar to the one we use for our studio, too, or at least we keep that same style. 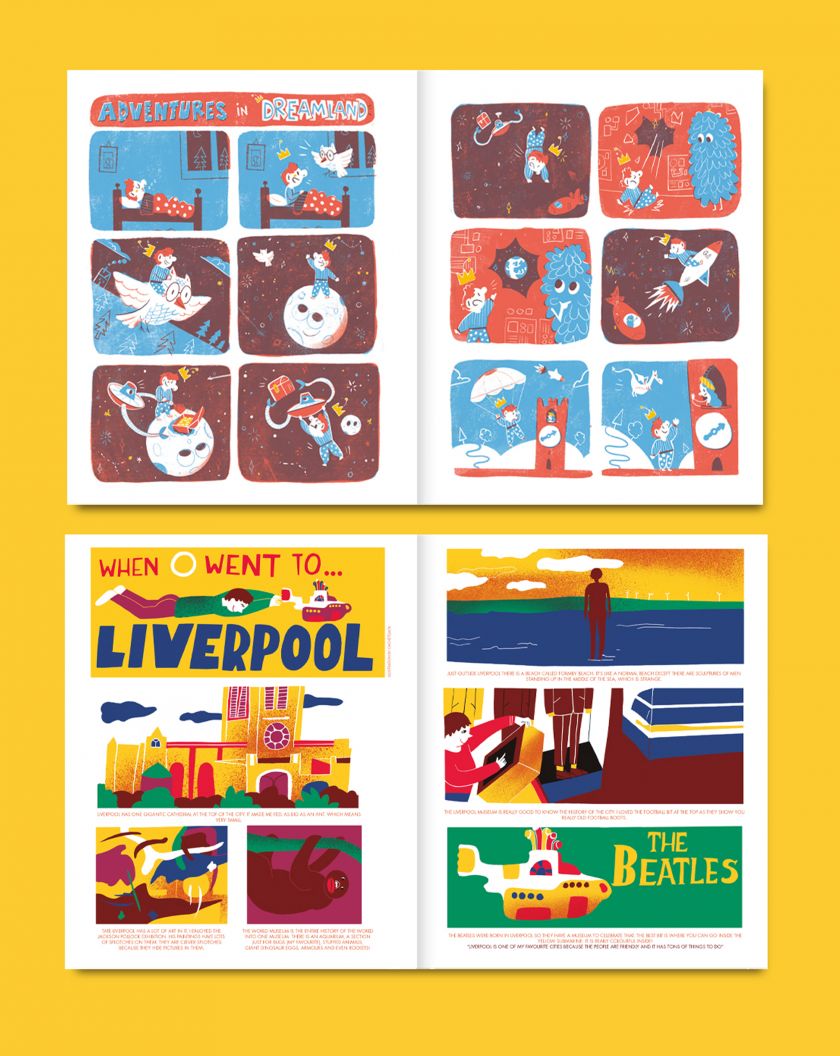 How are you celebrating 15 years?

I am just spending it with a few ice creams and a pause to reflect and bask in that achievement! But the big news to celebrate our 15th is that we are launching our own books! This new imprint is called Paper Turtle, and we aim to publish non-fiction books to start with which have the same ethos of tapping into children’s natural creativity and bringing joy. We are bringing out a series of small colouring books, and a there’s DOT’s Jokes book is in the making too for Christmas.

What did that first issue cover?

The first issue was about SPACE – because it was the ‘launch’ issue. Apart from carrying some fun illustrated stories, it also had a feature – all driven by questions asked by one of Little Editors – about planets, what type of food astronauts eat. There was a fashion shoot with kids floating in space. The content was a lot more ‘lifestyle’ than it is now. I quickly fell in love with writing stories and thought they’d be more nourishing for kids than a fashion spread!

Surprisingly nothing that crucial. Having a remote team is now ‘a thing’ whereas pre-pandemic it was unusual. Social media is over-saturated compared to 15 years ago when the content was fresh and new. But the important bit – which for us is to inspire with the joys of creativity – is even more relevant now than 15 years ago. National curriculums worldwide are not focusing on or downright getting rid of the arts, so parents are looking for ways to keep their kids creative outside of schools. They tell us we play a part in fostering that, which is a source of huge pride! 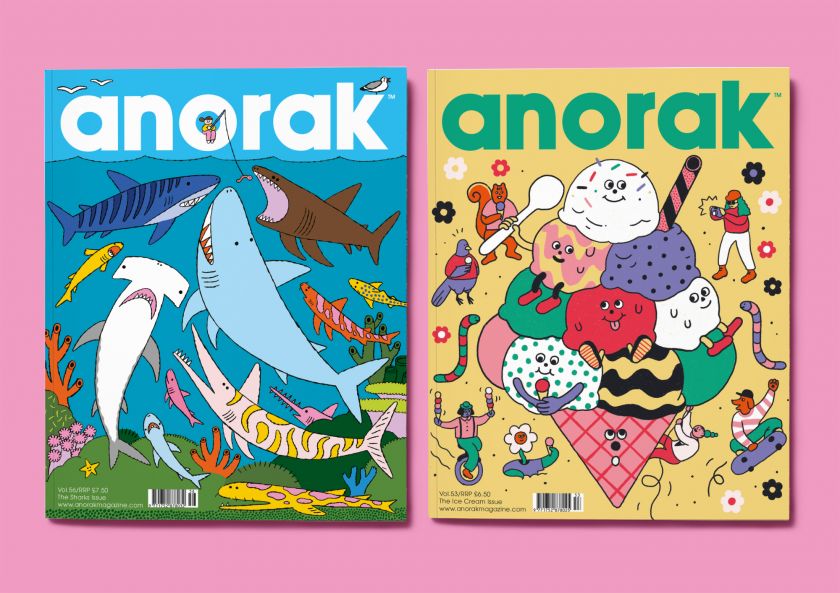 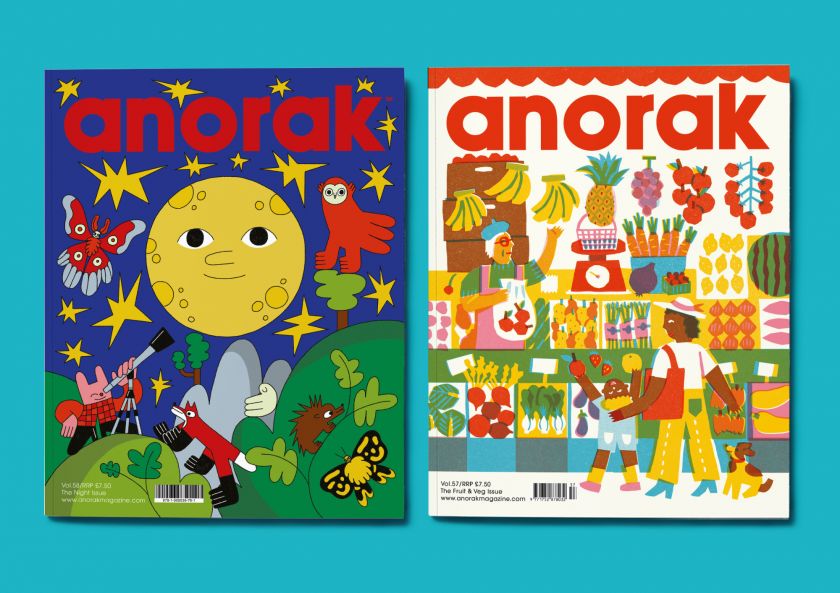 What have been the biggest lessons?

The biggest lesson is that there is no right or wrong way to run a business. I realised a few years into it – once I went through a financial crisis – that I needed to make it work for me, in whatever shape that might take. I used to make plans and then cry because those plans didn’t go as expected, but I have learnt to trust and go with the flow. My passion for making it is the most important motivator because – without sounding too self-important – it does bring our audience and myself a lot of joy!

And the proudest moments?

My proudest moments are when parents write to us about the impact we have had on their kids’ creativity and mental health. It’s so wonderful and humbling to read some of the emails we receive.

My other proudest moment is to see illustrators we have launched or nurtured doing well. I didn’t realise this until not so long ago, but for many illustrators, we have been their first commission which then kickstarted their careers. That’s just the best feeling! Of course, thriving during a pandemic is also another one. 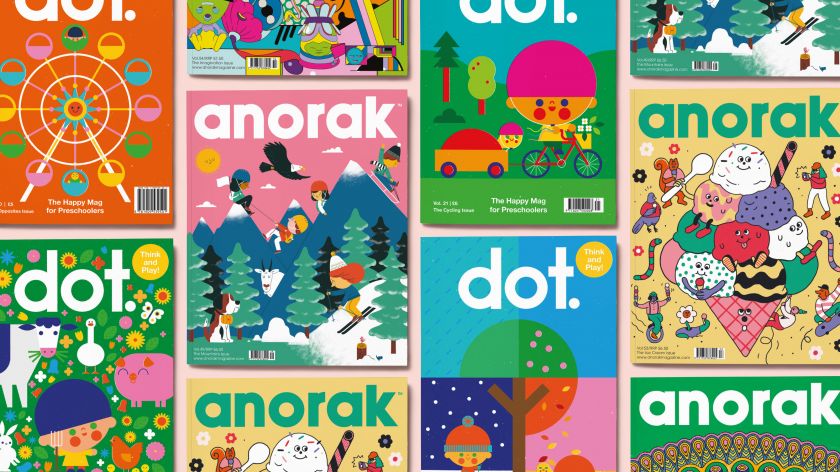 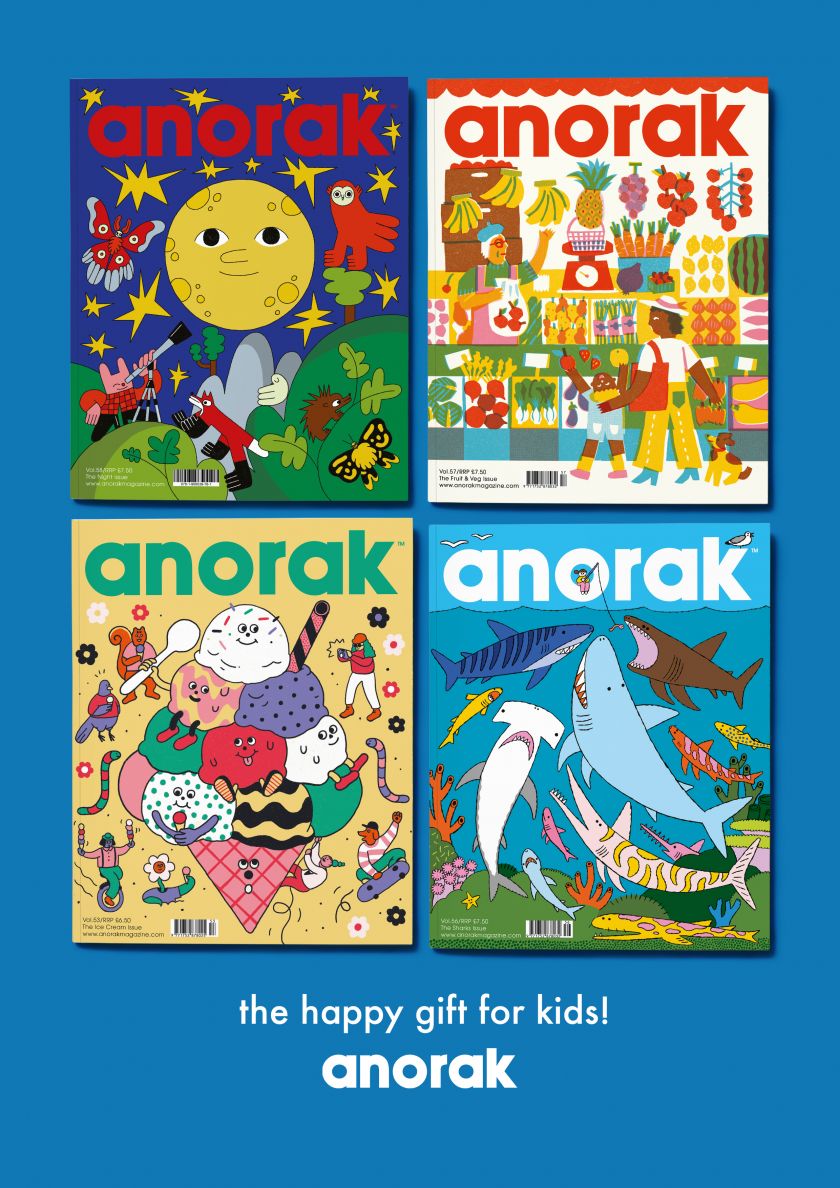 You’re doing a podcast now, too?

Yes! We launched Series One in September, and it’s been the best fun to put together. The premise is that our Little Editors ask questions, and we get a series of experts to answer them. Each episode is based on a theme that Anorak has explored. Honestly, making it was the shining light we needed during the second lockdown!

The questions that our Little Editors asked were precious (“How do whales pee?”), and we got an amazing panel of bright and diverse guests, like rock stars, scuba divers, architects and ice cream makers! Season Two is out in January, so expect more of the same fun!

Can you tell us more about Little Editors?

We love our Little Editors! They’ve been there since the launch, and of course, now some are grown-ups who are doctors or illustrators even! It’s a free scheme open to all children under the age of 12 from anywhere worldwide. They register via our site, and we send them drawing, writing and podcasting missions! All their contributions get featured on our site in our Happy Gallery, which generates a sense of pride in them, and for us grown-ups, it’s always uplifting to look at all these beautiful and bonkers drawings.

What’s next for you?

To keep making Happy Mags, Happy Podcasts, and now Happy Books.
I would also like to find an Operations person or MD to look after the business side of our studio because it’s getting tougher to do both creative and business on my own. So if anyone out there wants to apply, please do so via our site! 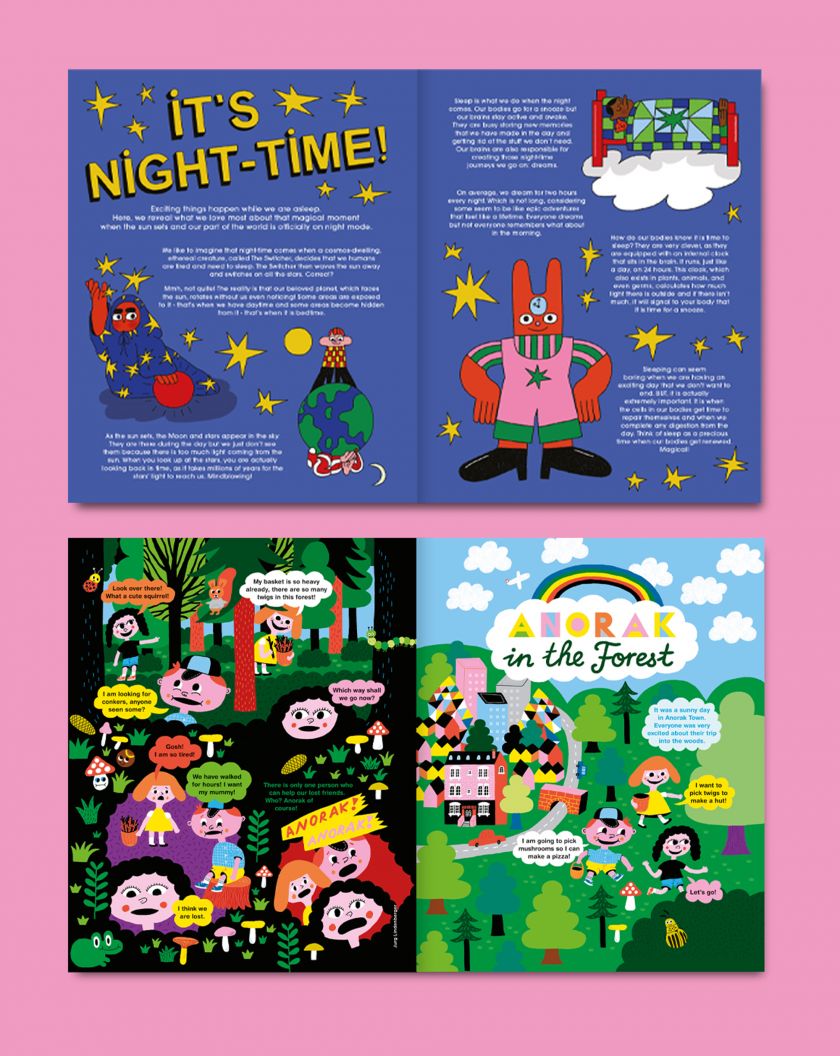