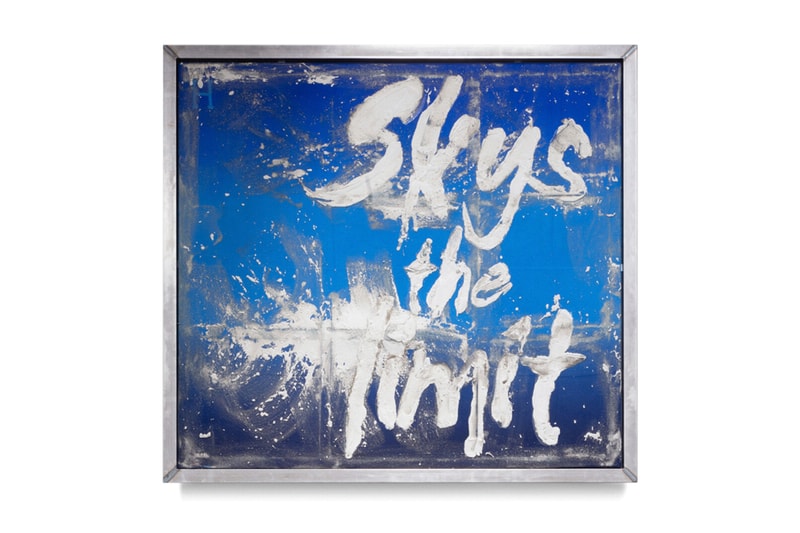 Alvaro Barrington is a Venezuelan-born artist whose mixed media works comment on identity, cultural exchange and nostalgia. Raised in both Greneda and New York City, the artist is now based between London and Brooklyn and is currently showcasing his first LA exhibition at Blum & Poe.

91–98 jfk–lax border is the artist’s way of saying thank you to the real and fictional icons who’ve come before him. “When the bro Chadwick Boseman died,” said Barrington in a statement, “so many of us felt a huge pain and deep loss…It made me think of how I can’t even imagine the pain a generation must have felt when a real king—Dr. King, Malcolm, and the Panthers—got taken from us.”

The artist paints a somber reflection on the harsh realities of the Black experience, noting that instead of “love and support,” his community instead received “Reaganomics and new Jim Crows, along with other new systems of hate.”

Sprawled across the gallery space are a number of mixed-media sculptures and paintings made up of a dizzying array of materials and pop-cultural references — from the Pan-African activist Marcus Garvey and hip-hop legends in the late DMX and Biggie Smalls, to more discreet allusions to the cacao trade by painting on canvases made in burlap. 91–98 jfk–lax border is in its final month and will conclude in LA on April 30.

In case you missed it, France and Spain announced a monumental series of exhibitions to honor the 50th anniversary of Pablo Picasso’s death.

One Rendering Challenge 2022: The Finalists (Part 4)